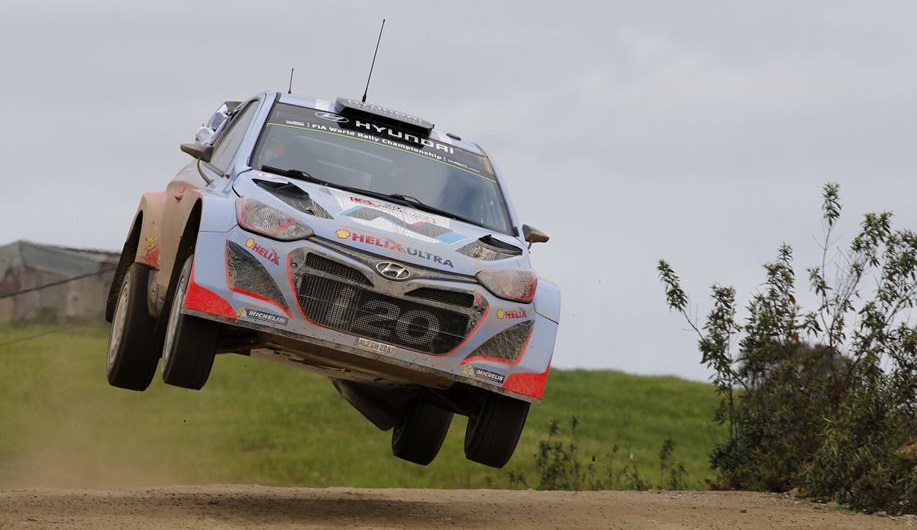 May 18, 2015  Hyundai Motorsport returns to Europe for Rally Portugal after two events in the Americas.

We are excited to return to action in Portugal this week for the fifth round of thirteen in the 2015 WRC calendar. The rally will be moving from the southern Algarve back to its base in the north of the country for the first time in fourteen years.

Our Hyundai i20 WRC cars will be driven by Thierry Neuville, Dani Sordo and Hayden Paddon. The team recently completed a six-day test on a variety of roads and will be looking for a positive result on Portuguese soil. Thierry and Dani have experienced some of the roads before, when they competed in the Fafe Rally Sprint that is held at the Fafe-Lameirinha stage.

Using our knowledge from the test and our drivers’ experience from Fafe we will keep trying to collect Manufacturers’ points in order to regain second place in the Championship. The new stages mean a lot of recce and pre-event preparation are needed. “No one should have a big advantage because it’s a new event for everybody,” states Team Principal Michel Nandan. “There will be some surprises but our drivers are happy to try something different.”

Thierry has participated in Rally Portugal four times and will use his experience to try and achieve a good result this weekend. “I really hope to find good settings straight away,” says the Belgian. “We’re looking to have a clean run this week.”

Dani will enjoy support from thousands of fans coming across from neighbouring Spain. “From what we know from Fafe, and from testing, the stages are really nice so I’m really looking forward to driving there. The atmosphere will be great and we’re really hoping for a good result.”

Hayden has good memories of Rally Portugal after winning the SWRC and PWRC categories there in the past. “It’s great being back in the north for Rally de Portugal,” says the young Kiwi. “For me, the key is to be consistently fast. We are ready to step up our pace.”

The 49th edition of Rally Portugal returns with traditional stages like Ponte de Lima being used for the first time in over ten years. On Thursday 21st May, the starting ceremony in Guimarães will be followed by a Super Special Stage at Lousada. The event base will be at the Exponor fairgrounds. Friday will see the Spanish border stages run twice and Saturday will have six stages near Amarante, including the 37.67km Fridão stage. Sunday will feature the famous Fafe stage run twice, also as the Power Stage.