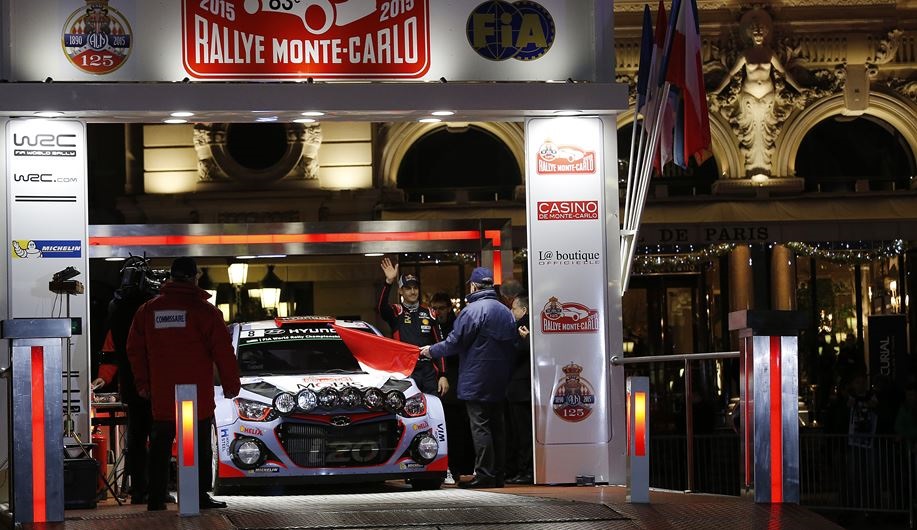 January 22, 2015  Hyundai Motorsport has kicked off its second season in the FIA World Rally Championship (WRC) with typically demanding conditions greeting drivers on the first day of this year’s Rallye Monte-Carlo.

Sub-zero temperatures and icy conditions have made for a challenging start to this first rally of 2015 with many drivers encountering problems in the opening two stages. Tyre choice has, as usual, played a decisive role but for Hyundai Shell World Rally Team drivers Thierry Neuville and Dani Sordo the objective has been to make it safely into the second day, which they both accomplished.

Neuville had a generally trouble-free start to the rally and tackled the two stages sensibly. Having retired on the opening day of last year’s event, the Belgian has limited experience of driving in such conditions and wanted to ensure a safe passage through to Friday. Sixth place in SS1 (Entrevaux-Rouaine) and tenth in SS2 (Norante-Digne-les-Bains) sees him classified eighth overall after 41 competitive kilometres.

Neuville commented: “It is great to be back in competitive action but what a tough start it has been here. We faced some very demanding conditions in today’s stages, so safety was our top priority. We had a decent run in the first stage. I am not so used to driving on frozen conditions like that so it required a lot of concentration. The second stage was a bit dangerous so I kept a safe pace so we could make it to the end of the first day. Let’s see what tomorrow brings, but for sure we will need to keep focussed at all times if conditions continue like this.”

Sordo had an eventful first day on his second Rallye Monte-Carlo with Hyundai Motorsport. He ran into trouble early in the first stage after he braked too late in the treacherously icy conditions and went straight on into a ditch. Co-driver Marc Martí had to push the car back so the duo could complete the stage but with damage to the front-right light pod, they lost thirty seconds of time. The Spanish crew fought back in SS2 with a fine run to sixth place despite not running with the ideal tyres for the stage’s dry conditions. Nevertheless, Sordo will start the second day of the rally 12th overall with many more challenging stages still to contest.

Sordo said: “I lost a lot of time at the start of the opening stage. Before the first split time, I braked too late in the very slippery conditions and went straight on. Unfortunately, we went into a ditch and so Marc had to push the car out so we could re-join. We lost about thirty seconds of time which was not how we wanted to start. In the second stage, I had studded tyres on, which wasn’t the correct choice in the drier conditions. I was also struggling with visibility. However, we have completed the first day and can look to finding some improvements on Friday.”

Hyundai Motorsport was keen to erase the memories from its debut rally at Monte-Carlo twelve months ago in which both cars were forced to retire. Getting both cars to the end of the first competitive day of rallying  in extremely demanding conditions  allows the team to focus on making up ground over the coming three days of action.

Team Principal Michel Nandan said: “Rallye Monte-Carlo is one of the most gruelling events on the calendar and it is therefore a huge challenge to begin our second season in the WRC. As a team, we have come a long way since our debut rally twelve months ago and our approach to today’s tough stages is proof of that. Both Thierry and Dani made sure that we have two Hyundai i20 WRCs at the start of the second day, which is all we wanted. Thierry drove carefully in conditions with which he doesn’t have as much experience. I am sure that will give him more confidence for the rest of the rally. Unfortunately, Dani had a slight off in the first stage but the crew recovered well to make it to the end. They put it quickly behind them and can now look to regaining some of that lost ground tomorrow.”