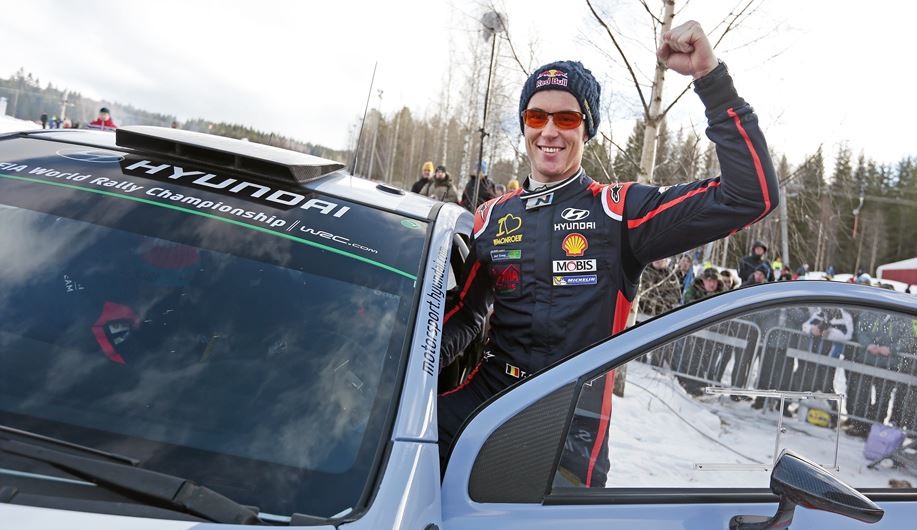 February 15, 2015  The Hyundai Motorsport team will step onto the WRC podium for the fourth time in its short history as Thierry Neuville (#7 Hyundai i20 WRC) stormed to second place in Rally Sweden, round two of the FIA World Rally Championship.

The team has been in the thick of the action from the outset of the 21-stage rally, with Neuville firmly among the pace setters all weekend. The victory fight went right down the final Power Stage with 4.6 seconds separating the trio of contenders heading into the last 15.87km stage.

Neuville took the first stage win of the season for the team on Friday and was placed second at the end of the opening day. He then added a further two stages wins in Saturday’s SS15 (Fredriksberg 18.15km) and SS18 (Vargåsen) to sensationally take the lead as the penultimate day came to an end. In Saturday’s final stage, he also jumped 44m to break the legendary Colin’s Crest Award record. The Belgian adopted a measured approach to Sunday morning’s stages to ensure he kept fully in the hunt for the victory right to the end, and the runner-up position was well deserved.

Neuville said: “What a rally this has been! We have not had such a close battle for the victory for a long time and it has been great to be a part of such a thrilling finale. Nobody really expected us to be challenging for the win here, so it has been a brilliant performance. Of course, I pushed hard to get the win, taking quite a few risks, and I could honestly not have done more. A second place is still a very nice result for me and for everyone in the team, who have worked hard.”

Hayden Paddon (#8 Hyundai i20 WRC) has had a strong start to his second season as part of the Hyundai Motorsport line-up. Fifth place is the New Zealander’s best result in the World Rally Championship, one place higher than his previous best with the team (2014 Rally Australia). Alongside co-driver John Kennard, Paddon has adapted his driving style this weekend to suit the characteristics of the #8 Hyundai i20 WRC and the unique challenges posed by the wintry Swedish stages. His fifth place secures 10 manufacturer points as part of the Hyundai Shell World Rally Team.

Paddon commented: “It’s been a good rally for us overall and very important to gain the experience in these demanding winter conditions. After finishing Friday’s stages in sixth overall, we’ve looked at cementing that position and building up a buffer. We have had to work a lot on adapting the driving style to the set-up of the car and to the special requirements of these stages. I am pleased with how we have tackled this rally and the improvements we’ve made. We’ve definitely had some good moments  as well as some struggles  but to finish in the top five is a really good result and scores some important points for the team in the Manufacturer’s Championship. I think we’ve achieved all we could and it’s definitely a good base on which to build for Mexico.”

Rally Sweden weekend has been a valuable learning curve for Kevin Abbring (#20 Hyundai i20 WRC) as he acclimatised to the #20 Hyundai i20 WRC car, and the rigours of a full World Rally event. Scoring 11th in his debut event for the Hyundai Mobis World Rally Team is a great result for the young Dutchman. The added complication of Sweden’s unforgiving snowy and icy conditions means that Abbring and his British co-driver Seb Marshall can reflect on a highly positive event overall.

Kevin Abbring said: “This is an event I certainly won’t forget in a hurry and I am really happy to have finished my first event in the Hyundai i20 WRC. It has been an incredible experience and a real privilege to have tackled these tough Rally Sweden stages. They definitely demand respect. I have built my confidence throughout the weekend and thoroughly enjoyed myself. We’ve had a few moments, which is to be expected in our first event on these conditions, and we lacked rhythm in the pace notes in places, but there are so many positives to take away. The team has been exceptional and have helped me and Seb to find our feet quickly. I can’t wait to get back behind the wheel of the car in my next WRC event.”

For the Hyundai Motorsport team, Rally Sweden has been an excellent event with competitive performances from all three cars. The progress made by the team compared to the same event one year ago is testament to the hard work put in by the entire team, both at the rally and back at the team’s Alzenau factory. Today’s second place marks the fourth WRC event with a podium (Mexico, Poland and Germany 2014) and the first event of the season with a three-car finish. The team can also reflect on three stage wins this weekend, as well as leading the rally, all of which makes for an event to remember!

Team Principal Michel Nandan commented: “This podium is a great result for everyone at Hyundai Motorsport. Our performance level has been encouraging although, at the same time, it is important for us to recognise that there is still a lot of work to do. Thierry has been on exceptional pace this weekend and this second place has been very well earned. Obviously, we benefitted from the misfortune of Andreas in the Power Stage but that is not to take anything away from Thierry’s performance, which was superb. We’ve been in the mix all weekend and to be part of a spectacular finale is very special. A podium, two Power Stage points and second place in both Manufacturers’ and Drivers’ Championships makes for very nice reading!”

“Hayden has also registered his first top five finish with the team  in his first WRC event of the season  a highly commendable result. Kevin has also exceeded our expectations here with a mature rally. He has kept his head down, worked hard and delivered a classified finish just outside of the top ten. I would like to extend a huge thanks to the entire team  both in Sweden and back at Alzenau. It’s not been a straightforward rally and they have shown an immense professionalism of which we can all be very proud.”