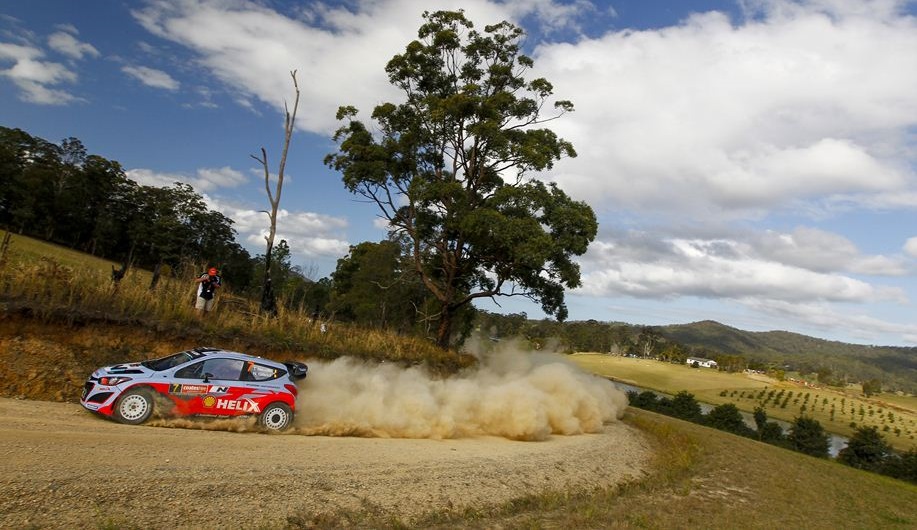 September 13, 2014  All three Hyundai i20 WRC cars have made it safely to the end of the penultimate day of Rally Australia as the Hyundai Shell World Rally Team continues its adaptation to the rigours of the unique Australian stages.

The team has never had the chance to put the Hyundai i20 WRC through its paces on Australian soil prior to this weekend’s tenth round of the FIA World Rally Championship (WRC), so every stage offers a new opportunity to learn. Despite some overnight rain showers, conditions were drier than expected which meant some road cleaning was required for those first to run.

The Kiwi pair of Hayden Paddon and John Kennard (#20 Hyundai i20 WRC) ended the second day of the rally as the top Hyundai Shell World Rally Team crew, holding seventh place overall and embroiled in a close fight for the top six. Paddon has found renewed confidence today, as he used his knowledge of the demanding stages, including the daunting 48.92km Nambucca stage.

Paddon said: “It’s been an ok day for us. I always thought I’d enjoy today’s stages and it is pure pleasure driving the Hyundai i20 WRC here. There are still places where it’s a bit loose and it’s difficult to find the right balance of driving. Nambucca is my favourite stage of the rally and it’s almost like three stages in one. The car has been running well but tyre choice has been quite important. I had one soft tyre on this afternoon which unbalanced the chassis a bit, and I couldn’t push as I wanted. We made some improvements to the differential and I could feel the advantage. I am sure we can regain the sixth place tomorrow, especially during the newer sections where we will have a level playing field against the regular WRC guys.”

Rallye Deutschland winner Thierry Neuville (#7 Hyundai i20 WRC, co-driver Nicolas Gilsoul) has continued to fight back following his suspension damage on Friday and has moved up into eighth place overall. The Belgian crew has enjoyed a trouble-free Saturday and will be aiming to make further progress during Sunday’s six stages, which total 100km.

Neuville said: “I am quite happy with our performance today. We were early on the road and had to do a lot of cleaning but I can’t complain. I have had a lot of fun and the stages really put a smile on your face. We have made up two positions during the day, which will be helpful for tomorrow. We made a good tyre choice this afternoon and have really made the most of our day. We had a small issue on the repeat Valla stage as we lost the front bumper. We didn’t lose any time and it was still a good stage time. I hope we can continue to make up ground during the six remaining stages tomorrow.”

Local hero Chris Atkinson (#8 Hyundai i20 WRC, co-driver Stéphane Prévot) has struggled to find the confidence required to tackle the might of today’s tough stages but has focussed on making it safely through. The Aussie has finished the second day just outside of the top ten, in 11th place.

Atkinson said: “It’s not been ideal today. The car has been working well and has a good balance. Unfortunately I just haven’t clicked into a good rhythm. Once you are off the pace and first on the road, you are on the back foot. I just tried to enjoy the stages, which are really nice, and bring the car to the end of each run. Given our road position, we decided to take a risk with the soft tyre but it didn’t really pay off. I wanted to take a few risks today and push more but the feeling and trust wasn’t there. We’ll see what we can do tomorrow.”

Like all rallies on its debut WRC season, the Hyundai Shell World Rally Team is using this year’s Rally Australia to discover more about the ever-improving Hyundai i20 WRC.

Team Principal Michel Nandan said: “It’s been an interesting day of rallying. The rain overnight didn’t make conditions as wet as expected, which meant there was still a lot of cleaning required for the drivers first on the road  including Chris and Thierry. Tyre choice was important throughout the day but especially this afternoon. Thierry did well to capitalise on a good tyre choice, making up two positions during the day, and performing well despite his position on the road. Hayden has had another solid day and is involved in a very close battle for sixth place, which is good to see. Chris, unfortunately, has struggled to get the confidence he needed to push on the stages but he will be hoping to find improvements tomorrow. We still have over 100km of stages left in this fantastic event so we have to keep focussed and hopefully we’ll make more progress on Sunday.”