The Hyundai Shell World Rally Team has completed the penultimate day of Rallye de France with all three Hyundai i20 WRC cars inside the top ten. 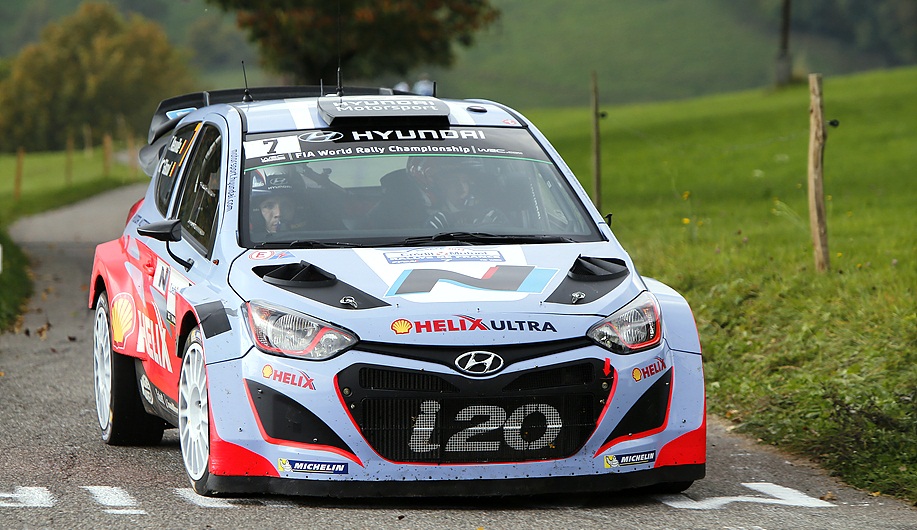 The Hyundai Shell World Rally Team has completed the penultimate day of Rallye de France with all three Hyundai i20 WRC cars inside the top ten.

October 4, 2014  The Hyundai Shell World Rally Team has continued to accumulate valuable experience on the tough tarmac stages of Rallye de France with all three Hyundai i20 WRC cars still running in the top ten at the end of Saturday.

Seven stages have been contested on this penultimate day of the rally  a repeated loop of three stages (Vallée de Munster, Soultzeren-Le Grand Hohnack and Pays Welche-Riquewihr) and an evening Super Special Stage held at Mulhouse. A remote service also took place at Colmar between morning and afternoon loops making it a busy day for teams and drivers.

Dani Sordo (#8 Hyundai i20 WRC, co-driver Marc Martí) continues to lead the Hyundai Shell World Rally Team charge in fourth place overall. The Spaniard has been involved in a tantalising battle for fourth place throughout Saturday with just 0.9s separating him from Robert Kubica heading into the final day.

Sordo said: “We’ve had a very good day and it has been fun to be in such a close battle for fourth place with Robert. I have had a much better feeling with the Hyundai i20 WRC today which has helped us to gain more confidence. We made some adjustments after yesterday and we have seen the improvements in today’s stages. We didn’t need to change much at the remote service and we had a trouble-free afternoon. The times are very close so we will be hoping to continue in this direction in the final stages and we look forward to resuming the fight for fourth place in the morning.”

Bryan Bouffier (#20 Hyundai i20 WRC, co-driver Xavier Panseri) continues to hold a top ten position in his home rally despite struggling with the set-up of his Hyundai i20 WRC today. The Frenchman remains confident of more improvements in the final four stages on Sunday.

Bouffier said: “I am pleased to be in the top ten after today’s stages. We haven’t experienced any technical problems but we’ve been running a hard spring and the set-up of the car has perhaps been too hard for the conditions. It hasn’t been easy to find a rhythm because it has been bumpy and slippery. We made some changes during remote service but we knew it wouldn’t be an easy afternoon. With that in mind, the times are not too bad and we’ll have a bit more to give tomorrow.”

Thierry Neuville (#7 Hyundai i20 WRC, co-driver Nicolas Gilsoul) has concluded Saturday’s seven stages in the top ten overall, which is an impressive feat following his troubles on Friday. The Belgian was not totally confident behind the wheel of his Hyundai i20 WRC in the morning loop but the team made some adjustments during remote service. His run in SS13 was compromised by the zero car’s incident which temporarily halted proceedings but he was allocated a representative time at the completion of the stage.

Neuville said: “It’s good for the team that we have all three cars still running at the end of the second day with all of us inside the top ten. I have struggled with the settings of the car today, particularly this morning, and I wasn’t able to adapt my driving style to feel comfortable and ‘at one’ with the car. The guys made some adjustments during remote service which definitely helped but there is still room for improvement. I have given my best today and we are making good progress, which is the ultimate objective for us this weekend. We have four stages remaining tomorrow to see what more we can get out of ourselves and the car.”

The Hyundai Shell World Rally Team has used the rigours of the French stages to understand more about the behaviour of the Hyundai i20 WRC in the competitive WRC environment. The team will now focus on finishing the rally with all three cars to complete the learning process fully.

Team Principal Michel Nandan said: “Firstly, it has been great to see Dani in the exciting battle for fourth place with Robert. It’s a battle that will continue tomorrow and which promises to run until the very end of the rally. Dani has performed well and he has found a good feeling with the Hyundai i20 WRC in today’s stages. Bryan, too, has made improvements but he has found it difficult to attack the stages with the harder set-up. Thierry has struggled at times but considering his turbo problem on Friday, he has done well to get back into the top ten. Tomorrow, our focus is finding a bit more pace across all crews and finishing the rally with all three cars.”