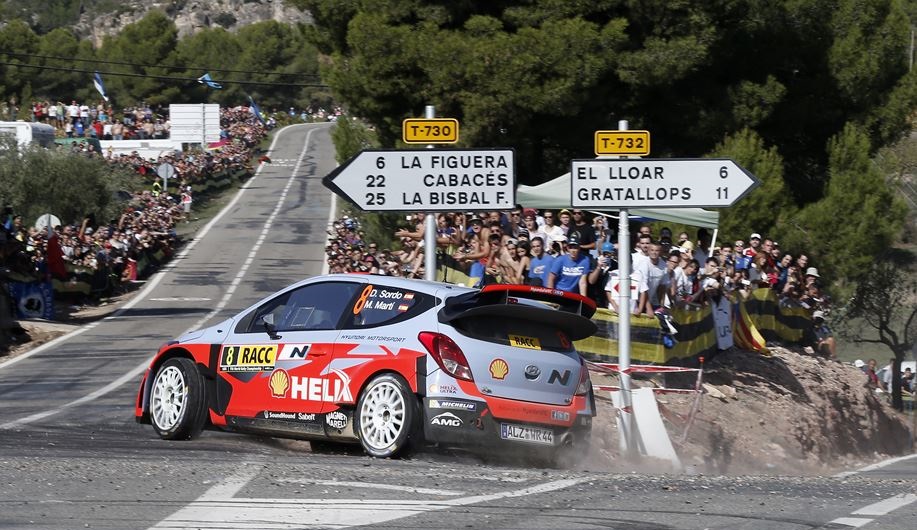 October 25, 2014  The Hyundai Shell World Rally Team has made positive progress on the abrasive asphalt stages seen on the second day of RallyRACC  Rally de España, with all three Hyundai i20 WRC cars running in the top ten as the team continues to gain valuable experience.

Six tarmac stages totalling 159.16km have been completed on the penultimate day of the rally, including two passes of exactly 50km each through the fearsome Escaladei (SS9 and SS11). The morning started with the short Tivissa stage at just 3.96km before heading to the Esacaldei 1 and then Colldejou 1 at 26.48km. These two challenging and abrasive asphalt stages were then repeated during the afternoon before heading back to Salou for the 2.24km super-special stage in front of huge Spanish crowds.

Local hero Dani Sordo with co-driver Marc Martí in the Hyundai i20 WRC #8 continues to lead the Hyundai Shell World Rally Team challenge in fifth place overall. The Spaniard has set a string of competitive stage times in front of his home fans and has been pleased with the set-up of the car on tarmac after the mixed surfaces of the first day.

Sordo said: “We had a good morning with some positive times. The car is good on tarmac and I am happy with our performance. We have a good feeling with the Hyundai i20 WRC and the tyres on these tarmac roads and this is a definite improvement from France. Some of the roads have been very dirty so we have been careful there to avoid any mistakes but overall we are pleased with our progress today and I am looking forward to pushing hard tomorrow.”

Thierry Neuville (#7 Hyundai i20 WRC, co-driver Nicolas Gilsoul) was another driver to be pleased with progress as he climbed up to sixth overall just behind his Spanish team-mate. Also commenting on the improvements in both performance and tyre wear since the WRC round in France, the Belgian was happy to consolidate his position with some competitive stage times while improving the balance of the car.

Neuville said: “This morning was OK. The car felt good and has a lot of potential. I think I could have been quicker but I took it a bit steady as the roads have been quite tricky and dirty, particularly the last section of the long stage. In the afternoon we tried to push a little more, although we continued to lose time in the dirty sections. These roads are very hard on the tyres and we are learning all the time about how to get the best out of the Hyundai i20 WRC in these conditions. Overall I think we are making good progress. We are closer to our competitors than at the last tarmac rally and I’m looking forward to a strong final day.”

Hayden Paddon (#20 Hyundai i20 WRC, co-driver John Kennard) in his first tarmac round of the season has climbed up to ninth place at the end of day two after acclimatising himself with the conditions and the new tyre compounds. With little tarmac testing before the event the Kiwi driver has been building confidence in the hot conditions as he improves his feel with the car over the challenging and abrasive Spanish roads.

Paddon said: “I needed to adapt my driving today as I got used to the feel of the new tyres on tarmac. The car felt that it was moving around more than I’m usual and I was lacking the confidence to push, particularly as the front end was understeering when I got on the power early. However, we are learning and improving all the time and this afternoon was much better. We still need to make some minor adjustments but I’m looking forward to a positive day tomorrow.”

After a day of strong performances and mixed fortunes on day one, the emphasis on day two has been on continual and consistent improvement. With the primary objective of getting all three Hyundai i20 WRC cars to the finish, all three drivers have been careful to avoid mistakes on the difficult Spanish roads where corner cutting corners and loose gravel add to the challenges.

Team Principal Michel Nandan said: “It has been a day of consistent improvement for all three drivers as we aim to refine our performance. Dani and Thierry have shown good pace while being careful to avoid the dangers on the dirty roads. Hayden has improved throughout the day as he has built his confidence in the car and the tyres. It has been interesting for us to test these tyres and to optimise the performance of the car in such difficult conditions. The rally, with mixed surfaces yesterday and the abrasive surface and high temperatures during this afternoon, has proved so far very valuable in gathering data as we continue our learning from the 2014 season. ”