Hyundai Shell World Rally Team continues to face the challenge of Rally Finland, one of the most daunting events on the calendar, with two Hyundai i20 WRC cars in the running. 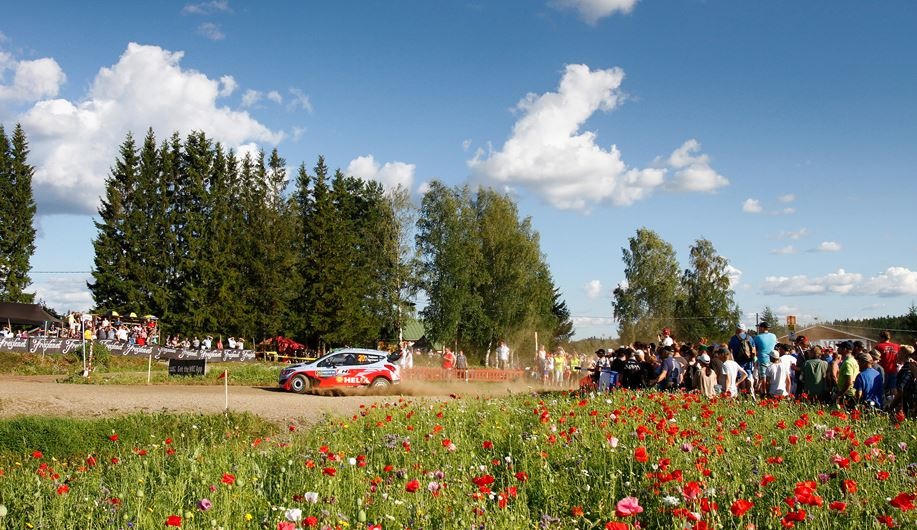 Hyundai Shell World Rally Team continues to face the challenge of Rally Finland, one of the most daunting events on the calendar, with two Hyundai i20 WRC cars in the running.

August 1, 2014  The Hyundai Shell World Rally Team has ended the second day of Rally Finland with two cars still running solidly in the top ten after a challenging day run over eight stages and 131 rally kilometres. Unfortunately, the team was forced to retire the #7 Hyundai i20 WRC at lunchtime service after damage sustained to its protective roll cage during the first stage of the day.

At the halfway point in the rally, with 13 stages complete out of 26, the #20 Hyundai i20 WRC car of Kiwis Hayden Paddon and John Kennard holds seventh place in the overall classification with home heroes Juho Hänninen and Tomi Tuominen in ninth spot.

It was a tough day in the office for Belgians Thierry Neuville and Nicolas Gilsoul (#7 Hyundai i20 WRC) who encountered difficulties from the first stage of the day  14.5km Pihlajakoski. The crew were on the pace at the 9.4km split but went wide into a corner and clipped a stone; they subsequently hit a tree which caused significant wing damage. The effect of the damage was sufficient to prevent them from pushing in the remaining three stages before lunchtime service but they kept going nonetheless. During the service, the FIA technical delegate inspected the #7 car and deemed that the roll cage had been irreparably damaged in the SS5 incident and so the crew were forced to retire.

Neuville said: “It has been a really disappointing day for me and it’s such a shame that we have had to retire from the rally. We were hoping to make improvements after the tough start yesterday but in the first stage this morning, we went too wide into a corner and just clipped a stone. We lost the rear of the car and made contact with a tree which caused damage to the wing, which slowed us down a lot in the following stages. We focussed on getting to the end of each stage to make it to lunchtime service but we had picked up damage to the roll cage which was too severe to continue. We will now concentrate on coming back stronger in Germany.”

Flying Finns Hänninen and Tuominen (#8 Hyundai i20 WRC) got their Friday off to a great start by setting the second quickest time in SS5, just 0.4s from the pace-setting time. SS6 (Päijälä 23km), however, saw the Finns pick up a puncture at the beginning of the stage and roll the #8 car losing them over a minute of time. Thankfully, they were able to make the finish of the stage and carried out some immediate repairs to their car  including removal of the windscreen  in order to continue to lunchtime service. Damage to the dashboard initially lost them further time at the start of SS7 (Kakaristo 20.50km) but they soon picked up the pace once again. Following service, the Finns were fourth in SS9 (Pihlajakoski 2) and ended the day back up in ninth place after an eventful day.

Hänninen said: “We have had a bit of a turbulent day today, really. We started off very strongly with a competitive stage, just a fraction off the pace, but then in stage six we ran into trouble. We picked up a puncture and rolled the car. Thankfully we were able to continue but we lost over a minute. Tomi and I tried to make some repairs to the car, including taking the windscreen off, which certainly made driving conditions interesting! The mechanics did a great job at service to get the car back into shape and we were on the pace again quickly. During the afternoon, we experienced some power steering issues, particularly in the ruts and jumps, but we are fighting back and I am determined to finish the final two days strongly in front of this fantastic home crowd.”

Kiwis Paddon and Kennard, in just their third event as Hyundai Shell World Rally Team drivers, were on strong form today. They were fourth in SS5 and SS6 and enjoyed a fault-free Friday to make their way up into an encouraging seventh overall at the rally’s halfway point. The performance of the #20 Hyundai i20 WRC enabled the crew to get the maximum out of themselves and to get into a rhythm through Finland’s notoriously complex stages.

Paddon said: “Overall, I am pleased with our progress and our performance today. We had some good stages this morning when we could capitalise on the level playing field, with no-one knowing the stages. We gave a good account of ourselves, I think, and it’s been pleasing to set some competitive times. Obviously, Thierry and Juho have had some issues today so we are the leading crew for the team, but we know there is a long way to go yet. We’ll just keep working hard to find the good rhythm, learning all we can for ourselves and for the team in the process.”

The retirement of the #7 car will prevent the Hyundai Shell World Rally Team from achieving its pre-event objective of a three-car finish but the pace shown by the crews at times has given the team some useful information about the performance of the car in the tough Finnish stages. The team will now look to Saturday’s demanding schedule of ten stages, to learn more about the Hyundai i20 WRC cars and for Hänninen and Paddon to make further improvements to their overall classification.

Team Principal Michel Nandan said: “It’s been a mixed day for us with some positives and some disappointment. Juho made a great start this morning to set the second quickest stage time in SS5 but he then ran into trouble which impacted his morning. The mechanics did an excellent job to get him out for the afternoon, when he returned to form. He experienced some power steering issues at times which we will need to investigate tonight. Thierry has had a frustrating day but unfortunately the damage sustained to his roll cage in the SS5 incident could not be repaired. It’s obviously very disappointing to lose a car but it is one of those rallying incidents that we have to endure sometimes. I’m happy with how Hayden has progressed today; he has shown promising times and pace which is especially impressive in only his third event with our team. We continue tomorrow with two cars in the top ten but it won’t be an easy day with the road positions. We will stay positive and continue our learning, which is the main objective.”