The Hyundai Shell World Rally Team have cemented their hold on a podium position after the penultimate day of action at Rallye Deutschland, with two cars running in the top four. 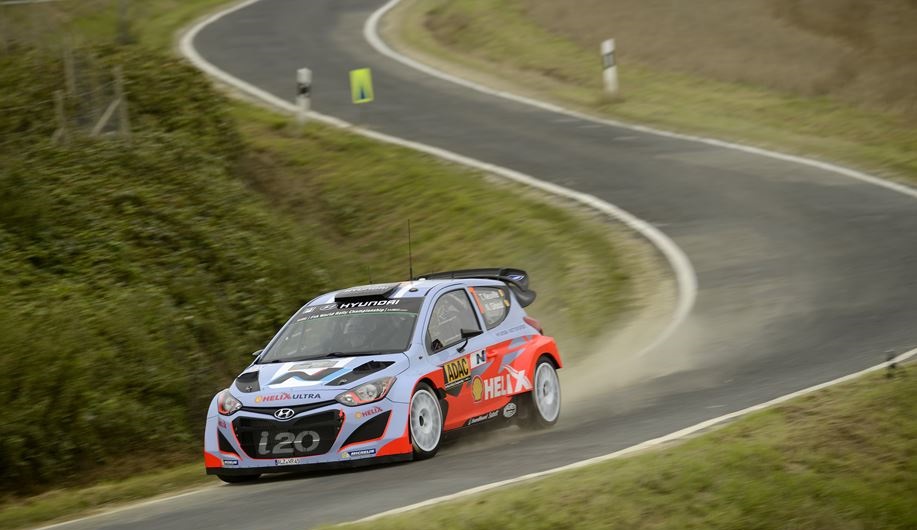 The Hyundai Shell World Rally Team have cemented their hold on a podium position after the penultimate day of action at Rallye Deutschland, with two cars running in the top four.

August 23, 2014  The Hyundai Shell World Rally Team continues to thrive in the demanding tarmac conditions of Rallye Deutschland with two Hyundai i20 WRC cars in the top four and in with a chance of securing a podium in the Alzenau-based team’s home rally.

The penultimate day of running was shortened to seven special stages after SS8 (Peterberg 1) was cancelled. Still, drivers negotiated almost 140km of stages on Saturday, including two passes of the monstrous and unforgiving 42.51km Panzerplatte stage. The weather has also played a role today with rain affecting the start of the afternoon loop.

Thierry Neuville (#7 Hyundai i20 WRC, co-driver Nicolas Gilsoul) has been one of the standout performers today as he registered top five times in all stages, including three second places. The Belgian made the most of his competitiveness to move into the podium positions by lunchtime service, having started the day in fifth. An equally strong afternoon enabled Neuville to reduce the gap to second place to just 4.3 seconds.

Neuville said: “We have had a strong day and I am very pleased to be holding a podium position heading into the final day. Of course, there are still four stages remaining on Sunday but we are looking in good shape. This morning, we made a good tyre call on the long Panzerplatte stage to select the hard Michelin tyre and this afternoon we have also set some good stage times. We are in a very exciting battle not only for the podium but also trying to keep pace to Kris in second. I look forward to resuming the battle tomorrow and we’ll do all we can to secure our third podium of the season.”

Dani Sordo (#8 Hyundai i20 WRC, co-driver Marc Martí) continued where he left off on Friday, showing his class to defend his overnight third place in Saturday’s opening stages. The Spaniard had to concede the place to a resurgent team-mate, Neuville, before lunchtime service but continued to hold fourth for the remainder of the afternoon despite losing time in SS12 (Peterburg, shortened to 9.37km) after a small off caused by standing water which caused him to aquaplane.

Sordo said: “I am pretty happy with our performance today and to be holding fourth place. The first stage this morning was very muddy and slippery so we didn’t have much confidence but we were able to pick up the pace again in SS9 and 10. We made a good tyre decision for the first Panzerplatte run, using the hard tyre, but we were perhaps a bit too cautious on the damp sections. In the afternoon loop, I pushed hard in the first stage but the wet conditions in SS12 gave us a big moment when we aquaplaned and went into sixth gear. That cost us some of time, but we were able to complete the stage ok. We are in fourth place, which is not too bad considering how tricky some of today’s stages have been, but we’ll see what more we can achieve in tomorrow’s final stages.”

Frenchman Bryan Bouffier (#20 Hyundai i20 WRC, co-driver Xavier Panseri) was acquitting himself well in his first WRC event with the Hyundai Shell World Rally Team as he maintained a top ten position for most of Saturday. Unfortunately, 28km into the final Panzerplatte stage, Bouffier made contact with one of the rally’s notorious Hinkelstein rocks, from which he was unable to continue. The team will now check his car to see if he can rejoin the rally on Sunday under Rally 2 regulations.

Bouffier said: “It’s been a tricky day for me, and I am disappointed we weren’t able to complete the final stage. This morning, we faced some difficult conditions, particularly in the Panzerplatte. We expected wetter conditions so opting for the softer tyre was perhaps not ideal. The car performed well all day and I was building confidence despite the slippery conditions at times. I was pleased to set the second best time in SS12, particularly as the rain came down at the start, but the big disappointment was in the final stage. Unfortunately, we made contact with one of the famous Hinkelstein rocks and we weren’t able to carry on. The team will have to determine later this evening if we are able to rejoin under Rally 2 tomorrow.”

The Hyundai Shell World Rally Team has put in one of its most proficient performances of its debut season so far in Germany with Neuville and Sordo both in contention for a strong result on Sunday. The Hyundai i20 WRC cars have performed competitively and recent technical improvements to the cars have delivered the expected results. The team’s focus now is on getting all cars to the end of the rally and hopefully to secure its third podium of 2014.

Team Principal Michel Nandan said: “There are a lot of very positives things to conclude from today’s seven stages. We have two cars in the top four and we are regularly setting top three stage times in tricky conditions, so that’s very encouraging. The developments we have made to the Hyundai i20 WRC recently, using some of our technical jokers, have worked well and the drivers have confirmed those improvements. Bryan was unlucky to hit one of the Hinkelsteins in the final stage, so we have to examine the car when it gets back to see if we can fix it in time for tomorrow. Thierry has had an excellent day and is in a thrilling battle for second place, while Dani has also had a good day, despite his big aquaplaning moment this afternoon. It’s not been easy with some slippery and wet conditions but the team can be pleased with what has been achieved today. We can take nothing for granted but we will keep focussed and use the podium as our motivation for Sunday’s four stages.”