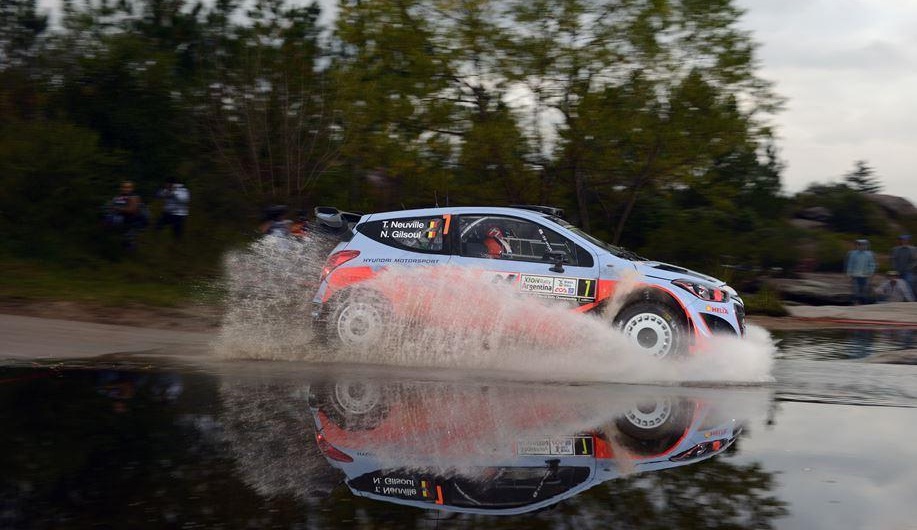 Hyundai Shell World Rally Team have endured a tough and disappointing Friday in Argentina with both Hyundai i20 WRC cars forced to retire mid-way through the day’s final stage.

May 9, 2014  Hyundai Shell World Rally Team have endured a harsh introduction to the demanding terrain of Rally Argentina, round five of the 2014 FIA World Rally Championship (WRC). Both Hyundai i20 WRC cars of Thierry Neuville and Dani Sordo were forced to stop midway through today’s final stage with mechanical issues after a day of learning the hard way for the young team.

Terrain conditions have been far worse than anticipated as a result of heavy rainfall around Córdoba in the past few months. The huge downpours have washed away a lot of the roads, resulting in huge potholes which have caused havoc with the drivers’ approach to these gruelling opening stages.

Today’s stages included a repeat loop of some of the toughest and longest stages on the WRC calendar. The opening stage, Santa Catalina-La Pampa (SS2/SS4), required drivers to navigate the treacherous roads before drivers moved on to the arduous 51.88km Ascochinga-Agua de Oro stage (SS3/SS5).

The team had already made a solid start in Thursday evening’s Super Special Stage securing the sixth and seventh fastest times but with 157.94km worth of stages to face throughout Friday.

Neuville (#7 Hyundai i20 WRC, co-driver Nicolas Gilsoul) had a positive, generally trouble-free start despite the tricky conditions making his way into a comfortable fourth position, on the cusp of a podium challenge.

The Belgian driver started the day in sixth place and he fought hard in tough conditions to make it through the loop without any specific issues on the car. Heading into the afternoon loop in fourth overall, the team made some adjustments to the #7 car to strengthen the underfloor protection. Another good run in SS4 cemented Neuville’s fourth place but in SS5 he lost power and was forced to stop mid-stage. At the time of this release Neuville’s Hyundai i20 WRC has yet to be recovered but, having examined the data available, the team believes the symptoms are similar to the problem Sordo faced in the morning loop.

Neuville said: “We had a clean start to this rally even with the really tough terrain that we had to tackle following the recent rain in the area. The roads were extremely challenging and we could see from others that it wasn’t easy to navigate. We decided to take it easy and it was the right approach since we were able to maintain a top four position heading into the lunchtime service. The afternoon loop started well with another fourth place but in SS5 I suddenly lost power and we were forced to stop to prevent further damage. It is a real shame to have had to stop in the final stage today but this was always going to be a real test for us and I hope that if we can restart tomorrow, we will be back on the pace.”

For Sordo (#8 Hyundai i20 WRC, co-driver Marc Martí), the rally started solidly with seventh in the Super Special stage on Thursday but from the very start of Friday, the Spaniard ran into technical trouble which hampered his efforts. In the opening kilometres of SS2, a connector between the turbocharger and intercooler pipe became loose, causing a leak and loss of air pressure to the turbo. He had to complete SS2 with reduced engine power and then stopped on the road section to SS3 in a bid to identify and resolve the issue. The problem proved too complex to cure despite his valiant efforts and he subsequently lost massive amount of time through the long 52km stage.

The team worked hard over lunchtime service to fix the problem and Sordo was right back on the pace in SS4 registering a top six time. It was in SS5 that misfortune returned with an exhaust manifold problem that halted his progress.

Sordo said: “It has been a very disappointing and frustrating day for me. The opening super special yesterday and the first part of this morning, I felt very comfortable in the car and confident. The conditions have been very demanding, some of the worst we have seen, but we were aiming to take a careful approach. First we had a problem with the intercooler pipe which meant that we had limited engine power. Obviously we lost a huge amount of time because of this in SS2. We tried to find and fix it on the road section but it wasn’t possible so we had to just finish the long SS3 in the same condition, putting us right down the field. The team did a good job over lunch and we got back into the top six times in SS4. Then, in SS5, we had an exhaust manifold problem that we could do nothing about, so we had to retire. The team has done a fantastic job to get our Hyundai i20 WRC back in shape overnight. The conditions have been hard and it has been the first time for the Hyundai i20 WRC car to compete here, so it’s not been easy but we still have two days of competition in front of us.”

Team Principal Michel Nandan commented: “Obviously, we are extremely disappointed that both Hyundai i20 WRC cars have been forced to retire this afternoon. We knew that this rally would be tough because we have not had the chance to test here so we did not expect things to run without incident. However, our involvement in WRC this year is precisely to learn as we compete. Today we have taken part on some of the roughest stages we have seen so it has been a stern test for our cars, as indeed it has for more experienced teams. Both Thierry and Dani have done a great job, persevering in face of tough tests and really showing their team spirit. It is with this united approach that we will learn the most from difficult and disappointing days like today. The team is doing a great job in fixing Dani’s car and I’m sure when Thierry’s Hyundai i20 WRC will be back in service they will manage to do the same.”