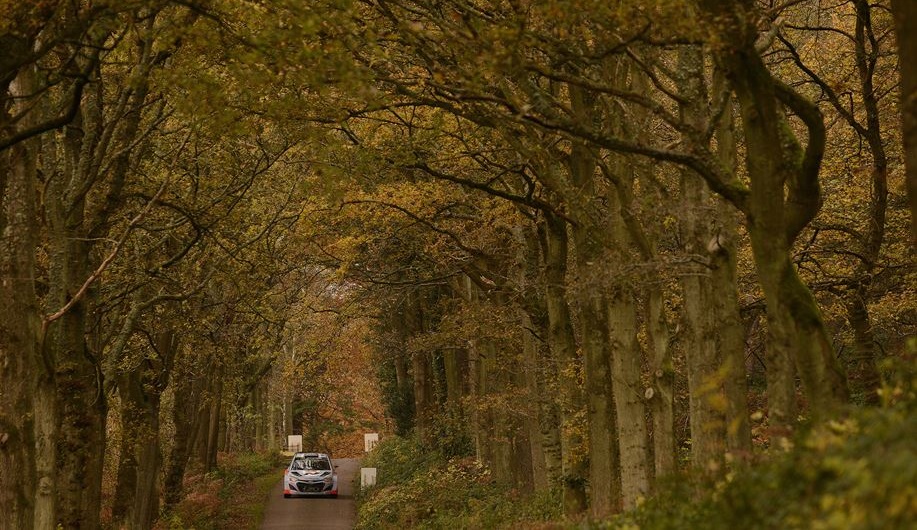 The Hyundai Shell World Rally Team has continued to make improvements on the second day of the challenging final round of the 2014 FIA World Rally Championship (WRC) in Wales.

November 15, 2014  The Hyundai Shell World Rally Team has completed a trouble-free day of competition in the slippery conditions of day two at Wales Rally GB, with all three cars improving their performances.

Nine stages today covered 113.74km over two loops on classic stages in North Wales including Clocaenog and Dyfnant, as well as a single run through the popular 2.06km Chirk Castle stage. The typically muddy conditions have offered highly variable grip levels, placing a premium on traction through the fast yet technical stages. With the low autumn sun during the morning and afternoon stages providing an additional challenge, these conditions have provided a real test for drivers and teams alike.

Thierry Neuville (#7 Hyundai i20 WRC, co-driver Nicolas Gilsoul) got the day off to a strong start by setting the second fastest time on the opening stage. With a determined drive he maintained his competitive times through the day and returned to the Service Park at Deeside in fifth overall, just 3.3 seconds away from fourth position, after a close battle with Mads Østberg.

Neuville said: “I was pushing hard all day although visibility was quite bad with the sun first thing this morning and in the afternoon. I missed my braking and lost some seconds a few times this morning after I put in my pace notes that we’d have a lot of grip but there wasn’t any! Otherwise we were pretty much on the pace. The car felt good on the smooth stages although we have to improve a few things including traction on the rough parts, so still plenty to work on. We pushed hard without taking too many risks in the dark this afternoon although I damaged the extra lights in SS16 which didn’t help on the final stage. Overall though we are happy with the day.”

Hayden Paddon (#20 Hyundai i20 WRC, co-driver John Kennard) also responded to improvements on his Hyundai i20 WRC and set a string of competitive stages times. Although he was less comfortable with the balance of the car through the fast sections today he shared the second fastest time through the interrupted first run through SS12 (Dyfnant). Finishing the day in eleventh overall, he has now reduced the gap to the top ten to just 5.7 seconds.

Paddon said: “The car has been better today after the changes we made last night and our times have improved. I’m much happier with the handling now, although I’m still concerned about some understeer through the faster sections. That gives us something to work with, but we continue to learn as a team in these difficult conditions. My aim is to keep pushing and improve as we go into the final day and to see if we can get into the top ten.”

Juho Hänninen (#8 Hyundai i20 WRC, co-driver Tomi Tuominen) started the day under Rally 2 regulations with a view to gathering as much experience as possible for the team in these difficult conditions. Hanninen has focussed on consistency throughout the day on the muddy and changeable stages.

Hänninen said: “It has been a much more productive day for us after the difficulties of yesterday; I have enjoyed these really nice but challenging stages. With the time we lost yesterday it was important to gather as much data as possible on day two as we learn about the car in the slippery conditions. We picked up a penalty after we had to stop on the road section to adjust the lights this afternoon but given our position it doesn’t make much difference. We will continue with the same approach tomorrow to learn as much as possible”.

In the final event of the debut season for the Hyundai Shell World Rally Team, the testing conditions of Wales Rally GB continue to provide an opportunity to develop the Hyundai i20 WRC. With the slippery roads placing a premium on traction and with the team improving the balance of the car to combat understeer, day two of the event has proved a valuable, if tough, learning opportunity.

Team Principal Michel Nandan said: “We have already learned a lot on this final event of the year. We made changes on all cars and all the drivers have reported better handling and have set improved stage times. With the slippery stages providing a real test of traction and handling balance we are pleased with the progress we are making on our first visit to Wales Rally GB. Thierry is not far from the podium and is setting competitive times. Hayden has also put in some good performances today. While we’ve had some issues, we are constantly improving as we continue to develop the car.”