Hyundai Shell World Rally Team have completed Friday with all three Hyundai i20 WRCs after a character building day. 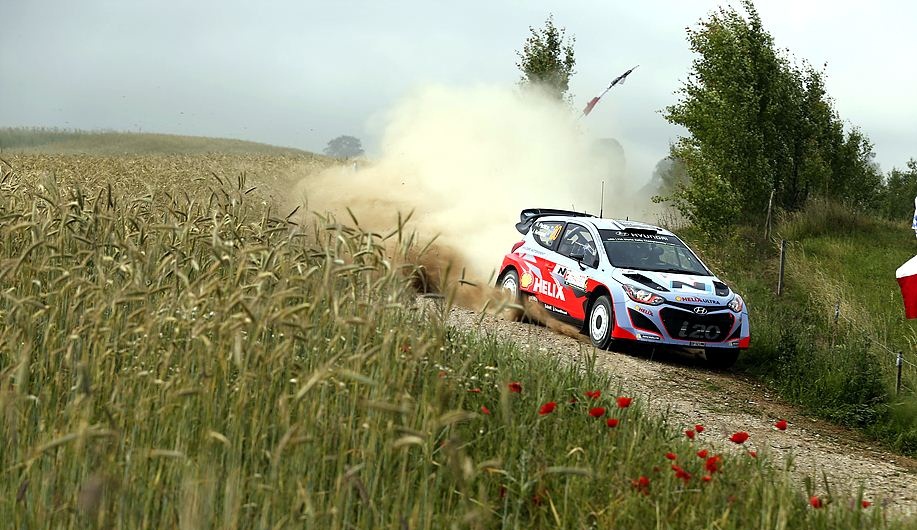 Hyundai Shell World Rally Team have completed Friday with all three Hyundai i20 WRCs after a character building day.

June 27, 2014  It has been a disrupted day for the Hyundai Shell World Rally Team on the second day of action in this weekend’s Rally Poland but the team has completed its objective of finishing the day with all three Hyundai i20 WRCs.

Today’s schedule was due to see seven competitive stages in total, two passes of the 12.89km Wieliczki stage and two repeated stages in Lithuania, the shortened 12.92km Kapciamietsis and the 17.97km Margionys stages  marking the first ever FIA World Rally Championship (WRC) stages in the country – and a run through the Mikolajki Super Special Stage.

Ultimately, the repeat loop of SS7 and SS8 were cancelled due to the conditions and to guarantee safety of the spectators, so the drivers returned to Poland to contest the repeat Wieliczki SS9 and the evening’s Super Special Stage SS10 at the Mikolajki Arena.

Neuville started the day positively but had a puncture, followed by a small spin at the end of SS6 which lost him a bit of time. In the early evening stage, SS9, the Belgian duo completed their run but immediately at the end of the stage had to resolve a locked rear brake that had manifested itself during their run, losing them valuable time. Some quick work from the crew enabled them to disconnect the rear handbrake and to continue onto SS10, despite having to run the final stage only with front brakes. They end the second day in tenth overall.

Neuville said: “It was another tough day for us, and actually quite a strange one because we did only about 60km of stage kilometres but several hundred kms of road section so it was difficult to get into a rhythm. I had a puncture at the end of the third stages this morning (SS6) which caused a spin and lost us some time. We only had one stage in the afternoon during which we had a problem with the rear brakes that were locking and getting very hot. Luckily we had some people to help at the end of the stage with fire extinguishers and we could continue. We had to complete the final stage with front brakes but that did not cost us so much time. Tomorrow’s stages are more technical so we hope for a better day so we can attack and try to make up some positions.”

Hänninen continued where he left off on Thursday with a series of solid runs in spite of the tricky conditions. The Finn has ended the day in the top six overall but has had to dig deep today to get the most out of himself and the Hyundai i20 WRC.

Hanninen said: “It was a good first stage this morning then we found some very difficult conditions in SS5 and SS6. It was incredibly frustrating to lose more than one second per kilometre because of the conditions. Our starting position is quite correct but even after ten cars the roads were tough. We really pushed and tried our hardest. The afternoon loop was cancelled so we drove back for SS9 which was relatively ok. To be honest, to have days like today and still be in the top six overall is not so bad. I hope we can have a stronger day tomorrow.”

The Kiwi crew of Paddon and Kennard were the surprise package of the morning opening stage as their stormed to second place in SS4 just 0.7s from taking a maiden stage win. It was an impressive performance in the #20 Hyundai i20 WRC but they, too, were to face the rough conditions in SS5 and 6. It was unfamiliar terrain for the pair but they did everything they needed to in order to get the car to the finish and they will start Saturday from just outside the top ten overall.

Paddon said: “It’s not been too bad today. I have been feeling comfortable in the car during the smooth stages and could get up to a good low-risk speed. I was pleased to set the second fastest time in this morning’s first stage considering we still had pace in hand. The following two stages could not have been more different. We struggled in the two rough stages (SS5 and SS6) and I lost confidence. The car has been going great, though, and feeling good; it’s just a case of getting more time and more confidence. Tomorrow’s stages are more like the ones we did well on today so I hope we can be competitive.”

Team Principal Michel Nandan: “It has been a very complex and challenging day for everyone today. We were able to continue with a trouble-free start to the day in SS4 but when the cars began the stages in Lithuania, it was clear that the conditions were bad and getting worse. It was, in my opinion, a sensible call to cancel the repeat loop; safety must always come first. We returned this evening for SS9 and the Super Special Stage. Unfortunately, Thierry had a problem with the rear brake during his SS9 but he worked very professionally with Nicolas to fix the issue and we will have a close look at that to see what happened. Other than that, the Hyundai i20 WRC cars ran to expectations, the drivers all performed well and we look forward to learning more and improving more tomorrow.”