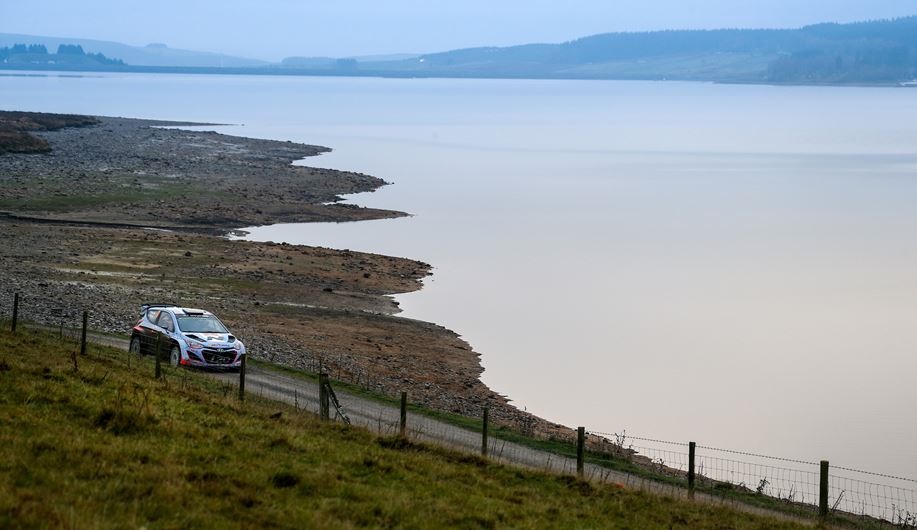 FIA World Rally Championship has been full of highlights, memories and firsts. The team has made a positive impact in its maiden season, bravely carrying out a comprehensive year of development with the Hyundai i20 WRC in the very public and extremely competitive WRC environment.

It was an ambitious target for the new team to make the start of Rallye Monte Carlo but this initial objective was achieved comfortably. The subsequent rallies would deliver above and beyond the team’s modest targets: a maiden podium in Mexico (Round 3) was followed in Portugal by the team’s first ever stage wins. Later in the season, at the team’s home rally in Germany (Round 10), it secured Hyundai’s first ever WRC victory, a 1-2 result and its first ever Power Stage points.

The WRC community has welcomed Hyundai Motorsport with open arms, which has helped the team to settle into its new surroundings quickly. The primary objective has remained unchanged: to finish each rally with all cars. However, as the numbers show, 2014 has been a season to remember for the team for so many more reasons.

Team Principal Michel Nandan commented: “We have been very pleased with the outcome of our debut season in the extremely competitive World Rally Championship. We were under no illusions how tough this season would be but we have learned a lot from this testing year  and accumulated some very good results along the way. From a blank sheet of paper, we have built a team of 120 dedicated professionals, developed a competitive Hyundai i20 WRC car and achieved a number of important milestones. We have taken our first stage wins, our maiden podium and a memorable 1-2 in Germany  a day I am sure none of us in the team will ever forget. To all of our supporters, partners and fans, thank you for joining us on this fantastic ride. I’d also like to thank each and every one of our team for their individual contributions to this season. The statistics and numbers tell a fantastic story, but it is the tireless work behind the scenes at Hyundai Motorsport which has made it all possible.”

The Road to Monte Carlo
 The Hyundai Shell World Rally Team began its debut season in the FIA World Rally Championship (WRC) in January 2014 with the shortest preparation time for any new manufacturer ever. There were just 394 days between the formation of Hyundai Motorsport GmbH on 19 December 2012 and the opening competitive day of Rallye Monte-Carlo on 16 January 2014.
 During the team’s preparation year in 2013, the brand new Hyundai i20 WRC completed 8,000km of testing across 16 sessions in order to prepare for Monte-Carlo.

In the Driving Seat
 12 people have buckled into the cockpit of the Hyundai i20 WRC in rallies this season: Thierry Neuville/Nicolas Gilsoul, Juho Hänninen/Tomi Tuominen, Dani Sordo/Marc Martí, Hayden Paddon/John Kennard, Bryan Bouffier/Xavier Panseri and Chris Atkinson/Stéphane Prévot.
 In addition, one rally legend has tasted the delights of the Hyundai i20 WRC  Marcus Grönholm drove the car at the Helsinki Battle in Finland.
 As lead crew in the #7 Hyundai i20 WRC, Belgians Neuville/Gilsoul started all 13 WRC events this season.
 Spaniards Sordo/Martí are the only crew to have competed with two differently numbered Hyundai i20 WRCs this year, driving the #20 car in Portugal and the #8 on five other occasions at Monte Carlo, Argentina, Germany, France and Spain.
 Hänninen/Tuominen have competed in six rallies with the #8 Hyundai i20 WRC, while Paddon/Kennard have also had six events in the #20 car.
 Atkinson/Prévot and Bouffier/Panseri have each taken part in two WRC events.
 Between them, Hyundai drivers amassed 193 Drivers’ Championship points and the two teams (Hyundai Shell World Rally Team and Hyundai Motorsport N) collected 215 in the Manufacturers’ Championship.

That Winning Feeling
 In its first season, Hyundai Shell World Rally Team became rally winners with a sensational 1-2 at the team’s home event, Rallye Deutschland  the first ever WRC win for Hyundai.
 Hyundai was just one of two manufacturers to win a WRC event in 2014, the other being Volkswagen.
 The result was even more impressive given the dramatic events in shakedown in which Neuville rolled his #7 Hyundai i20 WRC. The excellent work of the team’s mechanics, who pulled an 18 hour shift to repair the car, ensured the result was possible.

Stepping Up to the Podium
 In its debut season, the Hyundai Shell World Rally Team has taken to the podium in three rallies (Mexico, Poland and Germany) with four podiums finishes in total thanks to the team’s 1-2 in Rallye Deutschland.
 It was just 460 days from the very first Hyundai i20 WRC test on 21 May 2013 to the first victory on 24 August 2014.

On-Stage Success
 The team registered its first 1-2 in stage at Italy-Sardinia (SS2 Terranova Nord and SS3 Terranova Sud).
 Neuville, Sordo and Hänninen all led a rally at some point during the season.
 A total of 57 top three stage times were set by Hyundai Shell World Rally Team drivers in 2014.
 In terms of stage wins, the team’s most successful rally was Portugal (three wins in total).
 In terms of top three stage times, the team’s most successful rallies were Germany (12 top three times) and Poland (ten).

Belgian Power
 Thierry Neuville picked up the team’s first Power Stage points on the way to winning Rallye Deutschland.
 At the final round, Wales Rally GB, Neuville did it again. He scored a further two points by setting the second fastest stage time on the final stage of the season.

Swede Dreams
 In his first event for Hyundai Shell World Rally Team, Rally Sweden, Juho Hänninen was awarded the Colin’s Crest award for the longest jump during the Vargåsen stage  a mighty 36m.

All Around the World
 The team’s trucks added a staggering total of 25,897km to their odometers during the season moving between European rounds of the WRC.
 Overseas travel to Mexico, Argentina and Australia has seen the team total 100,699km of travel.
 Moving the team’s WRC equipment by sea freight has covered 56,700 nautical miles.
 The Hyundai Shell World Rally Team itself is made up of an average of 50 people travelling to each rally.
 A total of 4,160 individual nights were spent in hotels this season based on each member of the team.
 Five 12m containers were sent to overseas events containing approximately 50 tonnes of equipment (including recce cars, spare parts, tools and service area/hospitality equipment).
 The three rally cars were air freighted from Frankfurt airport around the world with 3,000kg of parts.

Growing Fanbase
 The team has seen a substantial rise in its online followers on social media platforms in 2014.
 Twitter rose from 6,400 followers at the start of January to 19,700 at the season end, an increase of 208%.
 Facebook likes rocketed from 16,300 in January to 272,000 in November, an increase of 1,569%.
 900 images from WRC events were uploaded to the team’s Facebook galleries.
 400 minutes of video footage uploaded to the team’s YouTube page from events, 90 videos in total with 1.2 million views to date.
 69 press releases were distributed to the world’s media totalling 71,500 words from the Monte Carlo preview to this very press release!

Home away from home with Hyundai
 The team turned heads from the opening round with first fully indoor, combined hospitality and service area in the WRC.
 450m² of space available to utilise over two floors (ground and terrace).
 It took 8-9 articulated trailers to transport equipment and materials to each European WRC event where the hospitality unit was used.
 Depending on the conditions on site, it took 16 people, four to six days to install the unit and up to three days to dismantle it.
 Inside, over 13,000 eggs, 200kg of pasta, 180 litres of energy drinks and 18,000 espressos were consumed by the team and guests over the duration of the season.
 This resulted in a lot of dishes! More than 21,000 plates were washed over the course of the season.

Multinational Alzenau Base
 The team has 120 employees working at its 8,200m² facility in Alzenau (near Frankfurt, Germany).
 The staff is composed of people from 23 different countries including Argentina, Austria, Australia, Belgium, Canada, Czech Republic, Holland, Finland, France, Germany, Hungary, Great Britain, Ireland, Italy, Malaysia, Mongolia, Poland, Portugal, Russia, South Korea, Spain, Switzerland, Taiwan  making Hyundai Motorsport one of the most truly international outfits in WRC.
 The facility is 50km from Hyundai Motor Europe‘s base in Offenbach and its Technical and Design Centre in Rüsselsheim.

And finally, who could forget…
 The important role that ONE bottle of Corona would have in helping Thierry Neuville secure the team’s first podium in Mexico!
 The efforts of the 10 WRC drivers who joined Hyundai Shell World Rally Team to celebrate Hyundai’s sponsorship of the FIFA World Cup during Rally Poland  an unforgettable penalty shoot-out that underlined why drivers should stick to driving!
 Our incredible trip to Korea in May.
 The four buckets of ice cold water needed to celebrate our 1-2 in Germany with a very special take on the ALS Ice Bucket Challenge. http://bit.ly/HyundaiIBC
 When Chris Atkinson gave Troy Bayliss an expletive-laden experience in the Hyundai i20 WRC after Rally Australia! http://bit.ly/TroyBayliss
 When Thierry Neuville gave Pole Position’s Rosanna Tennant an excitable drive in the #7 car which caused something of a stir on the internet! http://bit.ly/RosannaTennant