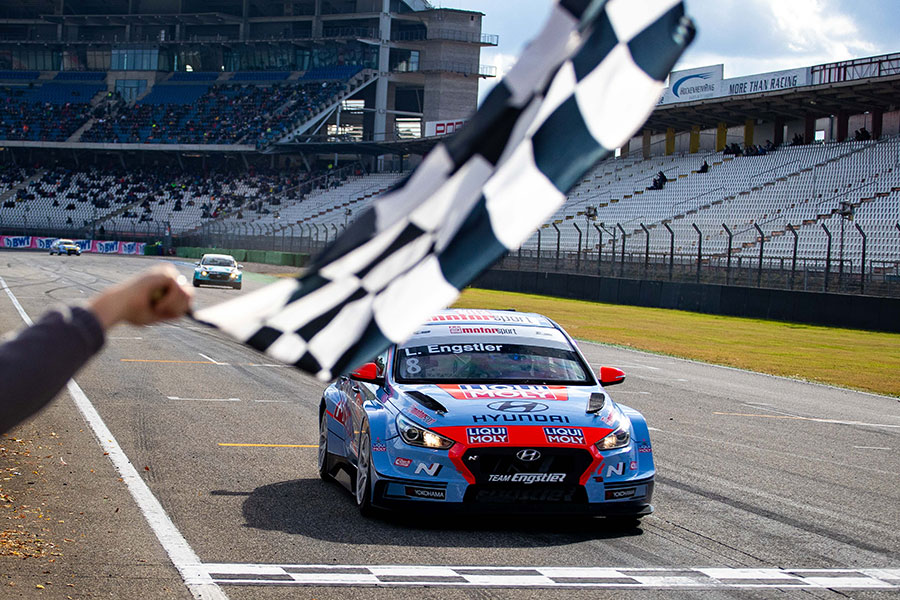 A highly successful TCR Germany season for Hyundai Team Engstler has seen the team sweep all four titles on offer with a dominant campaign.

Supported by Hyundai Deutschland, the team ran a quartet of our i30 N TCR cars and claimed its crowns with one round to spare. Luca Engstler won the main championship while his teammates Nico Gruber and Roland Hernter secured titles in the Junior Challenge and Trophy class – powering Hyundai Team Engstler to the teams’ championship victory.

“The achievement by Hyundai Team Engstler this year – winning all four TCR Germany titles with races to spare – cannot be overstated,” said Customer Racing Manager Andrew Johns. “In a competitive series they have dominated this year in every category with great individual performances by all their drivers.”

Impressive display
Hyundai Team Engstler closed out the season with double victory in the final round at the Nürburgring – the perfect cap on its strong year.

In his first year racing one of our cars, Hernter had such a hold on the Trophy class that he was able to clinch the crown in early October after two class victories at Sachsenring. At the following round, Gruber sealed the Junior Challenge honour with his own double class win in Hockenheim.

Luca also claimed his drivers’ championship title at the penultimate round of the season. A lights-to-flag victory in Race 1 gave him an almost unassailable lead, yet the German was forced off track in Race 2 and dropped to tenth. Showing great maturity, he quickly regained positions back to fourth to bring home the points he needed to secure the title.

Martin Andersen, making a promising debut on the TCR Germany grid, also helped Hyundai Team Engstler secure the teams’ honour – the third consecutive year it has been won by one of our i30 N TCR customers. After scoring his first podium in Lausitzring, he was a regular visitor to the top-three to bring himself into the battle for second in the points. After a victory in Race 1 and second place in Race 2 at the season finale, Andersen finished second overall in the standings.

The season also featured three privateer teams in our i30 N TCR cars, and each took strong results over the course of the season. In his first season of TCR competition, Jonas Karklys scored podiums in Lausitzring and Hockenheim before a victory in the final race of the season.

Patrick Sing, racing with his own team RaceSing, and Robin Jahr with ROJA Motorsport by ASL Lichtblau, scored best finishes of fourth and fifth respectively.