i30 N TCR returns to the Nordschleife 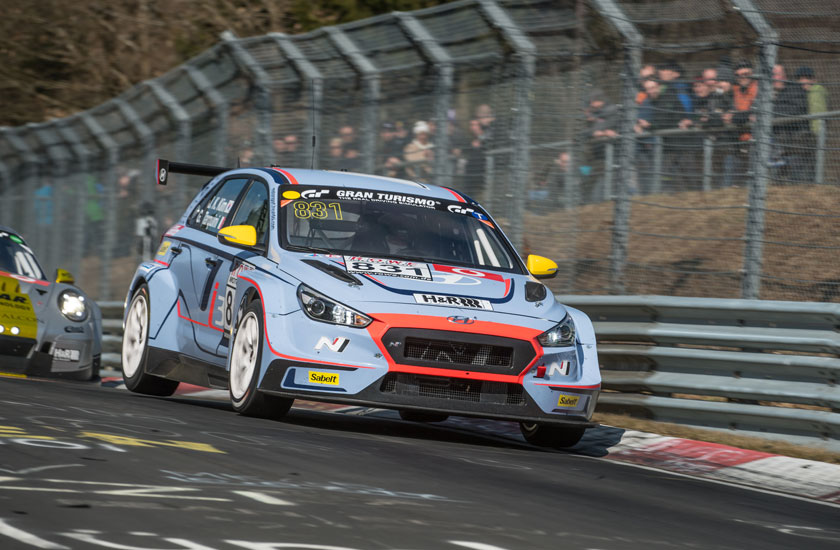 Following a sensational class podium on its debut at the Nordschleife in the VLN Championship last month, two four-man crews will drive i30N TCR cars in the qualifying race this weekend ahead of the 46th running of the legendary 24-hour race.

Attracting vast numbers of spectators and competitors who flock to the 25km “Green Hell” each year, the Nürburgring 24 Hours is a highlight of the motorsport calendar.

“The Nürburgring Nordschleife remains one of the toughest tests in motorsport. As the biggest event of the year on the track, the ADAC Nürburgring 24 Hours is the perfect place to show the i30 N TCR to the fans, and our potential customers,” commented our Customer Racing Deputy General Manager Andrea Adamo. “We were very happy with the performance of the i30 N TCR and the drivers at the first VLN race last month, so it was only natural that we look to the next challenge to prove the competitiveness of the car and our endurance racing package.”

The cars will be entered under the Hyundai N banner for both races, run by Hyundai Motorsport Customer Racing in conjunction with successful TCR squad Target Competition. The driver line-up brings extensive Nordschleife experience. 2012 class winners Nicola Larini and Manuel Lauck will be joined by Peter Terting and Andreas Gülden, a Nordschleife driving instructor and TCR class winner in the 2017 race in the first car.

In the second car, TCR Germany race winner Moritz Oestreich, another class winner at the race, will team up with talented Korean journalist and racer Byung Hui Kang, who will be competing in an i30 N TCR for this year’s TCR Korea season. Another journalist-driver, Guido Naumann, has been part of Hyundai Deutschland’s line-up for the event three times, while Korean driver Jae-Kyun Kim, who secured the VLN podium result alongside Gabriele Tarquini, completes the line-up. Tarquini will be at the Nürburgring in May but misses this race to focus on the FIA WTCR event held during the weekend.

“For both the Qualifying Race and the 24 Hours we have a strong driver line-up who have experience of both endurance racing and the Nordschleife,” said Andrea. “Together they and the team will be able to get the most from the car in what I am sure will be a very competitive class on an extremely demanding circuit.”