Fastest on track in the TCR International finale 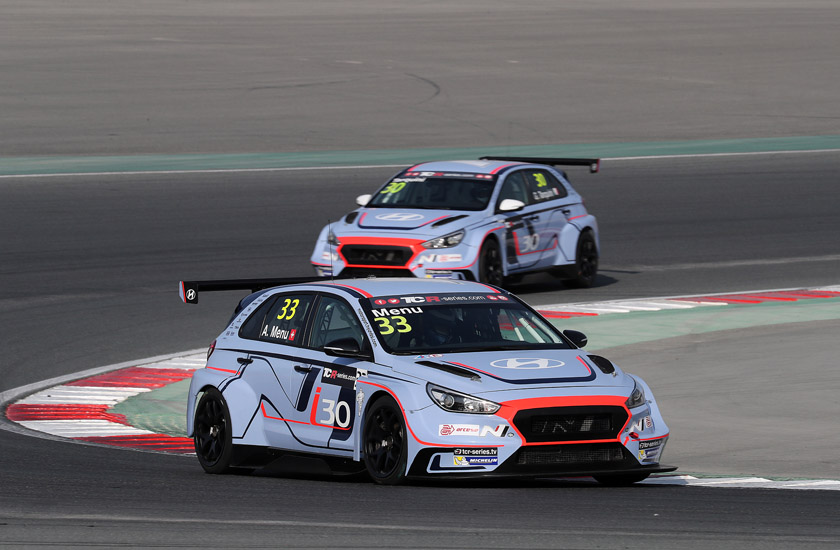 Fastest on track in the TCR International finale

On their return to the TCR International Series for the final races of the season Gabriele Tarquini and Alain Menu again proved the performance of the i30 N TCR amid a bruising contest at Dubai Autodrome.

At an event in which both drivers found themselves innocent parties in early race contact, the strength of the i30 N TCR, both physical and in terms of pace, shone through in their displays on track.

Both i30 N TCR started the weekend laden with the additional 40kg hastily handed to them, together with a 5% reduction in engine power, under the Balance of Performance (BoP) regulations immediately after the car’s debut race in China last month. The unprecedented penalty was further compounded by the 10kg extra success ballast given to Gabriele Tarquini following his individual performance at the previous round.

Furthermore, though both drivers proved to be on the pace of the frontrunners throughout the practice sessions, neither could qualify higher than 13th. This was due to the temporary homologation under which the i30 N TCR is competing this year, which leaves the drivers ineligible to progress to the final part of qualifying. Still, in the opening segment of the session both drivers held provisional pole, setting the second and fourth fastest times, Tarquini ahead of Menu.

A stewards’ decision following the session further demoted Tarquini to the back of the grid for the opening encounter. The lowly position proved little obstacle for the Italian and the i30 N TCR. In a race that included an interruption by the safety car Tarquini powered his way through the field to third position on the penultimate lap. Unfortunately, while chasing down second place he suffered a front-left puncture. This was caused by a combination of the debris left on track from earlier incidents and carrying the additional BoP weight around the circuit’s punishingly long right-hand corners.

Menu, meanwhile, was forced out early by damage following first lap contact, demoting him to the rear of the Race 2 grid. Tarquini started the season finale from 12th, due to the withdrawal of a driver ahead.

The Italian made a fantastic start, immediately climbing into the top ten and setting the scene for another great race result. Sadly, during the opening lap a driver behind made an error under braking, harpooning the right-rear of the i30 N TCR. The contact punted Tarquini into a spin, dealing heavy damage to both cars involved. While the other driver immediately retired, Tarquini was able to recover. He quickly made up the 12 second deficit to the back of the pack, blazing to the fastest lap in the process, and was able to climb to ninth position before the fall of the chequered flag.

Menu inherited Tarquini’s role in the fraught midfield battle after the opening laps. Having started from the back of the grid he was able to move up into the top ten and then, despite being the innocent party in some minor contact himself, to fifth position before the end of the race.

Gabriele Tarquini said: “That is racing. We knew it would be difficult with the additional weight on this circuit, but the i30 N TCR was very fast, and handled well all weekend. To be able to go from the back to fighting with the front two with a few laps to go is a very good performance, and we should have had a podium to show for it. However, I got a puncture, from a piece of debris perhaps. In the second race I got hit very hard, which damaged the rear corner, but I continued pushing back into the top ten and took the fastest lap. This really shows the performance, and the strength of the car, to still have the pace after such heavy contact. The i30 N TCR is a very strong all-round package.”

Alain Menu said: “It was a tough weekend for both me and Gabriele on track, but the performance of the i30 N TCR was exactly where we needed it. We were fast in practice and qualifying, but we had to start in the middle of the pack where there is always a chance of contact and unfortunately we got involved in other people’s incidents. Driving through the field in Race 2 was really fun. I could rely on the handling of the car through the corners and the power of the engine on the straight. These are the real strengths of the i30 N TCR which our customers will be able to enjoy when they compete at the front of any of the TCR championships next year.”

Hyundai Motorsport Customer Racing Manager Andrea Adamo said: “This weekend both Gabriele and Alain have again shown how competitive the i30 N TCR is in the strongest current TCR championship. We had to cope with the extra weight following the unprecedented, extreme BoP ruling from China, as well as some aggressive driving in the midfield. The car is clearly the fastest in the series at the moment, as demonstrated by Alain’s result from the back of the grid, as well as Gabriele’s fastest lap in Race 2 and his charge though the field. We have raced on three circuits now, and been at the front in all of them. The i30 N TCR will be at the front of any TCR series next season with our customers.”