Suberb win for i30 N TCR 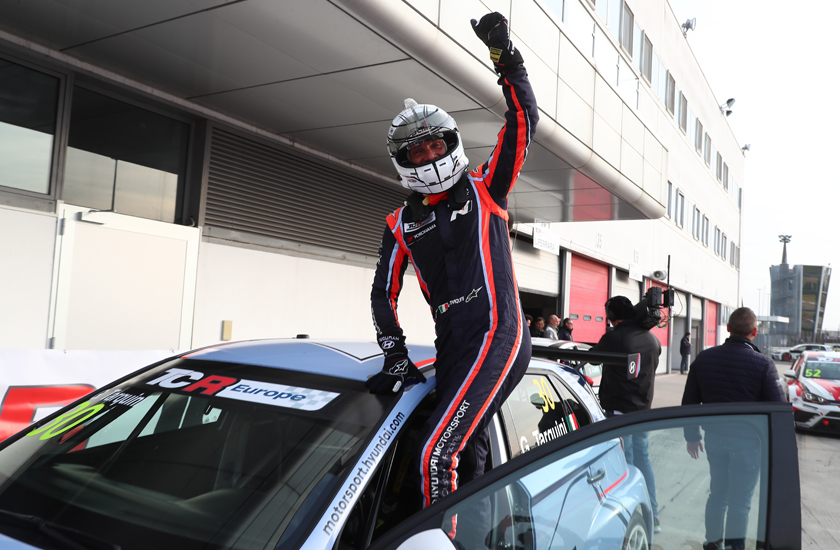 A sensational Race 2 victory, from tenth on the grid, provided a fitting climax to another strong weekend of the Hyundai i30 N TCR.

Driver Gabriele Tarquini also provided the first pole position for the project, proving the car’s position at the front of the current TCR category at the TCR Europe Trophy at Adria International Raceway.

Represented at the circuit by a single car, Hyundai Motorsport travelled to the event to continue to show the performance of the i30 N TCR around the world. Though entered under temporary homologation the car at the circuit was running to the same specification as is being offered to customer teams for the 2018 season.

Driver Gabriele Tarquini and the car, the first Hyundai Motorsport built chassis to be designed for circuit racing, were among the fastest combinations throughout the weekend. Making its debut on Yokohama tyres the i30 N TCR narrowly set the second fastest time in the opening practice session, the Italian was then able to head the final running before qualifying.

The pace was all the more remarkable, given the extreme Balance of Performance (BoP) forced upon the i30 N TCR. As it finished its maiden TCR International Series rounds earlier this month the car was carrying 40kg of ballast, with engine power and turbo boost restricted to 95% of full power. This proved to a be a serious disadvantage at the 2.7km Adria circuit, which demands heavy braking into, and strong acceleration out of, numerous slow corners where the extra weight is most noticeable.

Despite this considerable burden Tarquini was able to claim the first ever pole position for the i30 N TCR. The experienced Italian was fastest in both first and the decisive second part of qualifying. The only man capable of going below the 1:20 barrier in Q1, Tarquini took a further sixth tenths of a second off his own benchmark in Q2 to record a best lap of 1:19.341.

In the opening race Tarquini was in the middle of a fierce battle for the lead. Pushed back into second from the start, the acceleration off the line another area hampered by the BoP restrictions, Tarquini was able to match, and even eclipse the lap time of those around him, setting fastest lap in his pursuit of the lead. However, on a tight track where overtaking proved to be challenging he was unable to find the needed opportunity, finishing second to Josh Files who has already collected two TCR titles this season.

The second race promised a different challenge, with the top-10 from qualifying reversed to put Tarquini and the i30 N TCR on the fifth row of the grid. However, just as was the case in China he was able to charge through the field. At the centre of an action packed encounter, the performance of the i30 N TCR allowed Tarquini to progress up the field, at one point passing three cars in a single move.

Taking the lead just after the half-way point of the 25-minute race Tarquini went on to claim an incredible victory to continue the i30 N TCR’s superb record on the track.

Gabriele Tarquini said: “This was a very tough weekend, but it makes the result more impressive. It was our first time running the i30 N TCR on these tyres, so we had to work a little to find a good set-up for the car, especially with the extra weight. I could really feel the effect of the weight after only a few laps under braking for the hairpins around the circuit. To be able to take pole position, a second and then a victory from 10th on the grid proves what a special package the i30 N TCR is. The second race was very fun, and it was the best the car felt all weekend. We now have one more event with the car to put in another very strong performance to show what this car can do before we start to hand over completed chassis to customers.”

Hyundai Motorsport Customer Racing Manager Andrea Adamo said: “This is another sensational weekend for the i30 N TCR. There is no doubt about the performance on the track, even with the extreme and rushed, perhaps too rushed, Balance of Performance we are running with. Our customers can clearly see how competitive the i30 N TCR is in the TCR category, with the car at Adria running very close to the final specification we are offering to customers. We have now won races on both competitive outings with the package, but on two very different styles of track, which proves that customers will be able to compete at the front of any TCR series where they choose to compete with the i30 N TCR.”

Gabriele Tarquini will return to the wheel of the i30 N TCR at the Dubai Autodrome, with Swiss driver Alain Menu in a second car for the final two races of the TCR International Series.