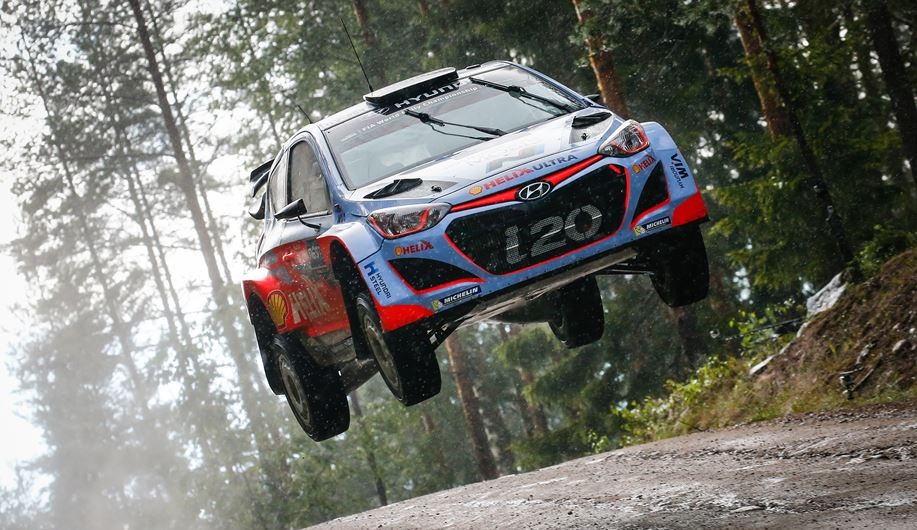 August 1, 2015  Our team continued to battle today as Rally Finland entered its Saturday stages, with new challenges in this eighth round of the 2015 WRC calendar following Hayden Paddon’s unfortunate retirement from the rally yesterday.

In the two remaining Hyundai i20 WRC cars, Thierry Neuville and Dani Sordo set out to build their confidence on the second full day of special stages and to consolidate their top six positions in the overall classification.

The four stages of the morning loop went well with Thierry and Dani both reporting better grip and improved feeling in their cars. While their times were not as competitive as they hoped, the two drivers had a close inter-team battle for fifth place.

Thierry picked up where he left off on Friday with a determined effort today. He put his Thursday shakedown crash behind him and gained momentum during the morning. Despite some engine issues in the afternoon, he was able to maintain his pace and finish the day in fourth place overall.

“To be in fourth at the end of today is really good,” said the Belgian, “and quite a nice surprise really. We started the morning with more confidence than yesterday, and I enjoyed the stages a lot more, even if we were still struggling for traction. We were in a close fight for fifth with Dani so my aim was to defend that position. In the afternoon, we had a problem with the engine and lost one of the cylinders, We worked quite a lot on the car and it was much better after the team gave us some good advice, so we could keep our pace to the end of the day. We have inherited fourth place today so now our target is for a trouble-free end to the rally.”

Dani also enjoyed a solid morning, getting to grips with the high-speed Finnish stages. However, drama struck in SS15, Mökkiperä, when an error put the car in a ditch. Although there wasn’t much damage it took the crew and spectators five minutes to get the car back on the road.

“We had a better start to the morning,” commented the Spaniard, “and could get a good feeling from the car in the stages. It was not perfect but I enjoyed it a lot more and we were in a close battle for fifth place with Thierry. The afternoon was not so good because I made a mistake in SS15, going offline and getting stuck in a ditch. We were able to get the car back on the road but we lost a lot of time in the process, which meant we were out of the fight. I didn’t take any risks in the remaining stages but we will try to push a bit more in the final stages tomorrow to learn more about the car in these conditions.”

It has not been an easy weekend for our team as we continue to master the complex and demanding Rally Finland stages. Our team will spend the evening analysing today’s stages and using the final stages tomorrow to try and secure a two-car finish and fourth place.

“We have had another challenging day but there were some signs of improvement,” said Team Principal Michel Nandan. “The morning loop was encouraging as both Thierry and Dani reported more confidence compared to yesterday. We had some issues in the afternoon. Firstly, Dani went off into a ditch and, although there was not much damage, he lost five minutes getting the car out. Thankfully he was able to continue. Thierry was able to keep his pace despite a problem with his engine, and it has been good to see him move into fourth place overall. We will see what tomorrow brings but our aim is to get a clean finish and pick up as many manufacturer points as we can.”

Sunday will include the Myhinpää stage run twice, once as the Power Stage. Our team will do everything possible to get as many points as possible, which will be valuable in our chase for second place in the Manufacturers’ Championship.