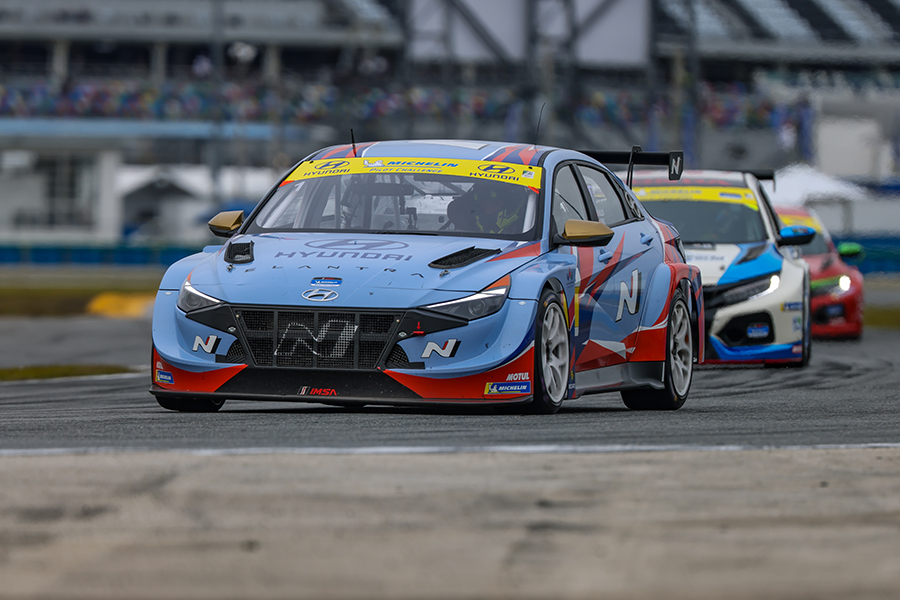 A third-place finish for the pair completed a strong race comeback with the podium result typical of their consistency throughout the title-winning season.

As one of the first teams to receive an i30 N TCR back in 2018, the Bryan Herta Autosport squad has become one of our most successful customer teams. Although this most recent result marks the first championship victory for our Elantra N TCR in the USA, it extends an excellent history for the team, which is supported by Hyundai Motor America.

For Taylor and Michael, their second championship win together marks the team’s third consecutive sweep of the drivers’, teams’, and manufacturers’ titles in the series.
“The IMSA Michelin Pilot Challenge is one of the major TCR series where Hyundai Motorsport Customer Racing-built cars compete,” said our Deputy Team Director Julien. “Bryan Herta Autosport’s success is very well deserved in a unique series within the TCR world and something everyone can be very proud of.”

For 2022, Bryan Herta Autosport expanded to a stable of six Elantra N TCR, their biggest commitment to the championship to date, and immediately started strongly at the series’ showpiece season opener at Daytona International Speedway. After five podiums, Taylor and Michael broke through to win at the penultimate round of the season at Virginia International Raceway, leading a team 1-2 – one of three during the year.

A podium sweep for the Elantra N TCR at Canadian Tire Motorsport Park saw the all-Canadian Robert Wickens and Mark Wilkins line-up take their second win. Their victories were among the most emotional high points of an already highly charged campaign, for Robert especially. In a car specially adapted with hand controls, the season marked his return to racing following a serious IndyCar crash in 2018. The Watkins Glen success became his first race win since the incident.
Sweeping the standings

Across the campaign all seven full-season Hyundai Motorsport customer entries scored at least one podium finish to help secure our third consecutive manufacturers’ title in the series as part of a sweep of all three TCR class titles. Hyundai teams filled four of the first six places in the teams’ standings.
“From the start of the year, the teams have been on the pace,” added Julien. “This amazing consistency has been one of the keys to the season. The clean sweep of titles clearly shows the talent of all the drivers involved, and the excellent qualities of the Elantra N TCR and Veloster N TCR.”