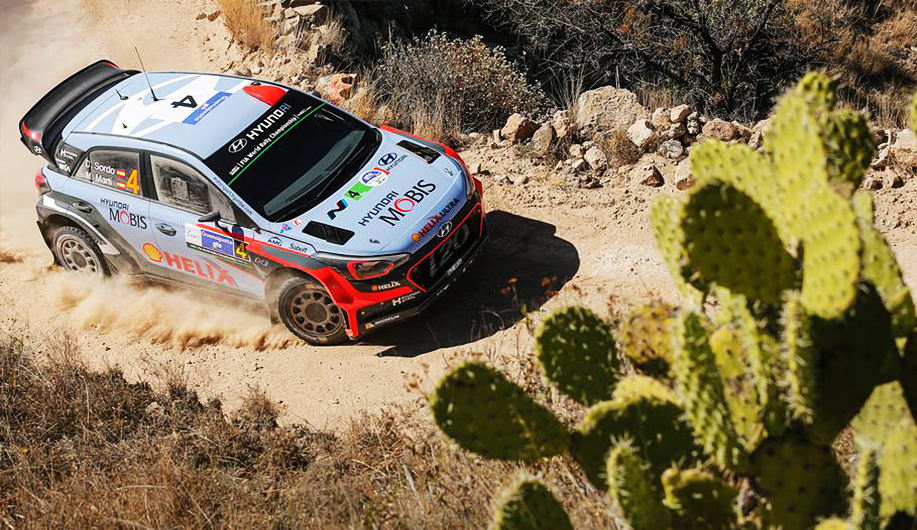 March 4, 2016  Our team has endured a testing but ultimately positive Friday at Rally Mexico, third round of the 2016 FIA WRC.

The start on Thursday night went smoothly with all three drivers in the top six, and Thierry showing his intent with a stage win in SS1!

Friday was more challenging but Dani still made an early run for the podium, finishing the day in third place. Hayden also ended in the top five after building his pace as the day went on. Thierry’s challenge melted away on the first run of the infamous El Chocolate stage with damaged suspension.

“We can be very happy to hold a provisional podium position after this first full day,” said the Spaniard. “It wasn’t the most straightforward day and there is still a long way to go, but it’s not been a bad start. We really enjoyed the ceremonial start and first stages yesterday in front of an impressive crowd but today was all about the long El Chocolate stage. We had a decent opening stage, even if we lost a bit of time, but were carrying two spare soft tyres in the boot, which ultimately we didn’t need. That caused the rear of the car to move around a bit too much. Still, it wasn’t too bad. The repeat stage was very slippery and I found it very difficult but we made some improvements in the repeat of Las Minas. We have a bit of a buffer to Mikkelsen behind us but we have two very demanding days to rally so it’s too early to get excited. I’m looking forward to another long day tomorrow.”

Hayden, representing Hyundai Mobis World Rally Team at this event, had a steady start but built his speed in the afternoon to hold his promising top-five spot. Boosted by his recent podium in Sweden, he is looking to maintain a strong finish in Mexico.

“We didn’t have the best of mornings, making the wrong tyre choice which wasn’t the cleverest decision on my part,” admitted the Kiwi. “We expected conditions to be best suited to the hard compound but it didn’t turn out as we thought. We had a very slight contact with a wall in SS5 (Las Minas), which usually you would get away with but we bent the suspension. We made it through and thankfully the afternoon went better. The grip was improved and the tyre choice was easier. I’m trying to do a sensible rally and our aim is to keep hold of this top-five position, which I’d see as a very good result here this weekend. There’s still a lot of tough stages still to run, and another long day ahead of us tomorrow.”

Thierry has suffered since his Thursday night stage win and had to retire today 13Km from the end of SS4 after spinning out and damaging his car’s suspension. He looks to regain positions tomorrow after rejoining under Rally 2 regulations.

“I’m very disappointed,” said the Belgian. “It was certainly not the day we wanted or expected after the positive way we started yesterday. We made a good tyre choice and were setting encouraging split times in El Chocolate (SS4), which makes it even more frustrating. We lost the car over a crest and spun, causing damage to the front-left suspension  game over for the day. Thursday evening’s opening stages were positive and helped us build confidence, something we will now look to rebuild tomorrow. It’s a long, tough rally and anything can happen  as we have seen today  so we’ll keep working hard to see what we can salvage despite the time penalties we will incur for restarting under Rally 2.”

Rally Mexico is a very special event for us  the site of our first WRC podium back in 2014! Fast forward two years and we are aiming for a third podium in three events following back-to-back podiums in Monte-Carlo and Sweden  our strongest start to a WRC season so far.

“It has been a typically unpredictable start to Rally Mexico, an event we love and fear in equal measure,”commented Team Principal Michel Nandan. “The stages we face here represent a completely different challenge to those in Monte and Sweden so it’s a step into new terrain for our New Generation i20 WRC. All three drivers had a trouble-free start on Thursday evening with Thierry taking a stage win in front of the many fans that have turned out to support WRC once again in Mexico. Today has seen the famous and challenging El Chocolate, which unfortunately caught Thierry out. He damaged the suspension on his car after a spin but we are pleased to have him rejoin the rally tomorrow. Dani has had a strong start and is firmly in a podium position. We can’t get carried away because we have some really tough tests ahead of us on Saturday  as well as the monster 80km stage on Sunday, which can transform the event. Hayden, too, is doing well inside the top-five, a position he will aim to hold. So far it’s been a bit mixed but we have plenty of positives and I hope we’ll be able to see even more performance from the car and drivers tomorrow.”

Saturday will feature nine stages including loops of Ibarrilla, Otates and El Brinco, as well as the live Agua Zarca stage after lunch. The afternoon will see second runs of Otates and El Brinco before two Super Special Stages and a final Street Stage.