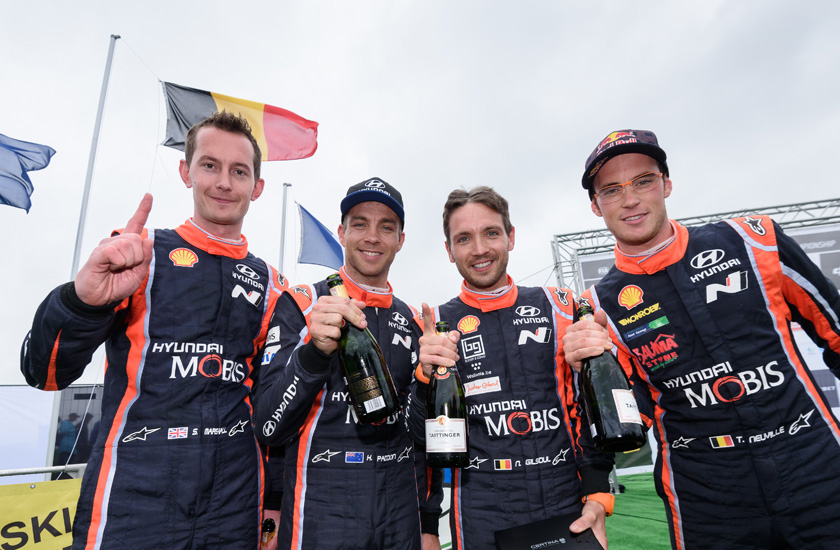 We have taken our third victory of the 2017 WRC season in style with a fantastic 1-2 in Rally Poland.

Thierry and Nicolas took the win ahead of Hayden and Seb, who picked up their first podium of the season. It represents our first 1-2 result since Rallye Deutschland back in 2014, and also our seventh double podium.

“What a great result for the whole team,” said a happy Thierry at the end of the Power Stage. “I am delighted for everyone in the team.”

Our Team Principal Michel was equally pleased. “An important result for us, especially in terms of the championship” he said. “More than that, it shows what we can achieve when we are all at the top of our game.”

Our Belgians had been involved in an exciting duel with Ott Tanak for much of the rally, which saw the lead change multiple times. The challenge ended after SS21 (Paprotki) when the Estonian was unfortunately forced to retire.

“It was a closely-fought rally,” added Thierry. “Our goal was to outscore Séb (Ogier), which we did, and we have closed the gap for the second rally in a row.”

Our Belgians have continued their unbroken streak of podium results, which dates back to Rally Mexico in March. By finishing fifth in the final run through Paprotki, they also extended their record of scoring Power Stage points in every rally this season.

In the Drivers’ Championship, there are now just 11 points separating Thierry in second and leader Ogier, which sets up an exciting prospect in the final five events.

For Hayden, second place is his first top-three finish since Poland twelve months ago and his best result since he won in Argentina last season. It also represents Seb’s debut WRC podium!

“I can’t tell you how relieved I am,” said Hayden. “It feels like a win after the season we have had. Thanks to Seb for a job well done, and congratulations to him for his first WRC podium.”

Dani and Marc finished strongly in fourth place to give us our best-ever combined team result in WRC.

“It has been a difficult weekend with some tricky conditions, but overall it has been positive,” commented Dani. “I am really pleased for the team, as we have collected a lot of points for the championship.”

Catch me if you can

From a 40-point gap, we are now just 22 behind M-Sport in the Manufacturers’ Championship. The competition remains intense so we have to keep focused at each event in our efforts to catch them.

“This 1-2 result is for everyone in the team and our supporters,” concluded Michel. “WRC is in great health with a high level of competition. We are honoured to be playing our part.”

The fast and furious stages continue with the high-speed Rally Finland next up on the 2017 calendar. The ninth round of the championship will take place from 27-30 July.

2017 FIA World Rally Championship for Drivers’ Standings
After round 8

2017 FIA World Rally Championship for Manufacturers’ Standings
After round 8