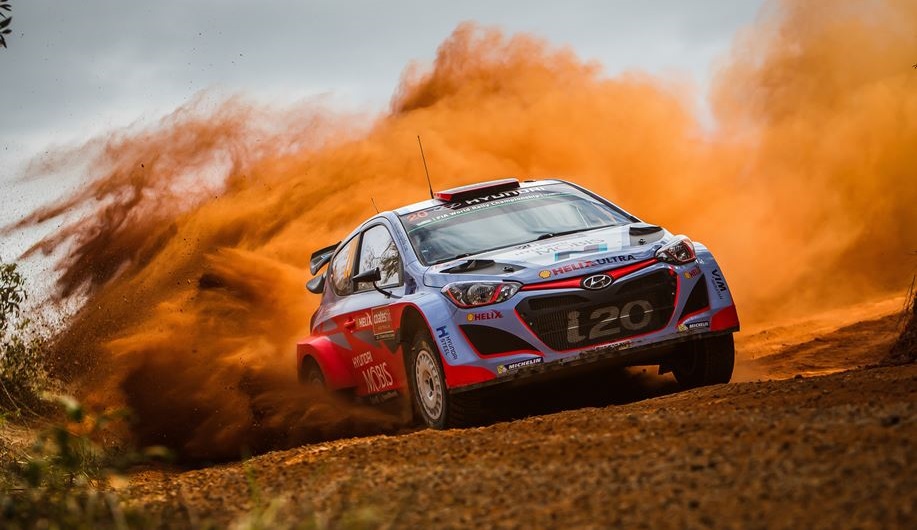 September 11, 2015 – A strong performance sees all three Hyundai Motorsport cars finish the day’s stages within the top-seven overall at Rally Australia, which is the tenth event of this year’s 13-event WRC Championship.

After winning the first three stages in the morning, which were new to the event, Dani Sordo sits in fifth position at the end of the day. Hayden Paddon and Thierry Neuville also claimed top-three stage times in the morning loop. The afternoon stages were generally trouble-free, with all three Hyundai i20 WRCs ready to continue pushing tomorrow.

Dani’s first time at this event has started very positively, and he took advantage of the level playing field offered by the new stages in today’s loops to set some strong times.

“I am very pleased with how this first day has gone,” said the Spaniard. “This is my first time on this version of Rally Australia but many of the stages were new for everybody. The car has been perfect for most of the day and the team has been working well. The only issue was at the end of the morning in stage 4, when I experienced a downshift problem and stalled at a hairpin. The afternoon was trickier  there was a lot of dust in the final stage so we couldn’t take many risks. Overall, to be in the top-five is a good position heading into Saturday.”

Hayden has also enjoyed a competitive start to Rally Australia, finishing the morning loop in the top-three and finishing the day in sixth position overall.

“It’s been a day of two halves really,” admitted the young Kiwi. “Our morning went well and we had a little advantage from those road-sweeping ahead of us. However, because of that the roads were wearing the tyres a lot more, so we had to drive quite carefully. In the afternoon, the balance of the car felt less consistent, almost as if we had a puncture. We’ll look at that this evening because something felt strange. The stages today have been new so everyone’s learning. Tomorrow, we’re back on familiar stages, so we’ll be looking to push a bit more.”

Thierry’s performance completed our promising start to Rally Australia. He showed a good pace to claim a top-three stage time in the morning’s Northbank 1 stage and finish the day in seventh overall.

“I have been quite pleased with my driving,” said the Belgian. “We had a strong morning loop, though struggled a bit with car settings on the long SS4 stage. We made changes over lunchtime service, and to our pace notes, and I felt better in the afternoon. There was a lot of dust on the final stage and the visibility was just a couple of metres in some places. We made it through, so now our focus has to be on making more progress tomorrow. Not a bad first day, really.”

Our second trip ‘down under’ has gone to plan so far, with all three cars in the mix after 125km of rallying across eight stages. We have three more stage wins, led for most of the morning, and topped the overall classification for the fifth event this season!

“There are some positives to take from this first day of rallying in Australia,” said Team Principal Michel Nandan. “Many of the stages today are new to the event so everyone has had to get acquainted with them. This has made for an interesting day and it was very pleasing to see Dani take three stage wins this morning. We started the day in a spirited manner and, though we benefited from road position, the performance of the Hyundai i20 WRC cars has been good all day. It’s not all been perfect but we have shown their potential and will now analyse everything from today to see how we can improve for tomorrow. There is a good atmosphere in the team so I’m looking forward to seeing what we can achieve in the remaining two days.”