One stage cancelled due to heavy rain, with Kevin in second after two live stages on Friday. 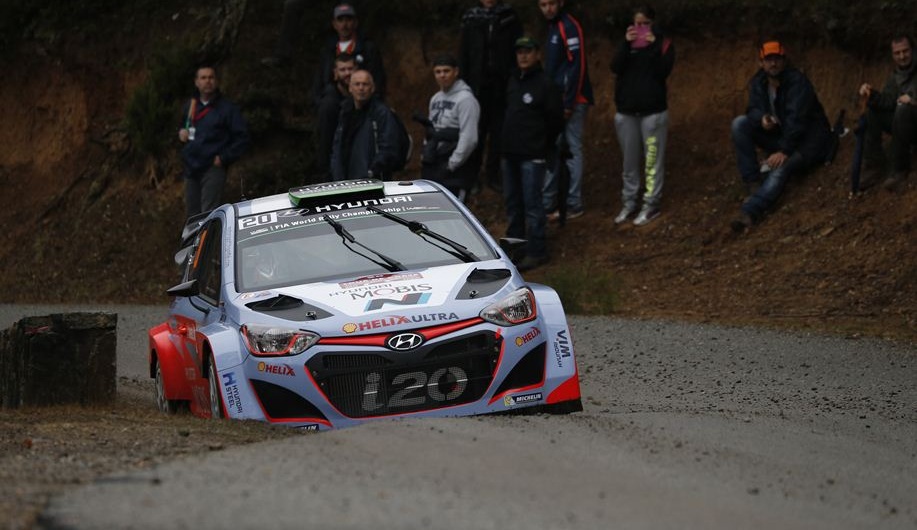 One stage cancelled due to heavy rain, with Kevin in second after two live stages on Friday.

October 2, 2015  The WRC’s return to Corsica has been affected with heavy rain throughout the first day, causing issues for the organisers and teams. The second of today’s three stages was cancelled due to the weather.

The rain made the tarmac roads particularly testing on the remaining two stages causing issues for a number of drivers. Our fourth driver Kevin ending the day fastest of our team with second place overall. Dani and Hayden both completed the two stages, ending the day in 11th and 14th respectively. Thierry clipped a bridge 1.2km into the first stage, damaging his suspension and had to retire.

It is Kevin’s third rally of the year with our team. He finished day one just 18.7s off the rally lead, taking advantage of his experience of the island after coming third at the ERC event here in 2014.

“We took it steady on today’s stages,” said the young Dutchman. “We didn’t really know what to expect on the opening stage and as the 15th car on the road the conditions were quite dirty. There were a few parts where the pace notes worked really well and my performance was good. We made some changes to the car at service and things went well in the afternoon. I knew I was on good pace in the opening 10km but it wasn’t so clear in the latter part, so I had to be careful. This is our second tarmac rally and I’m just focused on trusting the pace notes fully. Considering the circumstances today, I am very happy with how it is working so far. We’ll continue to work in this way tomorrow and see what more improvements we can make.”

Hayden is less experienced on the tarmac and was careful today in the rain. He did well to finish eighth in the second stage and sits in tenth overall.

“It’s been a very demanding day for our first day in Corsica,” said the Kiwi. “It was very slippery this morning and I don’t have much experience driving in conditions like that, so I didn’t have any confidence. I just adapted my driving accordingly to get the car to the end of the stage. That stage gave us a base on which to build. The afternoon stage, after the cancellation of SS2, started well but after one kilometre we hit a rock and damaged a wheel. We had a bad vibration after that and were very lucky later on when we were close to a sheer drop. It was a heart in the mouth moment, so I was just pleased to make it to the end of the day. We have more to learn here and, conditions prevailing, we will look to make improvements tomorrow.”

Dani also has experience rallying at Corsica and it showed today. He was competitive but a broken rim early in SS3 lost him two minutes. His times, apart from that, have equalled the rally leader.

“It was a day of mixed results for me,” said the Spaniard, “but overall there are a lot of positives. The first stage was not too bad at all. The conditions were a bit damp and a lot of corners were muddy and slippery in places. We had some understeer towards the end of the stage but overall it was a good start. In the afternoon, all of our time loss in SS3 was caused in the first split when we went tight into a corner and caught a rock on the inside, which broke the rim. We lost two minutes as a result, a very frustrating situation because I was on good pace after that. We’ll regroup and see what conditions are like tomorrow. For sure, we’ll try to reclaim some positions.”

Thierry was unlucky today and made contact with a bridge just 1.2km into the opening stage. Unable to repair it, he will re-join the rally tomorrow and resume his hunt for points.

“I started out at a high rhythm,” commented the Belgian, “and tried to push ecause I like the slippery conditions. Unfortunately, I was a bit early turning into a very tight left-hander early on in the stage. The speed was OK but because I was a bit early I had to open and turn again. I used the handbrake and I slightly hit a wall, damaging the rear suspension. Two bolts were broken and we could not replace them so it was an early retirement for us. We’ll be back tomorrow but obviously we’ve incurred a big time penalty. Anything can happen here as we have seen throughout the two stages. Tomorrow will be a new start to the rally for us and our objective will be to catch up and, ultimately, look for some points in the manufacturers.”

“The heavy rain has made it a complicated day for everyone,” said Team Principal Michel Nandan. “We’ve seen how easy it is to run into trouble. In that regard, it is very pleasing to see Kevin running second at the end of a tough opening day, in which we’ve had a cancelled stage and slippery, demanding conditions in the other two stages. All crews have faced difficulties but Thierry, unfortunately, was forced to stop after picking up rear suspension damage after hitting a bridge early in the first stage. Dani and Hayden made it through but a puncture for Dani and a close call for Hayden prevented them from being further up the classification. Still, it’s early days and we have three very long stages tomorrow, which will require a steady approach if these conditions continue. It’s a valuable learning experience for Hyundai Motorsport in our first Tour de Corse.”

Weather conditions are sure to affect tomorrow’s itinerary, which has three long stages including a repeat of today’s cancelled Stage Two. We will keep pushing, ready to seize any opportunity.