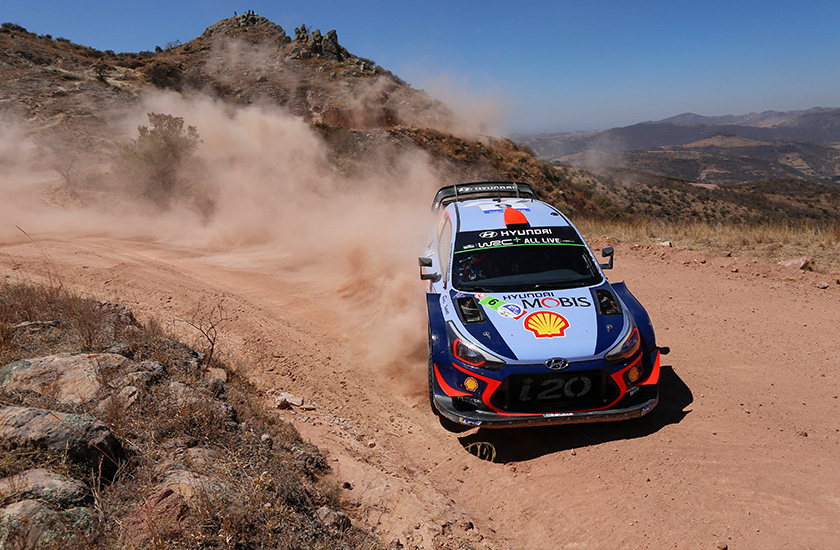 In their first appearance since the season opener in Monte-Carlo, Dani and Carlos wasted no time getting back up to speed with a positive opening day in Mexico.

The third round of the championship – and the first gravel event of 2018 – saw our Spaniards regularly among the pacesetters. Taking two stage wins in the morning loop, they moved into the lead of the rally, and held a 7.2-second advantage at the end of Friday.

“I have been happy with our pace and rhythm,” said Dani. “To be leading the rally at the end of the opening day is a great feeling but we know it is very close and we will have a fight on our hands.”

Our championship leader Thierry had the task of being first on the running order. Among Friday’s itinerary highlights were two attempts of the rally’s longest stage, El Chocolate (31.44km).

Along with co-driver Nicolas, our Belgian had already taken a stage win on Thursday evening’s street stage in Guanajuato. However, the duo lost time on Friday, due to some technical issues, ending the day in seventh overall.

“Not the most positive day for us. Unfortunately, we had an unforeseen over-consumption of fuel in SS5, which caused a loss of fuel pressure,” explained Thierry. “The afternoon didn’t really improve and we struggled again in SS8 (Ortega 2) with some power steering trouble.”

For our Norwegians Andreas and Anders, holding sixth on the classification, it was a generally trouble free day but with room for improvement.

“We tried to push as hard as we could in the circumstances,” said Andreas. “There were a few mistakes here and there but generally it’s been a solid first day. We’re involved in a close battle for the top-five, which gives us something to build on.”

“A day of mixed fortunes for our crews,” summarised our Team Principal Michel. “Road position will again be a key factor on Saturday with our crews both benefitting and being disadvantaged in equal measure. That’s just part of the rallying game.”

Nine more stages will be contested on Saturday, covering a total stage distance of 140.35km, and including the famous El Brinco jump.