Lessons to learn on penultimate day of Rally Portugal

Dani fights for fourth after Thierry and Kevin forced out on Saturdays morning loop. 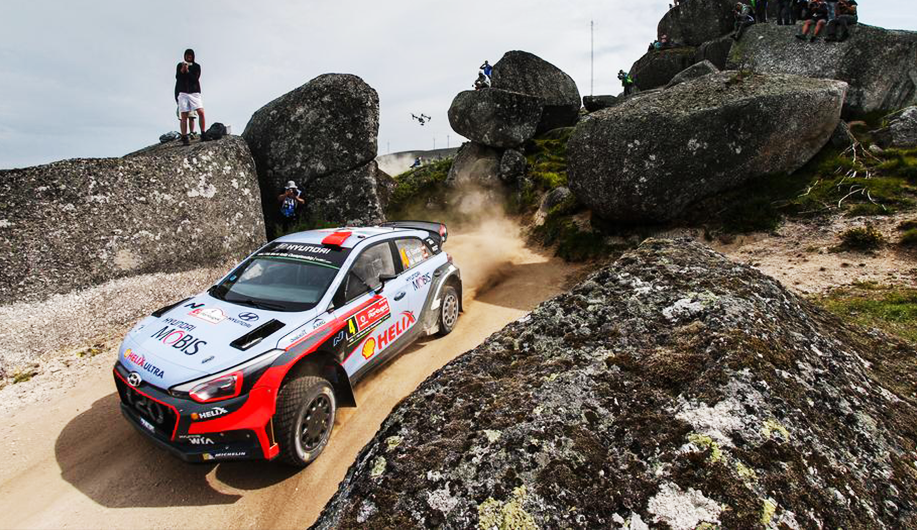 Dani fights for fourth after Thierry and Kevin forced out on Saturday’s morning loop.

May 21, 2016  Our Spanish crew of Dani and Marc have fought hard on the penultimate day of Rally Portugal, holding fourth place after a tough day for our team.

Dani wasn’t able to replicate his competitive pace from Friday, as Saturday’s slippery stages did not suit the characteristics of the New Generation i20 WRC as well. It was still a relatively trouble-free day for our Hyundai Shell World Rally Team driver.

Dani said: “Generally speaking, I was satisfied with the balance of the car, but we needed a bit more traction at the rear. The slippery stage conditions meant we were missing grip, and we lost a lot of time. We tried some changes on the differential at lunchtime service, but it wasn’t really enough.”

Following Hayden’s fiery retirement on Friday, we’d hoped for better fortune today. But it wasn’t to be. We had a very difficult morning loop with both Kevin and Thierry forced to stop mid-stage with issues.

Kevin was hoping to get more time in the 2015-specification i20 WRC car today after his shortened running on Friday. Starting again under Rally 2, which allows drivers to re-join the rally with a time penalty, Kevin had an early finish once again.

Along with his co-driver Seb, Kevin embarked on SS10  the 18.66km Baiao stage  but ran into trouble when they hit a rock that wasn’t on their all-important pace notes. There was no chance for them to continue.

“That was really a rally to forget,” he admitted. “We thought it couldn’t get any worse after yesterday so it was frustrating to stop again this morning. We hit a rock that was sticking out, and that was it, game over.”

In the first of his three scheduled WRC appearances this season, it is not surprising that Kevin was hoping for more time on the gravel stages.

“Portugal has not been a very good experience. We just wanted to complete decent kilometres but we have to learn from this disappointment, look ahead and focus on Sardinia,” concluded Kevin.

Thierry out of fuel

Thierry and Nicolas, rallying this weekend in the #20 New Generation i20 WRC, were fighting for a strong top-five result. After a solid opening stage this morning, they found themselves out of fortune in SS11, when their car ran out of fuel.

Team Principal Michel Nandan explained what happened: “Thierry’s situation was very frustrating and we are all feeling the consequences. It was human error but we have already identified what went wrong in the process and this will help us prevent it happening again. We are a team, and mistakes happen. It’s important to learn from them.”

Thierry agreed: “It’s a shame, of course, because we were aiming for the top-five,” he said. “We got an alarm in the car at around 15km into the stage and the car ran out of fuel. Everyone can make mistakes but the important thing is to learn from it as a team. We are working together, fighting and pushing hard. These things can occasionally happen. They shouldn’t but we have to look forward and focus on having a trouble-free finish to the rally on Sunday.”

Sunday will see four stages run, culminating with the Fafe Power Stage. With a total of 67.32 competitive kilometres still to rally, there are still plenty of things that can happen  as we’ve already seen this weekend!

Dani remained upbeat looking ahead to Sunday’s final stages: “We have four stages, including the famous Fafe, so it’s not over yet. We’ll keep pushing and hope to reward the incredible fans here with a good result.”