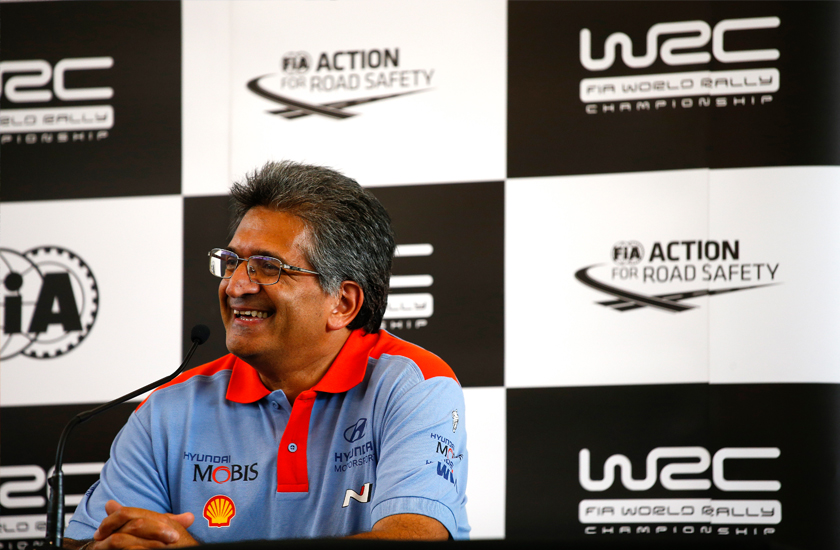 The curtain has fallen on the thrilling 2017 WRC season with the star-studded end-of-season gala at Sydney’s Museum of Contemporary Art.

Fresh from our impressive victory and double podium in Rally Australia, our drivers picked up a number of awards at the gala.

Thierry won the accolade for Most Stage Wins. He was also honoured with the Certina Timing Feat for his nail-biting Power Stage performance in Rally Argentina, which resulted in the third closest WRC finish in history. Hayden won the Social Media award for his online content throughout the season.

Our Team Principal Michel takes a look back at how the past season has gone for our team.

Michel, how would you summarise the 2017 season?

“I would summarise our 2017 season overall as one of good performance but missed opportunities. We started the year with new regulations and a brand new car, the Hyundai i20 Coupe WRC, so it was always difficult to know where everyone would be competitively against each other. Some labelled us as favourites early on, but we know reality paints a very different picture. The end result may not have been, on paper, what we aimed for, but we come out of this season stronger as a team.”

Starting with the positives, what do you take away from 2017?

“Securing four wins, the most we’ve ever taken in one season, and seeing our new Hyundai i20 Coupe WRC really excel and, at times, dominate. Our crews adapted quickly to the new car and Thierry, especially, was able to be regularly on front-running pace. Dani and Hayden had flashes of that level of performance, while we also saw Andreas immediate on strong pace in his three events with us. Despite some challenges, the team has shown improved potential, gained a vast amount of experience and, above all, mounted a strong championship campaign. We’ve been rallying at the top against some seriously tough competition.”

Where did the main issues occur?

“Mostly, we suffered from inconsistency from one rally to the next. We were competitive but there were some mistakes in several areas, which all combined to result in both championships being missed. Our crews will also be the first to admit that there were mistakes or confidence lacking at times this season. It all adds up, but we are not placing blame. We need to perfect all areas of our operation, and that’s where we’re focusing for 2018.”

What did you make of the competition?

“From the start of the year, it was always going to be an exciting, transitional season for WRC  and it’s certainly been fiercely contested. Thanks to M-Sport, Toyota and Citroën for a fun and intense season. It was arguably more closely fought than anyone would have predicted, which has been refreshing after years of domination from a single manufacturer. We never think of M-Sport as a privateer, nor that the championship would be a given; these close battles have brought out the best in all of us, and kept us pushing right to the end. It’s game on for 2018!”

“The battles we saw in Wales Rally GB and Australia were encouraging, with several of our crews fighting at the front. This is what we want to see in 2018, pushing our rivals to the limit right to the bitter end. We need to iron out the car issues we’ve experienced  unreliability and inconsistency  while continuing to do the very many things we’ve done well this year  excellent teamwork, dedication and determination. We all hope it will be another exciting season, but one that will deliver us even more wins and a shot at the Championship. I personally can’t wait for Monte-Carlo.”