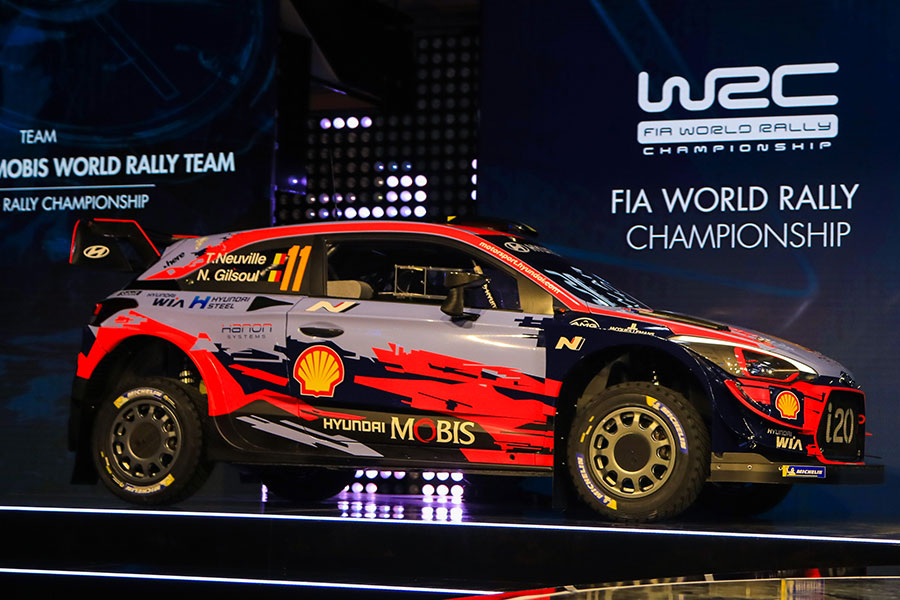 We have been formally presented with the 2019 FIA World Rally Championship manufacturers’ trophy at the prestigious FIA Prize-Giving ceremony in Paris.

The presentation marked the culmination of an incredible season for our team, in which we secured the WRC title for the first time.

Taking place at the Carrousel du Louvre, the ceremony saw champions from every major motorsport series assemble to receive their official awards. Attending the event were our President Scott Noh and Team Director Andrea Adamo.

“It was an honour to represent Hyundai at the FIA Prize-Giving ceremony, and for our company to receive the 2019 manufacturers’ champions trophy,” said Andrea. “It is the realisation of many years of hard work by our team in Alzenau, which has culminated this season in our first-ever title in WRC.”

He continued: “It is very humbling to have our efforts and results acknowledged alongside the very best in the motorsport community on a night of celebration. We will now stamp this fantastic milestone in our company’s history, and look together to more success in 2020 as defending champions.”

Thierry and Nicolas were also at the event to collect their driver and co-driver runners-up trophies, following a competitive season for the Belgian crew in which they took three victories (Corsica, Argentina and Spain).

“The FIA Prize-Giving ceremony is the official acknowledgement of success in motorsport. It is a privilege for us to have flown the Hyundai Motorsport flag alongside so many greats from rally and circuit racing,” said Thierry.

“Picking up the runners-up trophy for the WRC drivers’ and co-drivers’ championship gives Nicolas and me even more motivation for next season. For the team, receiving the manufacturers’ trophy is a huge achievement, and I am proud of the role that we have played in that success. Bring on 2020!”

Your chance to see BACK/STAGE!

To commemorate our debut WRC manufacturers’ title, we have produced an 11-part documentary series that takes a look behind-the-scenes throughout the 2019 season.

Entitled “BACK/STAGE”, each of the 11 episodes will dive into a particular theme or topic to tell the story of an epic title-winning season from our team’s perspective.

Featuring insight and reflection from Thierry, Andreas, Dani, Sébastien, Craig, Scott and Andrea, the series will be made available exclusively on our team’s Facebook and YouTube channels.

The opening episode is entitled “Made in Alzenau” and reveals the importance of work carried out at our factory in Germany. Further episodes will reveal our crews’ favourite moments of the season, as well as showing backstage footage.