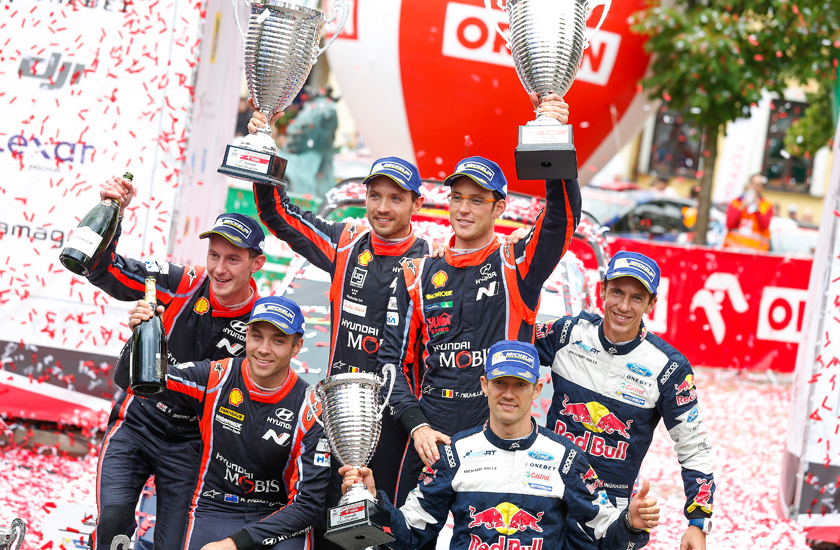 What a year it has been so far! With three victories and nine individual podiums after eight rounds, we find ourselves in a strong second position in the Drivers’ and Manufacturers’ Championships, and closing on the leaders!

2017 has been one of the most competitive WRC seasons in recent memory. Multiple rally winners, plenty of excitement, and many memorable moments along the way! Our crews have been in the thick of the action right from the start.

Beginning on the icy and snowy stages of Monaco and Sweden, we were able to demonstrate the power and pace of our latest challenger, the i20 Coupe WRC. 14 stage wins across the opening two events provided us with an insight into the potential of our new car  even if the results did not come our way immediately.

Fast forward to Mexico, battling against heat and altitude, Thierry and Nicolas were able to score our first podium of the year with a third-placed finish.

It was at the fourth event where our fortunes really transformed. Our Belgians Thierry and Nicolas claimed a brilliant victory on Corsican tarmac ahead of our Spaniards Dani and Marc in third. It was our first double-podium success since Rally Spain in 2016  a much needed boost.

Four consecutive gravel events followed Corsica. First up was Argentina and another milestone in our short history, as Thierry and Nicolas triumphed to take our first-ever back-to-back wins in WRC. Another double podium followed in Portugal, with Thierry/Nicolas and Dani/Marc claiming second and third respectively, before our Belgians extended their run of successive run of top-three finishes in Sardinia.

Then came Poland, at which we celebrated our most successful rally of the season so far. Securing twelve stage wins, including four stage 1-2s, we battled hard to an amazing 1-2 finish. Thierry and Nicolas took their third win of the year ahead of Hayden and Seb, who claimed their first podium as a crew.

We head into the final five rounds in a buoyant mood, determined to make 2017 our most successful WRC season to date. Thanks for joining us on this exciting journey!