The Hyundai Shell World Rally Team has achieved its pre-rally objectives of a three car finish in this weekends Rallye de France. 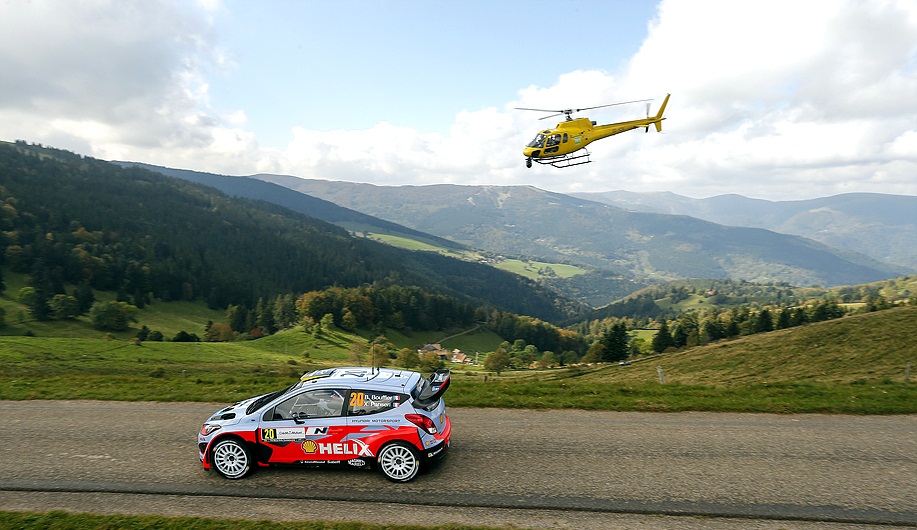 The Hyundai Shell World Rally Team has achieved its pre-rally objectives of a three car finish in this weekend’s Rallye de France.

October 5, 2014  The Hyundai Shell World Rally Team has finished Rallye de France, the 11th round of the FIA World Rally Championship (WRC), with all three Hyundai i20 WRC cars in the top ten, meeting the team’s primary targets for the event.

In its first full season in the WRC, the team has sought to accumulate as much experience as possible, and to improve the performance of its Hyundai i20 WRC car with each event. This weekend’s rally has allowed the team to acquaint itself with the French tarmac terrain in competitive rallying conditions, with all three drivers reported improvements over the course of the event.

Dani Sordo (#8 Hyundai i20 WRC, co-driver Marc Martí) had been involved in a closely fought battle for fourth place for most of the weekend and was on course to settle for a fine fifth place overall after Sunday’s final four stages. However, last stage drama for Robert Kubica handed fourth place back to Sordo, his second consecutive top five finish following second place in Rallye Deutschland back in August.

Sordo said: “There are a lot of positive elements to take away from this event. Generally, it has been a trouble-free rally and we have been able to make steady improvements to the car over the three days. It has been fun to be in the fight for fourth place but it wasn’t the way we wanted the rally to finish with Robert’s retirement in the final stage. A fourth place finish in this tough rally is quite good and we have learned a lot about the car. The team has worked very professionally and I think we can be satisfied with our achievements.”

Thierry Neuville (#7 Hyundai i20 WRC, co-driver Nicolas Gilsoul) fought back strongly after a broken turbo on the first day put him right down the classification. The Belgian showed real grit and determination to reclaim a top ten position at the end of Saturday and some strong stages on Sunday morning elevated him to ninth position overall before moving up to eighth in the final stage.

Neuville said: “It was always going to be tough to fight back after our issue on Friday but we pushed hard and I think we can be pleased. For the team, to have another three car finish is very useful for our continued learning, and for me personally, I feel that I have done the maximum. It was a good final morning with some nice stages and competitive times. Of course, we would have liked to have finished further up the classification but the team has done a fantastic job to allow us to complete the rally and to make improvements to the car.”

Frenchman Bryan Bouffier (#20 Hyundai i20 WRC, co-driver Xavier Panseri), taking part in his second WRC event with the Hyundai Shell World Rally Team, made the most of his home rally to claim his first finish with the team and a top ten result.

Bouffier said: “It has been very enjoyable to take part in Rallye de France, my home event, and to have such great support from the local fans. We took things a bit easier today, not to compromise the three car finish and we had a lot of fun on the stages. A top ten finish is ok considering how tricky the weekend has been. We have tried our best and the team has done a good job to help us to get a better feeling with the car. There is obviously room for improvement but we’ve come here to learn and improve  and we’ve achieved that.”

Rallye de France has given the Hyundai Shell World Rally Team a thorough test of its operations this weekend with some outstanding team work. Another three-car rally finish gives the team a wealth of data and information from this rally which will be invaluable to the team’s ongoing improvements.

Team Principal Michel Nandan said: “I am pleased that all three crews have finished the rally in the top ten. A three car finish is always our first objective. There is no question that this rally is tough and we have had to adapt and improve the Hyundai i20 WRC over the three days. The team has handled this exceptionally well. Dani has had a solid rally and it was good to finish in fourth place! It was an exciting battle so we were sorry to see Robert retire on the final stage. Thierry’s problem on Friday prevented him from fighting nearer the front of the overall classification but he put in a strong recovery drive to eighth. Bryan has also shown firm commitment and it is good to see him finish his home rally in ninth place. We have learned a lot this weekend and we will use that to our advantage for the final two rounds of our debut WRC season.”