Day 1: Thierry and Nicolas lead the way as WRC 2017 begins 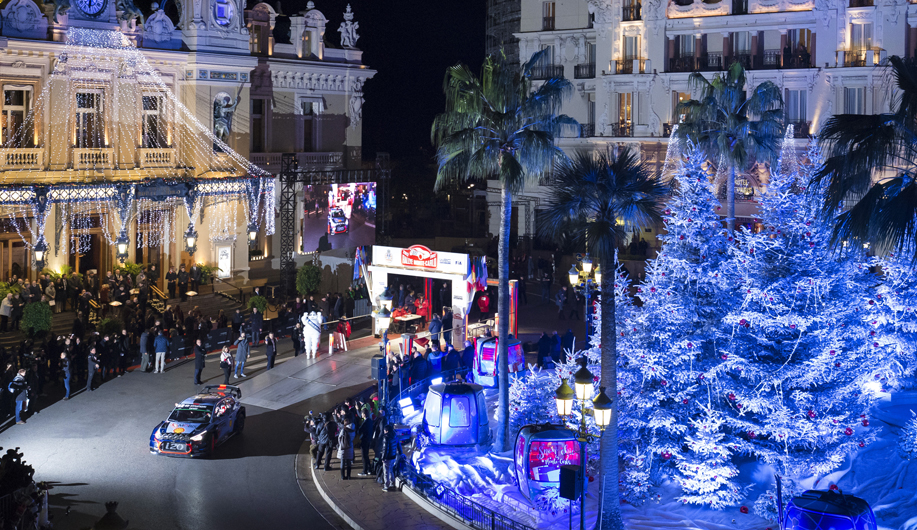 Day 1: Thierry and Nicolas lead the way as WRC 2017 begins

The glitz and glamour of Monaco once again provided a fitting backdrop for the start of a brand new season of the World Rally Championship, as crowds gathered in the Principality on Thursday afternoon.

The new-look cars came off the famous starting ramp with great anticipation for the new era of the sport. Our three Hyundai i20 Coupe WRCs certainly looked ready for action.

Our Belgian crew was quick to show the potential of our new car. The cancellation of SS1 meant that only reigning Champion Sébastien Ogier and Thierry could set times. In the following SS2, a late night test on the Bayons-Bréziers stage, it was the 2016 vice-Champion who set the benchmark.

Thierry and Nicolas were 7.8-seconds quicker than the rest of the field, establishing a strong early lead with 15 stages yet to contest.

“We have used today to really start discovering the car in competitive rally conditions for the first time,” explained Thierry. “The stages here are tough, but we have had a decent start. We have more to come and areas where we need to improve.”

Dani and Marc had a trouble-free run in the #6 car. “Today, it was important to have a clean run through the opening stages,” said Dani. “The feeling from our Hyundai i20 Coupe WRC was better than expected; the car felt strong and fast. I enjoyed getting a taste for it now we are in full competitive mode.”

Our Team Principal Michel Nandan was also pleased to see the new car make its debut: “It is always special when we see the fruits of months of hard work finally competing on the World Rally stage. Our Hyundai i20 Coupe WRC is the result of an intense collaborative effort from the entire team, so we take great pride starting this new WRC season.”

It wasn’t an easy Thursday for our team. Hayden suffered a crash towards the end of the opening stage, after hitting some ice on the road. The car was sent into the side of the mountain and onto its side. The stage was stopped, and ultimately cancelled, as a result. As a mark of respect for the spectator who sadly passed away during that incident, we have decided to withdraw car #4 from the rally.

“That wasn’t the start we wanted to this first rally of the season,” said Hayden.”We got caught out by some black ice near the end of the first stage. The car snapped sideways and, from there, we were just passengers. I am incredibly saddened by today’s accident and my thoughts are with the family and friends of the person involved.”

The second of this weekend’s four days of Monte-Carlo action will take in 160.80km of special stages on Friday. A loop of three stages  Agnières en DévoluyLe Motty (24.63km), Aspres-lès CorpsChaillol (38.94km) and St Léger les MélèzesLa Bâtie Neuve will be run twice, once in the morning and again in the afternoon.