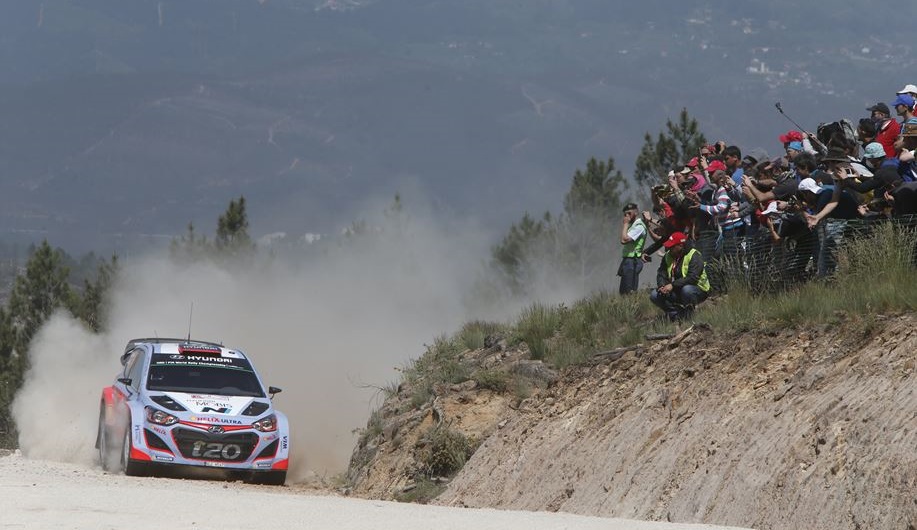 May 23, 2015  The longest day of the Portugal event saw drivers tackle six stages over a total of 165km, with tyre choice once again being an important factor in performance.

Dani Sordo enjoyed another trouble-free run and finished the day in sixth position overall. “We haven’t been able to find the same rhythm and speed as yesterday but it has not been a bad day,” said the Spaniard. “We now have to prepare well for the final three stages tomorrow, including the famous Fafe stages where we have some previous experience – so we can resume our close fight with Hayden and Mads for the top six.”

Kiwi driver Hayden Paddon also continued his excellent progress into Saturday’s stages. He set a series of top-six stage times and moved up to seventh place overall by the end of the day. “Overall it’s been another good day,” he said, “although we damaged the gearbox at the end of the last stage and were fortunate to make it back to service. It’s been pleasing to make up ground in the overall standings. We have three final stages tomorrow to bring the car home as strongly as we can.”

Thierry Neuville did not have the same fortune as his team-mates and rolled his car just two kilometres into the opening stage. He was unable to continue and will resume the rally tomorrow under Rally 2 to gain more experience on the new stages. “We approached a tight right-hand turn and rolled the car,” said the Belgian. “I am very sorry to the mechanics and team. We have some knowledge of the Fafe stages so I’m hoping for a positive final day to what has been a tough rally for me.”

It has been a day of learning for the team, who have had to get used to the stages of the different Rally de Portugal location. There is plenty to fight for on Sunday’s final stages, with the legendary Fafe stage run twice, once as the power stage, and the 32.35km Vieira do Minho stage.

“Tyres have again been a big influence on performance today and we have learned a lot about the strategy required for this event. Dani and Hayden ran well today and are both in a close contest for sixth, although it is clear that there is room for improvement in our performance,” said Team Principal Michel Nandan. “The only negative for Hayden was hitting a rock on the final stage, causing a lot of damage. Thankfully, it didn’t cost him much time in the stage. Thierry’s retirement this morning was a real shame for him and the team. We hope he can use tomorrow to find a good rhythm.”