Hyundai Shell World Rally Team have experienced a contrasting day in Argentina after impressive work to get both drivers back into the rally after Fridays difficulties. 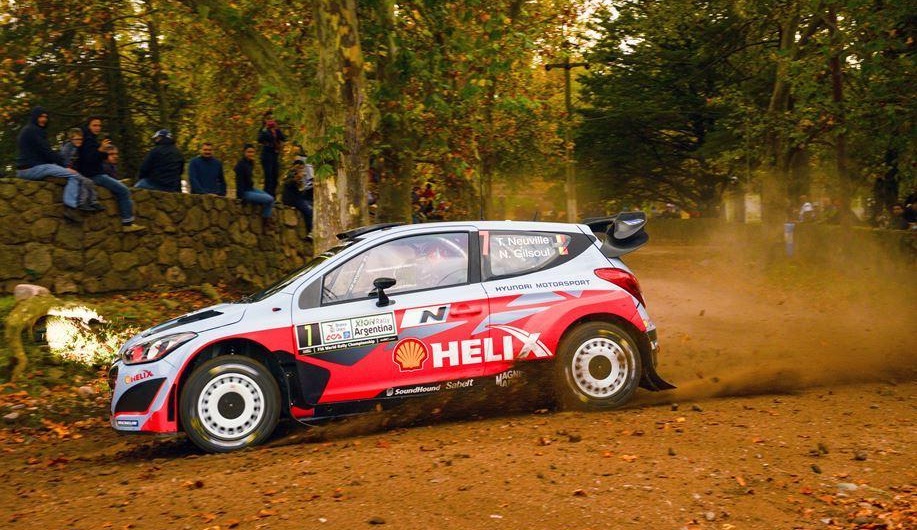 Hyundai Shell World Rally Team have experienced a contrasting day in Argentina after impressive work to get both drivers back into the rally after Friday’s difficulties.

May 10, 2014  It has been a day of mixed fortunes for Hyundai Shell World Rally Team on the penultimate day of action in Rally Argentina. The #7 Hyundai i20 WRC car has mounted a strong fight back following complications on Friday to be in the top five overall, including registering the team’s fourth stage win in the Super Special Stage SS10 this evening. The #8 car was unfortunately forced to retire after an incident in this morning’s opening stage.

Both Hyundai i20 WRC cars of Thierry Neuville and Dani Sordo were able to rejoin the rally this morning, under Rally 2 regulations, following their retirements during SS5 on Friday afternoon. The Hyundai Shell WRT mechanics and engineers worked tirelessly on the cars to ensure they were rally-ready before the 3am cut-off last night, allowing them to start again in time for this morning’s opening stage.

Saturday’s itinerary has encompassed a repeat loop of two long stages followed by a Super Special Stage in the early evening. The 39.99km San Augustin-Villa del Dique stage (SS6 and SS8) was followed by an equally tough 39.16km Amboy-Yalanto stage (SS7 and SS9), requiring precision, focus and commitment from drivers with conditions markedly better than the opening day. The final SSS, won by Neuville, brought the daily total to 164.34km with just 76.78km left to run on the final day tomorrow.

Thierry Neuville (#7 Hyundai i20 WRC, co-driver Nicolas Gilsoul) was quickly back on the pace this morning with renewed confidence in himself and the performance of his Hyundai i20 WRC. The Belgian set the fourth fastest time in SS6 and fifth in SS7. Competitive performances in the afternoon loop, including a top five time in SS9 and a classy stage win in SS10, helped lift Neuville into the top five overall with four stages remaining on Sunday.

Neuville said: “We have had a very positive day with clean runs and we had a good push in all stages. We took back some of the time we lost yesterday and we are now in a good place to fight for fifth position if everything continues well. The road conditions were a bit better compared to yesterday so we were also more confident and could really enjoy the driving especially on the fast sections of the stages. It was really nice to see everyone pushing. We tried some set up changes for the afternoon and we were able to find more improvements which helped us move into the top five. It was nice to win the final stage of the day and we will keep pushing tomorrow to learn more and to try and secure a top five result.”

For Sordo (#8 Hyundai i20 WRC, co-driver Marc Martí), it has continued to be a frustrating rally. Despite the team’s valiant efforts to get his car back in shape after an exhaust manifold issue ended his day early yesterday, he encountered further trouble in SS6 when he hit a ditch too hard. The Spaniard nurtured his car to the end of SS6 but the incident had affected engine components, including the turbo intercooler, which reduced the car’s power output. The team opted to stop the car to prevent further damage and carried out a thorough inspection at service. It was the right decision because the team noticed a drop in oil pressure and made the decision to withdraw the car from the rally to further investigate the problem back in Germany.

Sordo said: “I am obviously very sorry that we had to retire from the rally, the team worked incredibly hard last night to fix the problem with the exhaust manifold and to prepare the car for today’s stages. We were aiming to use Rally 2 to build up our experience of this tough rally but shortly into this morning’s first stage, I hit a ditch very hard and this caused some damage to the engine which forced us to retire. We will look back on this rally as character-building with some very difficult conditions. We are a young team so we have to take the positive elements from the weekend. I think everyone has shown a lot of professionalism in facing these problems and we’ve learned a lot.”

Team Principal Michel Nandan commented: “We have had a day of ups and downs starting with a retirement and ending with a stage win! Most importantly, we have worked tremendously well as a team, which, in our fifth rally, is a huge testament to everyone’s efforts. After a tough day yesterday, the team worked very hard last night to get both cars back into the rally this morning, which was a big achievement. Unfortunately, Dani had some bad luck as he damaged the car in a ditch which caused a loss of power. He was hopeful of making progress today so it’s a shame that we had to retire his car. Thierry was able to regain his pace from Friday and set some very solid, trouble-free stage times including the fastest time in this evening’s super special stage. We started the day in eighth place and his confidence in the Hyundai i20 WRC has allowed him to break into the top five heading into the final day. As a team, we look forward to the final four stages and hope to complete our experience of this demanding rally with a top five result.”