Mixing it up in Spain

Jari and Antti prove their worth in Rally de España 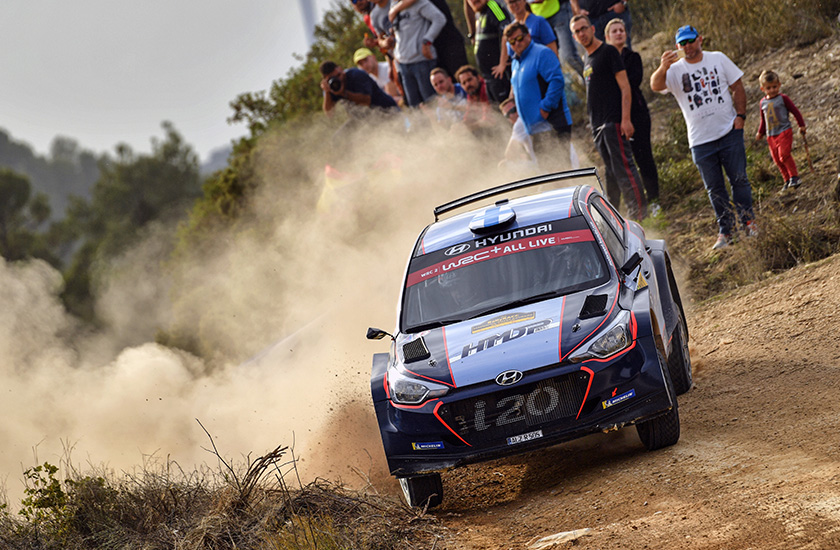 Jari and Antti prove their worth in Rally de España

Our HMDP crew Jari and Antti brought their WRC2 season to a satisfactory end in Spain with some scintillating stage times.

In their first-ever participation in the mixed surface Rally de España, the Finns had to face the added complication of unusually inclement weather conditions. Rain and colder temperatures made for tricky surfaces during the course of the 18-stage event, yet offered our HMDP crew a valuable test in the i20 R5.

The action got underway in earnest on Friday with a repeat loop of three stages  Gandesa (7km), Pesells (26.59km) and La Fatarella-Vilalba (38.85km). While the majority of the opening day was held on gravel roads, the longest stage uniquely incorporated tarmac sections.

Claiming the fastest time in WRC2 in the opening run through Pesells (SS3), the crew was then struck with a puncture in the final stage of the loop, losing two minutes of time. However, they were straight back on the pace after service with two top-three times to underscore their potential.

“If we look at our performance on Friday, I am very happy,” said Jari. “We were competitive in the i20 R5 and the speed was really good. To score a stage win on the opening loop in our first-ever time at this rally was very nice.”

As the action moved from gravel to tarmac for Saturday’s itinerary, wet weather made for a complicated day. After setting encouraging times in the morning, the crew was forced to retire on the start line of the penultimate stage of the day, SS13 (El Montmell 2) with a technical issue.

“There are definitely positives to take away from this rally, but also areas where we need to improve,” added Jari. “It’s been a bit like this throughout the whole season with some great results, like in Finland, but other rallies where we’ve struggled. Overall, I feel we have made some real improvements this year and hopefully it will give me and Antti a strong platform from which we can grow.”

Our Team Manager Alain Penasse said: “Jari and Antti had never competed on the mixed surfaces in Spain before and I think they acquitted themselves well. To be able to match the official Volkswagen and Skoda cars was impressive. The difficult tarmac stages and wet conditions that followed gave them another learning experience. In general, they have gained lots of experience this season. It’s been a good step for them as a crew and we look forward to more in the future.”

2018 FIA WRC 2 Championship for Drivers’ Standings
After round 12