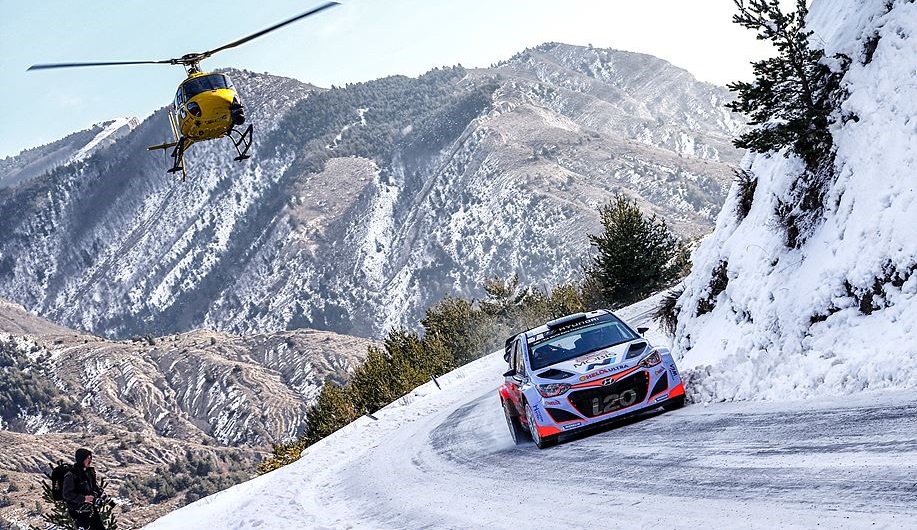 January 15, 2016  Hyundai Motorsport starts its 2016 WRC season at next week’s Rallye Monte-Carlo, where fans will see the debut of our New Generation i20 WRC.

The team is eager to continue from a successful 2015, where we challenged for second place in the Manufacturers’ Championship throughout season.aa

This year will mark the first time we enter three cars at Monte-Carlo. Two New Generation i20 WRCs will be driven by Belgians Thierry Neuville/Nicolas Gilsoul and Spaniards Dani Sordo/Marc Martí. Kiwis Hayden Paddon/John Kennard will be driving a 2015-spec car as they compete at Monte-Carlo the first time. They will then switch to a New Generation i20 WRC for Rally Sweden.

Rallye Monte-Carlo is the WRC’s oldest event, first run in 1911. Its stages cross the beautiful scenery of the Hautes Alpes and Isère, including the famous Col de Turini. 2016’s edition will see new stages, and existing stages run in new directions.

The region’s variable weather means quick changes between snow, ice and dry asphalt – even during a single stage! Tyre choice and pace note accuracy are vital factors. Asphalt suspension and a mix of studded and dry weather tyres will be used to combat unpredictable conditions.

The new car is ready to race after over 8,000 test kilometres, and Monte-Carlo will provide a tough first test. Two seasons of experience will benefit our drivers as they aim to improve on last year’s pair of top-six results.

“We are looking forward to the start of the 2016 WRC season, our third in this fantastic Championship,” said Team Principal Michel Nandan. “Rallye Monte-Carlo will be another important milestone for our team as we run our New Generation i20 WRC for the first time in rally conditions. The car has undergone an intensive development phase over the past year but Monte-Carlo will be the first opportunity to see how it compares to our rivals. For that reason, we will wait to see what happens in the opening stages before we set a specific target for this rally. We are pleased to have Thierry, Dani and Hayden with us – the first time we have fielded three cars at Monte! Thierry and Dani will give the New Generation i20 WRC its rally debut, while Hayden, in his first-ever Monte Carlo, will use an older spec Hyundai i20 WRC. Rallye Monte-Carlo is a unique event with tricky, changeable conditions, so we have to be prepared and ready to react. We had a decent result last year with two cars in the top-six. Our aim is to do better this year and get our season off to the best start possible.”

“Rallye Monte-Carlo is an exciting event and a pleasure to compete in,” said the Belgian, “though it is not always kind to drivers. We spent the winter break testing the New Generation i20 WRC and are very happy with how it’s been performing. The car is a definite improvement in all areas and certainly looks fit for World Rally stages! I am looking forward to its competitive debut though we will have to wait a few stages before we can really appreciate where we stand against our seasoned rivals. Together with my refreshed approach to rallying this year, I hope we can put in a good performance over the four days. We will use all our experience to fight for the podium and establish our intent for the season.”

Dani (#4 New Generation i20 WRC) starts his third season with us by driving Monte-Carlo for the eighth time, and looks to improve on his 2015 sixth place finish.

“I can’t wait to get started at Monte-Carlo, the first rally of a new season and debut of our New Generation i20 WRC,”said the Spaniard. “It’s a challenging event to start the year, a unique event and unpredictable, which makes it so special. As an event, it’s the best way to start the New Year, because we have to be on top of our game at all times. The new car has been great to drive in testing so I’m looking forward to seeing how it handles on Monte’s legendary stages. I finished sixth last year so am aiming to improve on that, but we know anything can happen in Monte-Carlo!”

Hayden (#10 Hyundai i20 WRC) will run 2016 as his first complete season with us. His experience in the 2015-spec car should see him adapt quickly to his first time at Monte-Carlo.

“I have seen and heard a lot about Rallye Monte-Carlo so am pleased to finally be rallying there,” said the Kiwi. “We will be using the old car for our Monte debut, which will be helpful when learning the stages. It’s one of the most challenging events on the calendar, so the old car will help us adapt to the conditions. It’s a rally of compromise, with tyre selection one of the most critical aspects of each stage. You could be starting in the valley on dry tarmac, but climb over 1000m to the Col where it’s full ice and snow. It’s in these circumstances you have to make your strategy call. It’s almost like a game of chess, which will be enjoyable. I’m thrilled to be part of the Hyundai Motorsport line-up for 2016 and I’m very excited to see what, together, we can achieve as a team this season.”

The 84th edition of Rallye Monte-Carlo covers 377km over 16 stages. The ceremonial start occurs on Thursday evening at Monaco’s Casino Square, before drivers enter the Hautes Alpes on Friday. On Saturday they loop back to Monaco for a thrilling last day that includes the famed Peira Cava summit finish and Col de l’Orme as the Power Stage.