On course for a Polish podium

Hayden and Thierry increase their grip on 3rd and 4th 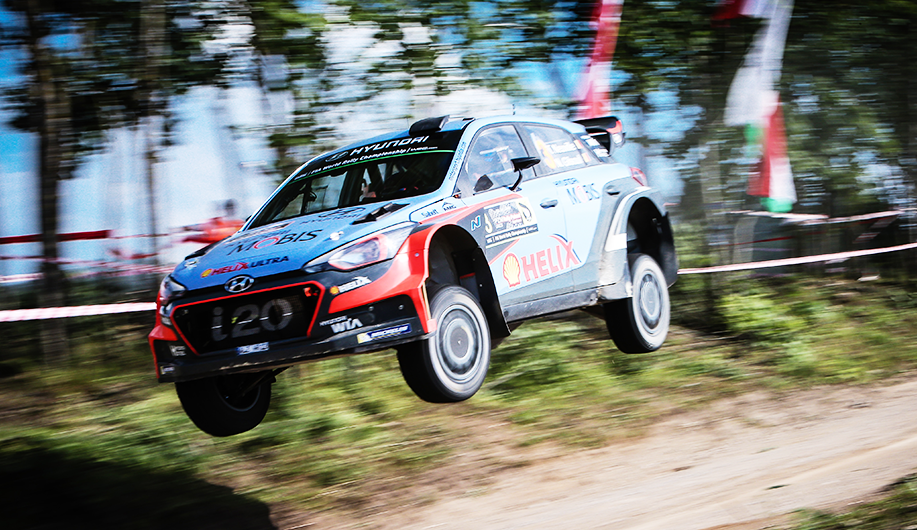 Hayden and Thierry increase their grip on 3rd and 4th

Things are heating up as Rally Poland approaches a thrilling finale! After 17 of this weekend’s 21 stages, Hayden holds third place with Thierry right behind in fourth.

There is a chance of some rain on the final morning, which will add to the excitement. Only 27.8-seconds separate rally leader Ott Tanak, second-placed Andreas Mikkelsen and our Kiwis Hayden and John.

“It’s been fantastic to see our New Generation i20 WRC perform so strongly here,” said our Team Principal Michel Nandan. “The rally is far from over, so we can’t get complacent. The drivers have been very consistent this weekend, and have approached the rally with the right mentality. The battle for the podium  and potentially the fight for the win  will be fascinating.”

Hayden and John have regained the form that saw them finish second in Sweden and dominate in Argentina.

Our NZ crew, driving for the Hyundai Shell World Rally Team, have met the challenges of the fast Polish stages. They set consistent top-five times on the technical tests of Goldap, Stanczyki and Babki.

There was no lunchtime service on Saturday, so the changes made to the #4 New Generation i20 WRC were key to a successful day.

Starting the day in fifth place, it wasn’t long before Thierry and Nicolas made up a position in the #3 New Generation i20 WRC.

A solid morning loop allowed them to get past World Champion Sébastien Ogier and on the edge of the podium in fourth place. They built up their time advantage during the afternoon loop. Our Belgians have a 21-second advantage over fifth-placed Jari-Matti Latvala heading into the final day.

“The morning wasn’t perfect,” summarised Thierry. “We struggled with the pace notes on the opening stage. We then had a small issue with the gear lever, which cost us couple of seconds. But we have maintained our rhythm, keeping smooth and fast. I have been quite pleased with my driving and with our performance so far this weekend.”

Dani’s second position on the WRC Drivers’ Championship has meant driving second on the road in the stages so far in Poland.

Despite the disadvantage of cleaning the roads as one of the early runners, our Spanish crew are keeping upbeat.

“I’ve really enjoyed these stages again today,” commented Dani. “Our road position doesn’t help matters but this is the price we pay for being second in the championship. On these fast stages when you lift a bit, you lose a lot of time. We have to take the positives, and I’m remaining motivated!”

Sunday’s itinerary takes in four stages, run over a total distance of 60km. Baranowo (21.25km) and Sady (8.55km) will both run twice. The second run through Sady will be the Rally Poland Power Stage with more points up for grabs.