On target for third consecutive podium after tough Saturday in Mexico 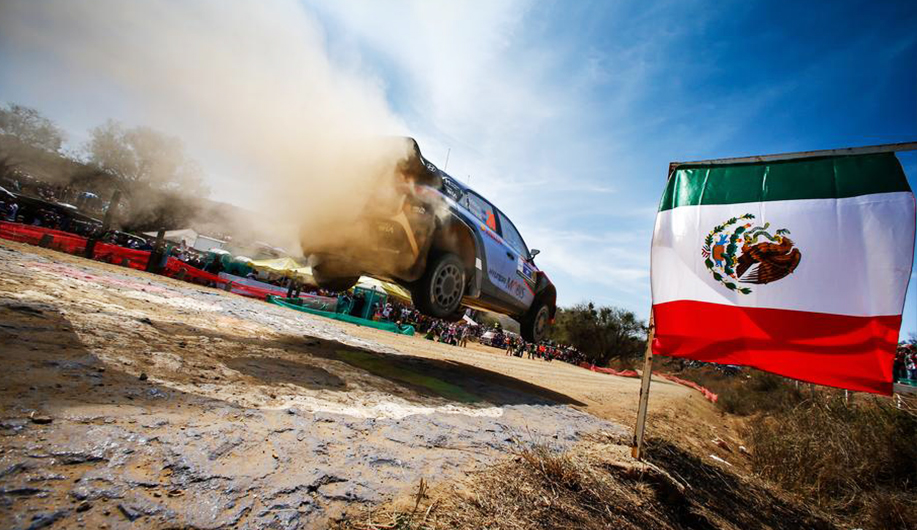 March 5, 2016  Our team takes another step towards our goal as we complete another tricky day at Rally Mexico, third round of the 2016 FIA WRC, with two drivers in top-five positions after Saturday’s stages.

Dani fought much of the day to defend his third-place from Andreas Mikkelsen. When the Norwegian retired in the second run of Otates Dani strengthened his grip on third and he now looks to a clean finish to claim his first podium of the season.

Hayden also battled to hold his top-five spot in the rankings  he goes into Sunday with less than a minute between him and fourth place.

Thierry unfortunately crashed in SS12 after some confusion with pace notes. Thankfully he is not injured, but he will not take part in the remainder of the rally.

Dani’s Saturday was not without issues  a damaged fan in the morning loop overheated his engine, and he also lost time after spinning out on SS12. But he Spaniard showed his experience and carried momentum through to the end of the day.

“The good thing is that we are still in the fight for a podium after what has been a difficult day,” said the Spaniard. “The long stages we’ve tackled today have resulted in a few issues. This morning’s loop was not so easy as we had a broken fan in the long stage, which caused overheating. We had to put the engine in safe mode and lost a bit of power as a result. We were lucky to make it to service because the temperatures got really high. I also overshot a junction about 300m before the end of that stage and spun the car, which lost us a few extra seconds. We fixed the problem over lunch but I didn’t have the confidence in the afternoon. I just didn’t like the balance of the car on the hard tyres. It was very slippery, almost impossible to drive. We had no traction in the rear and that is something we have to work on. We have another really hard day ahead of us tomorrow  with the long 80km stage  so we have to be focused. Our third place is not guaranteed so we will have to remain concentrated. The rally is not over yet.”

Hayden also suffered on SS12 with suspension damage. He then had gearshift issues in the second Otates run, but finished the day with a strong performance in SS16 and stays in fifth place overall.

“We can’t say it was the easiest of days today so we should be reasonably satisfied to hold a top-five position heading into the final day,” commented the Kiwi. “The first stage this morning was OK. We changed the set-up and the feeling from the car was more precise, which allowed us to push with more confidence. Unfortunately, we ran into difficulties at the start of the long SS12. We touched a bank near the start and broke the rear left suspension, which we could thankfully repair. The car was a lot of fun to drive in the subsequent stages but we had more trouble in the afternoon – in the repeat of Otates – where we had to manage several temperature excesses in the car  engine and brakes overheating – and we lost the paddle-shift which meant we had to go into manual. It was OK in the fast parts but much harder in the twistier sections. There’s still a long way to go into this rally so I’ll be happy to keep hold of fifth by tomorrow lunchtime.”

Thierry’s day took a turn for the worse when he crashed out in the troublesome SS12. He was taken to hospital with co-driver Nicolas Gilsoul and both were given the all clear. They take no further part in the rest of Rally Mexico but are already looking forward to Argentina.

“We started the day well taking the second fastest time in the opening stage (SS11 Ibarrilla) and felt confident heading into the longer Otates stage,” said the Belgian. “We started out in a good rhythm, trying to take advantage of our later road position. Unfortunately, I got caught 3km before the end in a fast corner section. One corner was much tighter than I originally wrote on my pace notes and we spun. The impact was quite strong and we lost a wheel. Consequently, we had to undergo some medical checks at the hospital but both Nico and myself are OK. We’re disappointed and very sorry for the team. I’m naturally unhappy that we could not score some big points this weekend, so we need to move on quickly from this and focus on the next rally in Argentina.”

It was a tough day for us with all three of our drivers having issues, but we reacted well and are still on track for a podium. If we finish like this on Sunday it would be our third consecutive podium in the first three events of 2016.

“Overall, I am reasonably content with our positions on the classification,” commented Team Principal Michel Nandan. “We have Dani in third and Hayden in fifth, which is not too bad considering the day we’ve had, There have been a few issues to deal with today that have made it a busy and occasionally difficult day for the team. Firstly, we are pleased that Thierry and Nicolas are fine after their off in SS12. Thierry was admitted to hospital for precautionary checks but everything was thankfully fine. It was a high-speed incident after what had been a positive start but they will not re-join tomorrow so the focus for them turns to Argentina. Dani’s third place comes in spite of some technical issues, initially with the fan, which caused the engine to overheat, and then with a spin at the end of SS12 that lost him time. He was not happy in the afternoon loop so we have to sit down to understand where we can find improvements for tomorrow. Hayden, too, had some challenges today with a broken suspension this morning and some gearbox related problems this afternoon. He regained the top-five after Mikkelsen’s stop in SS15 but we will now sit down to make sure we are as well prepared as we can be for tomorrow’s monster 80km stage and the final Power Stage. There’s all still to play for and a lot still to lose.”

Sunday’s stages will be just as difficult as today. First will be the monster 80km Guanajuato stage, which is the longest stage of the whole year, then a repeat of Agua Zarca as the rally’s Power Stage.