Hyundai Motorsport will return to the scene of its debut WRC podium next week as it contests Rally Mexico, the third round of the 2015 FIA World Rally Championship 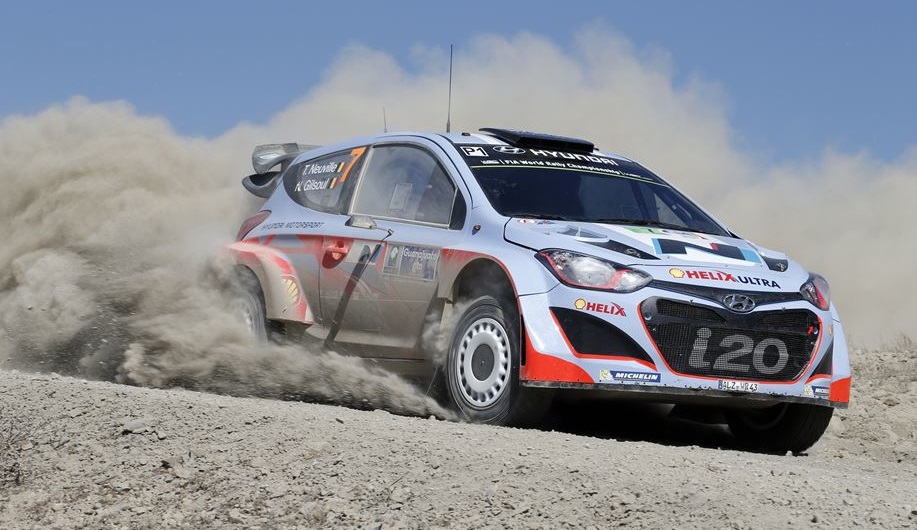 Hyundai Motorsport will return to the scene of its debut WRC podium next week as it contests Rally Mexico, the third round of the 2015 FIA World Rally Championship

February 27, 2015  Hyundai Motorsport hopes to continue its recent fine run of form as the FIA World Rally Championship (WRC) moves overseas for the first time this season for Rally Mexico, the third round of the 2015 season.

Mexico brings back happy memories for Hyundai Motorsport, recalling the team’s debut WRC podium just under a year ago, when Thierry Neuville and Nicolas Gilsoul memorably secured third place thanks to ingenious use of a bottle of Corona! Fast forwarding twelve months, the team heads to this year’s Rally Mexico holding second place in both Manufacturers’ and Drivers’ standings following a fantastic second place finish at a thrilling Rally Sweden earlier this month.

The arduous gravel stages of Mexico offer very unique challenges to WRC teams and drivers with altitudes reaching up to 2,700 metres above sea level and soaring temperatures. The dizzying heights, with thin air and lack of oxygen, punish WRC cars with particularly suffocating effects on engine power. Hyundai Motorsport has prepared the i20 WRCs for the tough conditions and the team will introduce a new engine upgrade for Mexico.

Recognising the work still required to improve its overall competitiveness in the WRC, Hyundai Motorsport carried out a pre-event test in the Extremadura region of Spain last week, with a focus on set-up and endurance, replicating some of the stage characteristics expected in Mexico. All three drivers took part in the test with Neuville testing one full day, the returning Dani Sordo one-and-a-half days and Hayden Paddon for two days.

Team Principal Michel Nandan said: “Mexico holds special memories for our young team as we celebrated our first ever WRC podium at the event last year. It was a great result for us, in our third event, and a memorable occasion. We got to this year’s rally on the back of a positive weekend in Sweden in which we scored a podium result with Thierry and Nicolas in second place, and a strong three-car finish. We cannot let ourselves be complacent, as we are still a young team and know there is a lot more work to be done. We are pleased to welcome back Dani to the team for Mexico, having been given the all clear after his recent injuries. Dani joined Thierry and Hayden at a pre-event test in Spain last week, in which we prepared for Mexico. The altitude will be one of the key factors in this rally so we have tested these conditions on the engine test bench. We also continued to test our paddle shift, which still needs some fine-tuning, but we are confident this will be ready for Argentina.”

Hyundai Shell World Rally Team driver Thierry Neuville (#7 Hyundai i20 WRC) was one of the stars in Sweden and is currently second in the overall drivers’ classification. He tested for one day in Spain last week, one day fewer than originally planned, but the Belgian is still confident for Mexico, an event he loves.

Neuville commented: “Mexico has been one of my favourite rallies in recent years, and the scene of some great results. I have finished on the podium there in the past two years, including taking my first ever podium in 2013 and the first ever Hyundai WRC podium last year. It is a demanding event with the extreme altitude and high temperatures combining to make it a physically tough rally for us drivers, as well as very hard on the car. We had a day of testing in Spain to prepare for Mexico. The team is pushing hard to develop the Hyundai i20 WRC and there are more improvements coming soon. I will continue to push to the maximum and hope we can celebrate in Mexico like we did last year  with a podium!”

Dani Sordo (#8 Hyundai i20 WRC) returns to the Hyundai Shell World Rally Team having missed Rally Sweden through injury. The Spaniard has been given the green light to rally in Mexico, and he reacquainted himself with the #8 car with a day-and-a-half of testing in his home country last week.

Sordo said: “I am really pleased to be rejoining the team for Mexico. It was the right decision to sit out Sweden and to rest fully. The team got a great result at the last event and it was encouraging to see two cars in the top five, but obviously I prefer to be part of the action. I joined the team for a test in Spain last week to get myself ready for Mexico, which is an event I know quite well. I didn’t compete there in 2014 but I finished fourth in 2013, so I hope we can compete near the front. It will be a physically hard rally with some extremely long stages, which can be very satisfying to get right, and very punishing if you make a mistake. It is always a pleasure to have the support of the Spanish speaking fans and I can’t wait to get back behind the wheel of the #8 car.”

Hayden Paddon (#20 Hyundai i20 WRC) got his 2015 season off to a flying start in Sweden, as he stood in for Sordo in the #8 car and finished fifth overall. Now back in his #20 car with the Hyundai Mobis World Rally Team, the New Zealander will take part in his first ever Rally Mexico, continuing his adaptation to WRC life.

Paddon said: “Mexico will be another new event for me, although we did the recce with the team last year so it will have some familiarity. We had a good two day test in Spain last week in order to prepare for Mexico, with layouts similar to some of the stages in Mexico. It was certainly a contrast from the conditions we faced in Sweden. I was pleased to finish fifth in Sweden and to add Manufacturer points for the team, but I know there is more to come. These first events of the year will still require an element of learning for us and I am hoping that I can adapt to the conditions in Mexico as well as I did in Sweden. We want to be fighting near the front but we must acknowledge this is still relatively new territory so we’ll take each stage as it comes.”

Rally Mexico’s itinerary is one of the most jaw-dropping on the calendar with some truly gruelling stages. Drivers will have to tackle the 44km El Chocolate, the 43km Otates and Sunday’s monster 56km Guanajuatito stage. A total of 400 competitive kilometres make up 40% of the overall distance covered, making Mexico one of the most compact events of the year. The rally gets underway with a live street stage in Guanajuato followed by one Super Special. The action gets tougher on Friday around the area of the Léon Service Park and Rally HQ, building up through the weekend to a captivating conclusion  with the longest stage of the weekend and the El Brinco Power Stage.