Thierry Neuville and Dani Sordo debuted our new car on Monte-Carlo's Thursday evening stages; Hayden Paddon drove a 2015 i20 WRC for his first time in Monte-Carlo 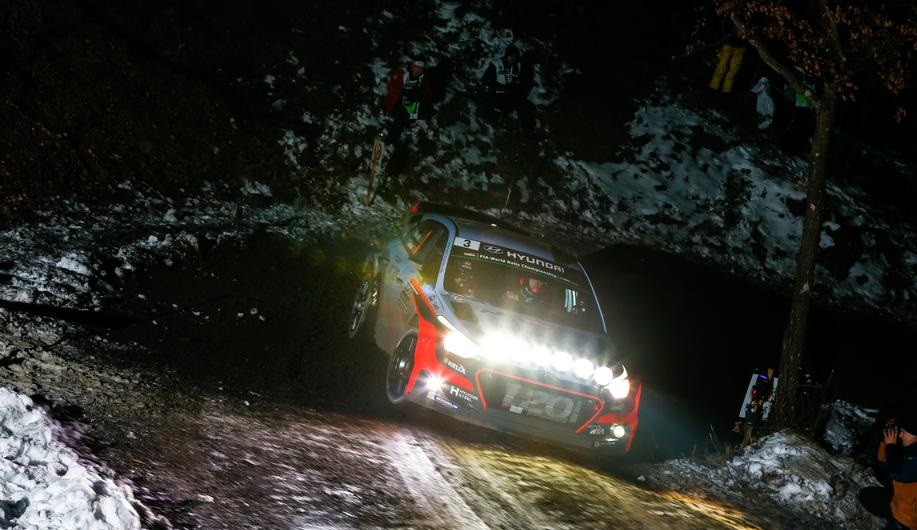 Thierry Neuville and Dani Sordo debuted our new car on Monte-Carlo’s Thursday evening stages; Hayden Paddon drove a 2015 i20 WRC for his first time in Monte-Carlo

Today marked the first rally of our brand new car  the New Generation i20 WRC  and our first time entering three cars at Monte-Carlo.

Thierry and Dani put our new car through its paces to end the day in fourth and tenth respectively. Hayden Paddon drove a 2015-spec i20 to finish fifth overall in his first time competing at the event.

Now we head into the first full day of rallying after a steady start, with all three of our drivers in the top ten.

Thierry started well and quickly getting to grips with the new car on Monte’s testing stages. He ended the day in fourth place, looking to build on his top-five result from 2015.

“We can be satisfied with this opening day,” said the Belgian. “It’s fantastic to start the new season with our New Generation i20 WRC and get the first competitive stages under our belt. It’s hard to know where we are after the first two runs. Conditions were slippery and our aim was just to get through without trouble. I took it a bit too carefully in the second stage this evening; I didn’t want to make any mistakes. I could have pushed more in places but we are still learning the car and adapting to the Monte conditions, so we have to take things stage by stage. I look forward to tomorrow!”

Hayden made a strong start to his first full season with us, taking his 2015-spec car to fifth overall. He will acquaint himself with this tricky event before switching to a New Generation i20 WRC for the rest of the season.

“It’s a pleasure to start our first full season with Hyundai Motorsport with a debut at the legendary Monte-Carlo,” commented the Kiwi. “We have the previous specification i20 WRC for this event  which showed good performance last year  as we learn all about this special but tricky rally. I took things easy in the first two stages this evening, adapting to unpredictable conditions and focusing on what we needed to do. I made a good tyre choice in the second stage, opting for no studs, which played into our hands at the start but required us to take it carefully on the icy sections. We’re here to learn and that’s precisely what we’ll continue to do tomorrow.”

Dani was also cautious in the conditions and finished in tenth, ready to find improvements during tomorrow’s rallying.

“It was not the start we hoped for but there’s plenty more to come,” admitted the Spaniard. “We lacked a bit of confidence in the opening stage, which was slippery in places, and I didn’t feel comfortable to push. Then, in the second stage, I wasn’t overly happy with the handling of the car. Tomorrow’s another day but we know we have the performance potential in this New Generation i20 WRC and we will look to build on today. There is a good atmosphere in the team and we’re just at the start of what will hopefully be a positive season.”

The team knows it will take time to tap fully into the new car’s full capabilities. We will approach tomorrow with confidence as we use Monte’s stages to continue to adapt to the car and build on its encouraging start.

“We’ve started our third season in the FIA World Rally Championship in good spirits,” said Team Principal Michel Nandan. “It has been a special moment to see our New Generation i20 WRC complete its first stages. This new car is the product of a lot of hard work from the team in Alzenau and I’m sure everyone shares in this proud moment. All three drivers have quite rightly taken a cautious approach to these first stages with Thierry and Dani in the new car and Hayden embarking on his first-ever Monte-Carlo rally in an older generation i20 WRC. Monte is a special event and not really indicative of the rest of the season, so our aim is to learn more about the New Generation i20 WRC in competition over the next three days. It may be our third season in WRC but the learning never stops. One thing is for sure, it’s great to be back rallying!”