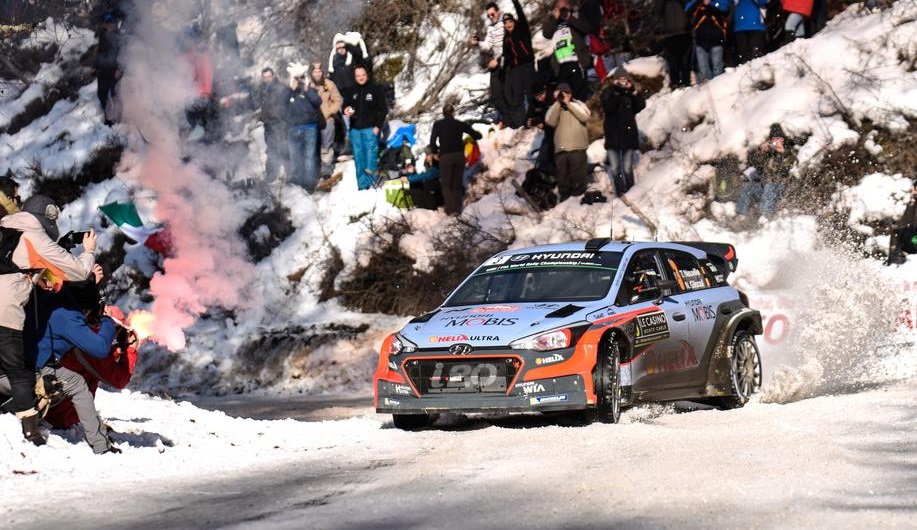 January 22, 2016 After a difficult day on the demanding stages of Rallye Monte-Carlo we complete the first full day with both New Generation i20 WRCs inside the top-seven, following Friday’s six special stages.

Thierry is our highest-placed driver and took fifth overall with a string of consistent stage times. Danialso improved his position after a cautious start yesterday, finishing in seventh overall.

Hayden’sday at the wheelended early whenhe slid out on ice in his 2015-spec i20. He lost his rear-left wheel when he hit a tree and was forced to retire. He will re-join the event under Rally 2 tomorrow.

Thierry set top-six stage times on allhis runs today, including a top-three finish on SS4. He hopes to unlock more pace from the new car as the weekend continues.

“It’s been a difficult but useful day for the entire team as we look to make improvements to the New Generation i20 WRC,” said the Belgian. “This morning’s loop was really tough. The car was bouncing around a lot because the suspension settings were too soft. We made some changes over lunchtime service, which definitely helped. However, we weren’t on the best tyre to make the most of those changes so we were missing some traction. We have to put what we learned today into practice for the rest of the weekend so we can build on this base. The feeling is getting better, as is the understanding of the car, so we’ll continue in this way. I’m feeling good in myself and it’s nice to be fighting consistently in the top-five.”

Dani has not found his confidence yet at Monte this year, but still fought hard to hold seventh at the end of today. He will look to make improvements for tomorrow’s stages.

“It hasn’t been the best of days for me but we are still adapting to our new car” said the Spaniard. “We knew we’d have some lessons to learn in these opening stages and so it has proved. The set-up we had this morning was not really a good match for me and I couldn’t get the confidence you need in Monte-Carlo’s slippery conditions. We made some changes to stiffen the suspension but we had no grip with the soft tyre, so couldn’t push as we wanted. We know we have work to do but we will focus on this as a team tonight and hope to make some advances tomorrow.”

Hayden made a promising start to his first Monte and was fifth at the start of the day. He was forced to retire in stage three but will continue to learn the stages tomorrow.

“The morning didn’t go at all how we planned,” admitted the Kiwi. “We got caught out by a patch of ice that pitched the rear of the car into a tree, pulling off the rear-left wheel. There was no way we could continue so we had little choice but to retire. We knew it would be a rally of learning but we weren’t expecting our first full day to be over so soon. That’s the nature of this rally, I guess. We are able to come back tomorrow under Rally 2 where we’ll look to resume our learning curve  with the mighty 51km stage first thing. That will be our next big test.”

We have already shown ourselves as consistent competitors this year with our new car takingregular top-five stage times. It is a clear improvement over our 2015 season opening, and we look forward to making more advances.

“We had no preconceptions over the performance of the New Generation i20 WRC here at Monte-Carlo,” said Team Principal Michel Nandan, “but there are some positives we have found after today’s two loops. The set-up of the car was not optimal on the first pass; we started with a softer snow set-up based on our pre-event test programme, which did not suit the drier tarmac conditions encountered this morning. Thierry and Dani both reported the car to be too soft on the suspension so we stiffened that over lunchtime service and saw immediate improvements in the afternoon loop. Unfortunately, the tyre choice was not the best for the final three stages but we found a better direction for the car itself. Tomorrow’s itinerary, which includes two attempts at the monster 51.55km Lardier etValenca-Faye stage, will offer a new challenge but one we are ready to tackle. Hayden had an unfortunate morning, getting caught out by one of Monte’s hidden dangers but he’ll be back tomorrow to continue his own learning.”