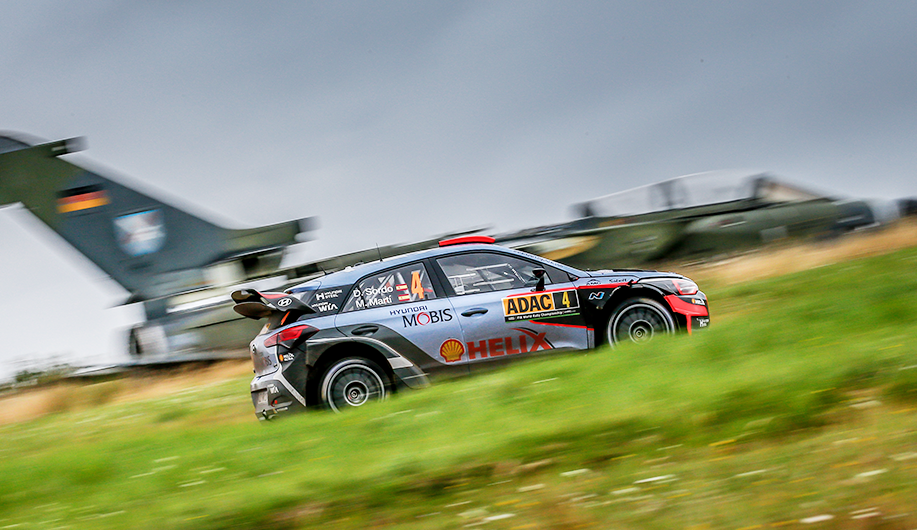 Four seconds! That’s all that separates three crews in an exciting fight for second position in Rally Germany. And two of our drivers are firmly in the chase as our home rally enters its final countdown.

It’s already a stern test of man and machine but the weather has added an extra challenge. Saturday’s stages have all been about tyres, temperatures and terrain conditions!

Changeable weather made conditions unpredictable on the penultimate day. Our crews were forced to make a tough call between the soft or hard compound Michelin tyres, not knowing whether they would be facing wet, damp or drying asphalt  or a mixture of all three.

Our Team Principal Michel summarised the difficulty at the end of the day: “It’s not been easy from a strategy point of view,” he said. “The stages and weather this morning were not as we’d expected so we found all crews on tyres that were not best suited to the conditions. It was something that caught out most drivers. The afternoon went more smoothly.”

Thierry and Nicolas showed just what an improvement there was after lunchtime service. Our Belgians expertly took the #3 New Generation i20 WRC to two consecutive stage wins at the start of the repeat loop.

“The start of the afternoon wasn’t ideal as we overshot a hairpin in SS11,” admitted Thierry. “That cost us a few seconds. After that, we started to pull things back with two stage wins in SS12 and 13, as well as a decent final run through Panzerplatte.”

Dani and Marc were able to move into third position after a strong final run through Panzerplatte. Our two Hyundai Shell WRT crews are separated by only 0.4 seconds with four stages to run on Sunday.

“The New Generation i20 WRC was perfect today,” smiled Dani. “I had a good feeling and we could set some competitive times. It’s very tight with Andreas and Thierry, so we have an interesting fight on our hands. A podium is definitely our target but it’s far from guaranteed!”

Thierry is also looking forward to the final stages: “It’s great to be involved in an exciting battle with Andreas and Dani. The gap is incredibly close for the podium so we’ll have to be on top of our game on Sunday,” he said.

Following a character building Friday, Hayden and John enjoyed a more positive Saturday. Our Kiwi pair moved up three positions to claim a comfortable top-five heading into the final morning.

“A tricky day with slippy changeable conditions,” wrote Hayden on his Facebook page. “Not at the level we want but it’s a bonus that we have got back into the top five. I’m determined step by step we will make the necessary progress – it’s just a matter of being patient.”

Sunday will offer four final challenges in the form of the Dhrontal and Sauertal stages. 60 competitive kilometres are all that separate us from a home podium, but we know too well that anything can happen on the final day.

“Sunday promises to be equally competitive,” says Michel, “so there’s a lot still at stake!”

Keep your fingers crossed, or “Drück die Daumen”, as we say in Germany!