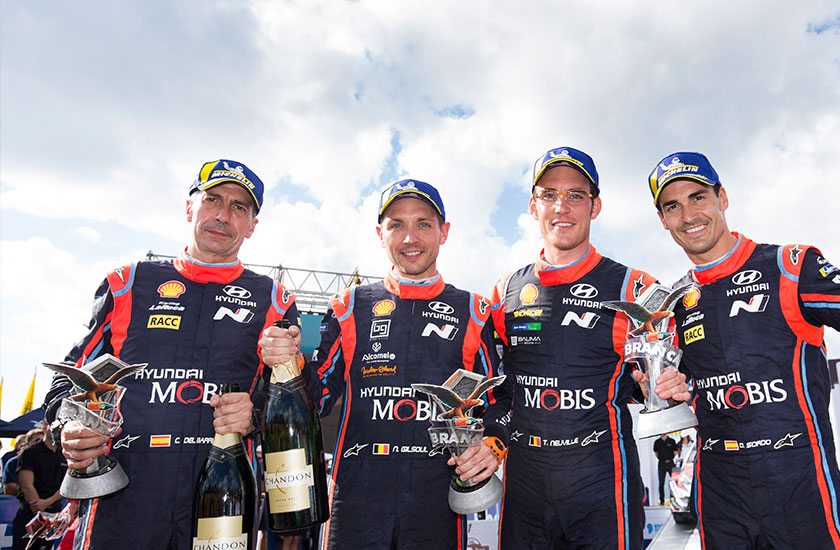 There were no uphill struggles for our crews on the final day of Rally Argentina, as we registered our second double podium result of the 2018 WRC season in style.

Thierry and Nicolas were the closest challengers to rally winner Ott Tanak, finishing in second place, ahead of our Spaniards Dani and Carlos in third. Andreas and Anders were also on fine form on Sunday, ending the rally in a fighting fifth.

“A good result,” summarised our Team Principal Michel. “We set out to secure podium finishes and the crews did everything we asked of them. I said after Corsica that I wanted a stronger all-round team performance. I would say it’s a job well done.”

Sunday’s itinerary included two runs up the famous El Condor and the 22.41km Mina Clavero. The stages were lined by thousands of fans all ready to enjoy the WRC action. And what a spectacle they got!

Our three crews performed strongly with a clean sweep of stage wins. Andreas and Anders took the honours on SS16, the first attempt at El Condor, before Thierry and Nicolas led a 1-2-3 for our team on SS17. Our Belgians then claimed maximum points in the Power Stage.

“I am thrilled to finish on the podium,” said Thierry. “The team has done a great job and I am hugely thankful for everyone’s contribution. We knew we had to give it a push to take as many points as we could off Séb (Ogier).”

For Dani and Carlos, a second gravel podium of the season was a welcome reward for a competitive weekend. “It has been a positive event for the team,” said Dani. “Stage times have been close all weekend. I am really happy to take my second podium alongside Carlos.”

“Firstly, congratulations to our teammates for their podiums,” said Andreas. “We would have liked to fight a couple of places higher up but unfortunately our time loss on Friday prevented that. We still had a positive final day.”

Crunching the numbers, the Argentina result sees us lead the manufacturers’ championship by 15 points over M-Sport and 20 over Toyota. We have taken six individual podium results so far this year but Michel remains cautious. “Argentina has been another reminder that the competition is incredibly close this season.”

The WRC moves back to Europe for round six, another gravel challenge at Rally de Portugal, where we will compete from 17-20 May with a four-car entry.

2018 FIA World Rally Championship for Drivers’ Standings
After round 5

2018 FIA World Rally Championship for Manufacturers’ Standings
After round 5