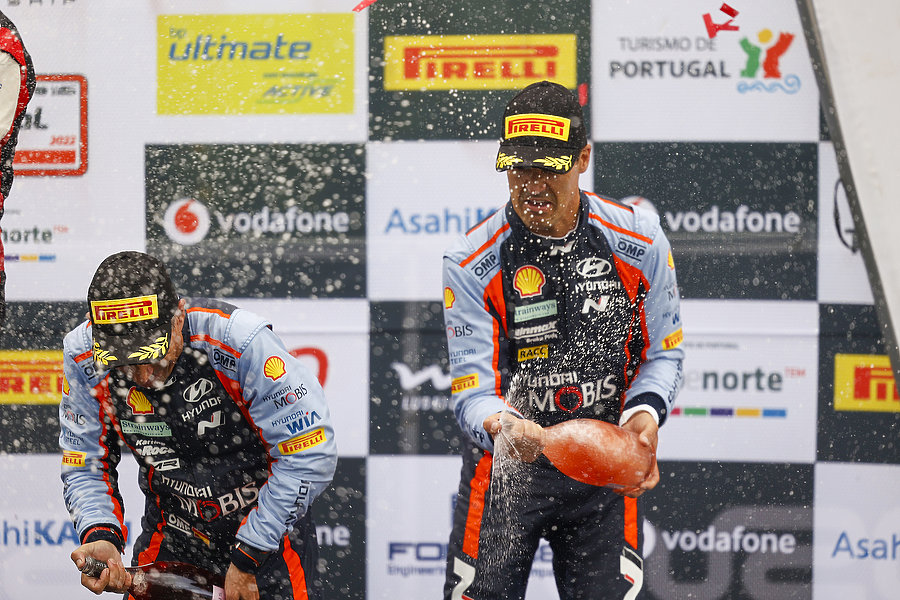 We have continued our run of WRC podium results after Dani and Cándido secured third place in Portugal, in their first appearance in the 2022 season.

Our Spanish crew enjoyed their first competitive taste of the new hybrid powered i20 N Rally1 and earned our team a hard-fought top-three result. Heading into the final day in fourth place, 5.7 seconds adrift, they flew through the iconic Fafe Power Stage to overturn the deficit in style.

“I am really pleased to finish on the podium,” said Dani. “I have given my best all weekend, but I’ve needed to learn the car stage by stage. I am pleased for the team that we can take a top-three result away from a challenging rally.”

It was a weekend of frustrations and fightbacks for our two other crews: Thierry/Martijn and Ott/Martin. Both pairs experienced issues on Friday’s demanding itinerary but battled back through the field, with support from the team, to claim fifth and sixth respectively.

Thierry and Martijn were holding second overall after SS7 (Arganil) when they sustained a
front-left wheel issue on the road section. The repairs subsequently caused driveshaft damage, which dropped them down to seventh. The team’s never-give-up attitude helped the crew bounce back on Saturday, including a dominant stage win in SS15 (Amarante). They consolidated fifth place with another big push in the final stages.

“We have given it everything this weekend,” said Thierry. “We pushed quite hard in the Power Stage to take as many points as possible from this weekend. We have some positives with our car. I feel quite comfortable, and we have shown that the speed is there, but there is more work we need to do.”

Ott and Martin picked up two consecutive punctures on Friday’s SS6 (Góis) and SS7 (Arganil), dropping to tenth overall. Our Estonians ended a tough weekend with a strong performance, taking two stage wins on Sunday and moving back up to sixth place.

“There is no other way to describe our weekend than frustrating,” admitted Ott. “We completed all the stages and we have tried to learn a few different things. Hopefully we can take something away from this rally that makes us a little bit better for the next one.”

Our Deputy Team Director Julien Moncet focused on the positives: “I am happy and proud of everyone in the team that we can score this podium, but our target is to win. We are ready and willing to go one, or rather two steps higher. We know there’s more to come and we want to fight for the win in Sardinia.”

The fifth round of the 2022 FIA World Rally Championships takes place over the weekend of June 2-5 on the gravel stages of Rally Italia Sardegna.

2022 FIA World Rally Championship for Manufacturers’ Standings
After round 4

2022 FIA World Rally Championship for Drivers’ Standings
After round 4