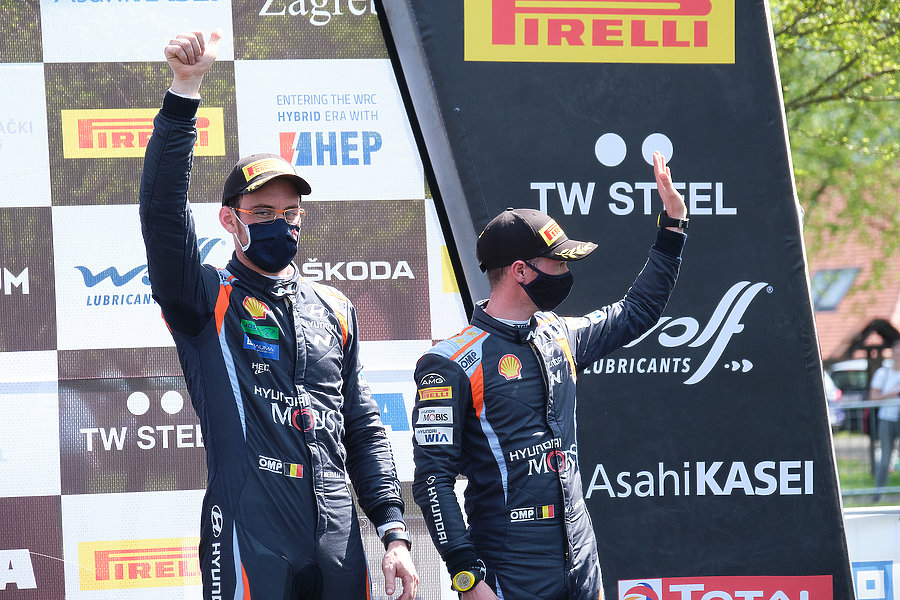 It was an intensely close battle to the finish in the first-ever running of WRC Croatia Rally, as we added another podium to our 2021 results.

Thierry and Martijn – in their third event as a crew – continued their unbroken run of top-three finishes with a fine performance on challenging tarmac roads. The pair were on strong pace throughout the weekend, taking six stage wins to put themselves in victory contention, having led the rally overnight on Friday.

Unfortunately, an incorrect tyre choice on Saturday morning’s opening loop dropped them to third. Despite their valiant efforts, the pace at the front was ultimately too close to reduce the deficit.

“We tried our absolute best all weekend, pushing hard and on the limit of the car’s performance,” said Thierry. “Right up until the Power Stage, we never gave up in what was a very close battle for the victory. We enjoyed the rally and Martijn did a great job.”

Croatia Rally was a new addition to the WRC for this season. It’s varied and often tricky tarmac routes created an exciting but tough new challenge for crews. There was action aplenty from the opening day as we got up to speed with new stages and complex road profiles.

For Ott and Martin, it was a steady but unspectacular rally. Our Estonian crew took a stage win on Friday, one of two 1-2s for our team, but couldn’t quick crack the podium positions. They settled for fourth place overall.

“This has not been the level of performance that we would have expected or hoped for coming to this rally,” said Ott. “I enjoy tarmac rallies but throughout the weekend it has been far out of my comfort zone. It’s just not felt natural, and we’ve lacked the performance edge we needed.”

Craig and Paul also struggled for confidence in their i20 Coupe WRC and were further hampered by a puncture on Saturday’s opening stage. It lost the crew two minutes of time and dropped them to eighth. They did, however, enjoy a strong run in the Power Stage, setting the second fastest time to score four bonus points.

“It was pretty much game over after our puncture on Saturday morning,” said Craig. “We have worked hard to make it feel like home inside the car, but it just hasn’t been the case. At times, it has felt nice, and we’ve been able to give it a push, but globally we needed more.”

In the championship, Thierry has moved up to second place in the drivers’ classification, while we hold second in the manufacturers’ table, 27 off the lead after three events.

Our Team Principal Andrea summarised the event: “I think without the mistake with tyre selection on Saturday, seeing how fast Thierry has been throughout the weekend, he could have been even closer to the front and could maybe even have taken the victory. Looking at the positives, the team has worked very hard, and the car has shown itself to be competitive.”

The fourth round of the 2021 season will move back to gravel roads at Rally de Portugal from 20-23 May.

2021 FIA World Rally Championship for Manufacturers’ Standings
After round 3

2021 FIA World Rally Championship for Drivers’ Standings
After round 3