Ott/Martin take their fifth in a row 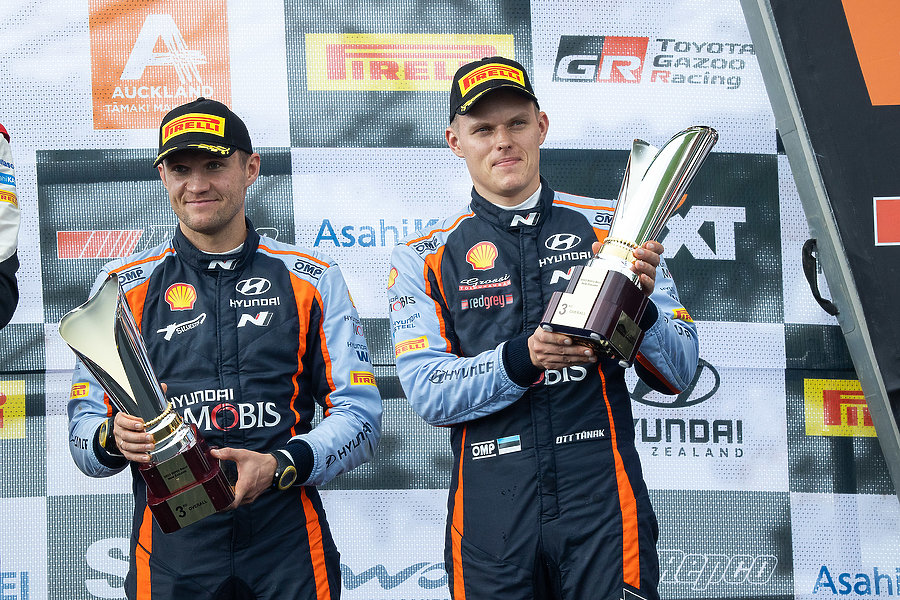 Ott/Martin take their fifth in a row

In our first-ever visit to Rally New Zealand, we have come away with our fifth consecutive podium finish of the season.

Held on largely wet and slippery gravel roads, it was a challenging weekend for our three crews. Ott and Martin enjoyed an encouraging start, taking three stage wins to lead the rally overall by a 0.2-second margin at the end of Friday.

Unfortunately, two separate time penalties for hybrid boost infringements dropped them down the order on Saturday. They continued to extract maximum performance from our i20 N Rally1 car on the final day, adding another stage win and four Power Stage points.

“Rally New Zealand has been a difficult weekend for us, but it’s been a great place to be, on amazing roads and fun to drive,” said Ott. “We have not been up to the pace to fight for the win but we’re still on the podium with a good finish to add points onto the board.”

Thierry and Martijn lacked confidence across the 17 stages and had to settle for fourth position. Our Belgians also picked up time penalties, as well as two spins on the first day.

“It was a bit of a harsh start to the event, so we really couldn’t do much more,” said Thierry. “We need to work on the car in these conditions; I just don’t feel comfortable, and it’s been a bit of a struggle for me to drive and go fast.”

Oliver and Elliott registered their second top-five result in a row with fifth after another valuable weekend of learning.

“It has not been a perfect weekend for sure, so to come away with a fifth-place finish is a real positive,” reflected Oliver. “Thanks to the team for all their preparations for this long-haul event, and to the mechanics for sorting the car after our issues this weekend.”

“A quite frustrating rally for us and definitely not the result we came here for,” summarised our Deputy Team Director Julien. “We had too many issues and a general lack of pace to achieve a better result. Still, we haven’t given up and all three cars made it to the finish.”

Separately, we also extended our congratulations to Kalle Rovanperä and Toyota Gazoo Racing for securing the 2022 drivers’ title.

Julien said: “We are committed to fighting at the very highest level of this championship. The results demonstrated by Kalle and Toyota act as motivation and inspiration for all of us. Their performances this season offer an impressive benchmark. We will not stop pushing to improve our own competitiveness and look forward to close fights in the remaining rallies of this season.”

The 12th and penultimate round of the season, Rally de España, takes place from October 20-23.

2022 FIA World Rally Championship for Manufacturers’ Standings
After round 11

2022 FIA World Rally Championship for Drivers’ Standings
After round 11