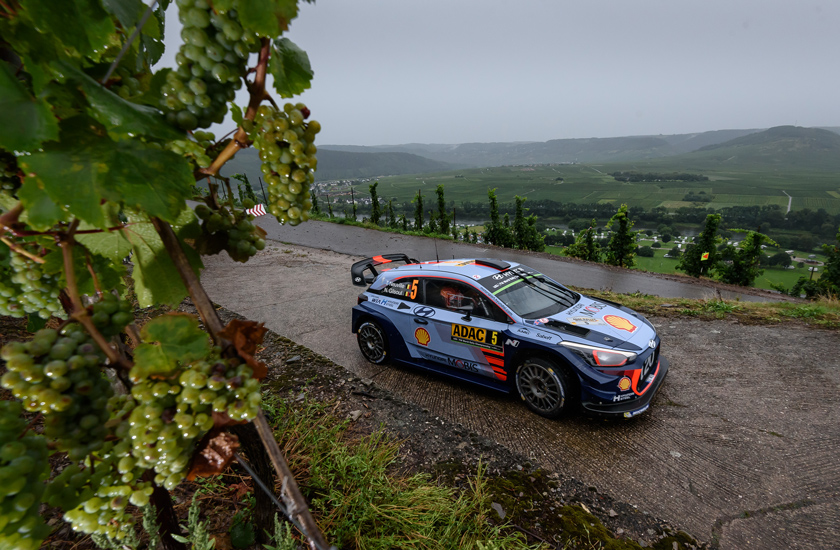 Our championship leading Belgian crew of Thierry and Nicolas have fought through to third place after a difficult start to our home rally in Germany.

Intermittent rain made for a challenging schedule of stages with many crews experiencing trouble throughout the day.

In the unpredictable and often slippery conditions, tyre selection proved to be a highly influential factor. Our crews found themselves struggling to find the confidence to push with the slightest miscalculation punished severely.

Still in the game

“We never really found the right tyre choice for the conditions,” admitted our Team Principal Michel. “On reflection we should have run softer compounds but we have battled through with Thierry and Nicolas moving up into the top-three.”

It was on the final stage of the day, the third run of the weekend so far through the Wadern-Weiskirchen Super Special, where our Belgians’ fortunes seemed to turn, as they moved up into third.

“We are still in the game,” said Thierry, “but we will definitely be looking for a better run on Saturday. It’s been tough from start to finish. I am pleased to have made it through, and it is a relief that we are in a provisional podium position.”

On a day of highs and lows, we scored two more stage wins. Dani and Marc took the first of these in SS2, and led the rally by 1.5-seconds. Unfortunately, it was short-lived happiness for our Spanish crew.

“After some tough rallies we were hoping to demonstrate our speed on the German tarmac,” said Dani. “Things started well but tyre selection was not straightforward. We had some difficulties under braking and went off at a corner in SS4.”

Our mechanics have repaired their car, which was not too badly damaged, and they will re-join under Rally 2 tomorrow.

Hayden and Seb also endured misfortune with a slow puncture in the same stage. It was a further hindrance to our Kiwi and his British co-driver.

“We entered this rally knowing, for us, that it would be one of the hardest of the season,” commented Hayden. “It was tougher than we expected. The conditions were horrible and there was no clear direction on tyres. We now need to refocus on our aim of scoring as many points as possible.”

Saturday’s itinerary is the longest of the weekend with 146.67km of special stages, including two runs through the renowned 41.97km Panzerplatte.

“We are all hoping for a less chaotic day as we aim for another solid home result,” said Michel.