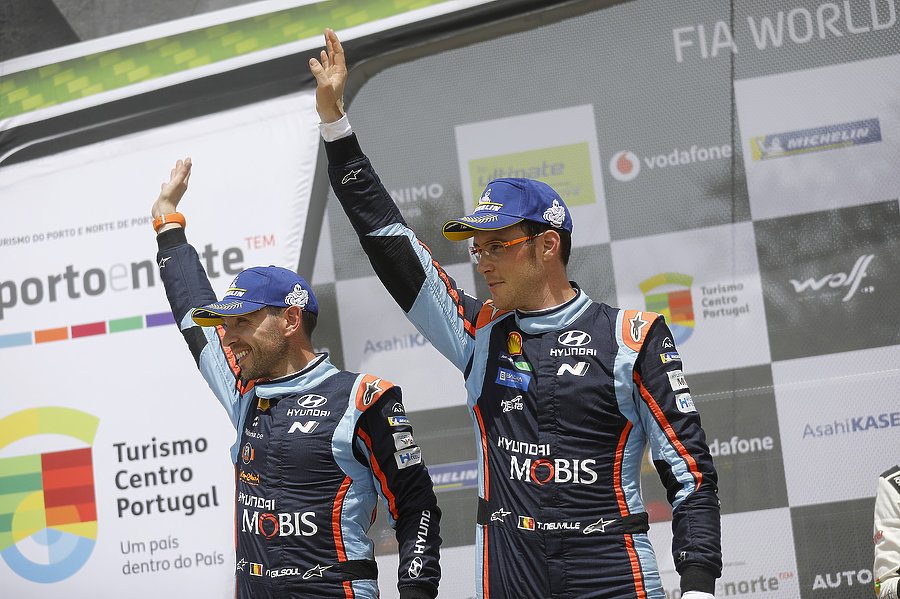 As the 2019 season reaches its halfway mark, with seven events now completed, we hold onto the lead in the manufacturers’ championship with a 20-point advantage. Thierry, meanwhile, retains third place in the closely contested drivers’ table, ten points behind leader Sébastien Ogier.

Fans flocked to the famous Fafe jump on the final morning to see the WRC cars fly through to the finish in spectacular fashion. It was a fitting end to a gruelling weekend.

Our rally was hampered from the opening day when Dani/Carlos and Sébastien/Daniel were affected by technical issues on the same stage (SS3 – Arganil). Dropping down the order, we then had to regroup as a team to salvage as many points as possible from the weekend.

The combined team efforts paid off with our Team Director Andrea quick to praise the work of all three crews, but in particular our Belgians. “Thierry and Nicolas are having a great season with the tools we are giving them,” he said. “They continue to score results that flatter our performance level. I am upset that our issues on Friday prevented our two other crews from competing for the podium; another missed opportunity.”

For Thierry, his fifth podium of the season was a welcome result. “After the big crash we had in Chile, it was important to come back fighting,” he said. “It’s not been an entirely smooth weekend but we have shown some strong pace including several stage wins. The championship is nicely poised as we reach the halfway point.”

Dani and Carlos led the rally briefly on Friday morning. They scored two stage wins and ended a difficult event with a Power Stage point.

“We tried to put the disappointment and frustration from Friday behind us, and to enjoy these great Portuguese stages,” said Dani. “We have put in a full team effort this weekend so I think we all share in the podium result, even if it would have been nicer to be standing on the podium ourselves.”

Sébastien and Daniel, too, were unable to reap the rewards of a strong performance. “We were able to set some competitive times, which shows what might have been possible,” said Sébastien. “I am happy for the team to get a podium finish after what has been a tough event.”

The championship moves onto Rally Italia Sardegna, which takes place June 13-16 with Thierry/Nicolas, Andreas/Anders and Dani/Carlos driving our trio of i20 Coupe WRC cars.

2019 FIA World Rally Championship for Drivers’ Standings
After round 7

2019 FIA World Rally Championship for Manufacturers’ Standings
After round 7