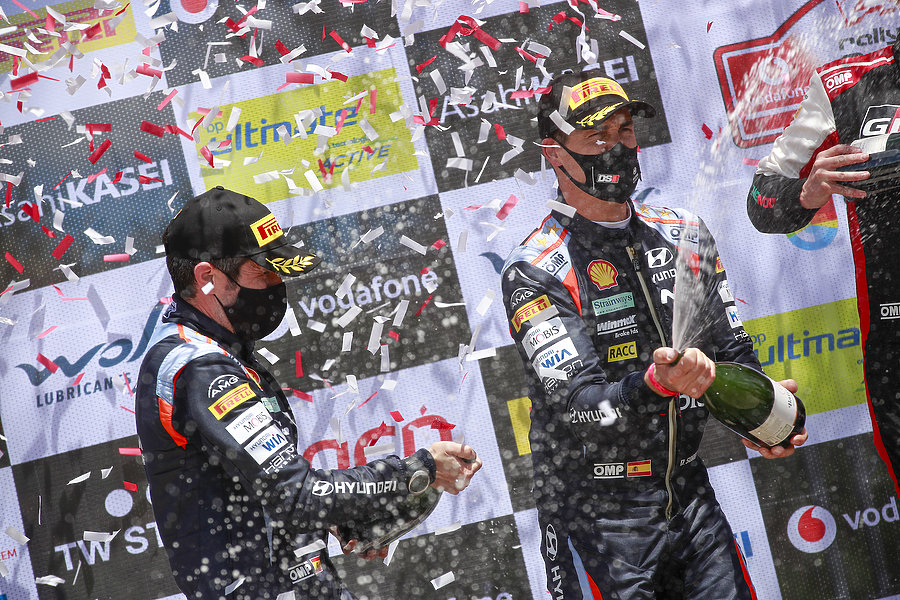 We have taken our fourth consecutive podium of the WRC season with Dani and his new co-driver Borja securing a strong second place at Rally de Portugal.

In their debut rally as a crew, our Spanish duo showed their potential with four stage wins over the weekend and demonstrated their intent to fight for victory.

“I am very happy to come back to take second place in Rally de Portugal,” said Dani. “To finish the rally and to take points for the manufacturers’ championship is important. I am also delighted to share the first podium with Borja in our first WRC event as a crew.”

All three of our crews were on outstanding form on Friday with our i20 Coupe WRC showing competitive pace. The repeated loop of Lousã, Góis and Arganil saw us take five 1-2s with Dani, Ott and Thierry locking out the provisional podium after the second pass. Sadly, misfortune was to strike on the subsequent stage, SS7 Mortágua, as Thierry and Martijn hit the bank and caused irreparable damage to their car.

Valiant work from our team of mechanics allowed our Belgian crew to re-join on Saturday, but unresolved issues prevented them from completing the day. They went onto salvage four points from a fine run in the Fafe Power Stage on Sunday, but it was not the rally that they had planned.

“I am really disappointed for the team not to have delivered in this rally,” said Thierry. “We had the pace and the car for victory but, unfortunately, I let everybody down with a mistake. We were too optimistic. I misjudged the corner, which brought our rally to an early end.”

Similar issues hampered Ott and Martin’s rally. Our Estonian crew had scored an impressive run of stage wins – including a hattrick on Saturday morning’s loop of Vieira do Minho, Cabaceiras de Basto and Amarante – to build up a strong lead of 22.4-seconds. Unfortunately, they too suffered rear suspension damage in the repeat of Amarante that ended their day early.

Re-joining on Sunday, the target was clear: fight for Power Stage points. In a masterful performance on Fafe, with its iconic jump, Ott/Martin flew to the fastest time to claim five extra points for the drivers’ and manufacturers’ championship, ahead of Thierry/Martijn in second.

“It was a good feeling in the Power Stage to be back on the pace,” said Ott. “Looking at the positives, the pace is definitely improving. It’s been a long, hard job by many people, who have put in a lot of effort. It’s now giving me a feeling of anticipation for the rest of the season. We’ve been working hard, so we expect results.”

For our Team Principal Andrea, it was a weekend of frustration but with a positive outlook.

“We have brought home a second place thanks to Dani and Borja, but the start of the event had promised much more. All of my people have worked so hard in these past months, they deserved more from this rally. We have shown we have car performance so now we have to deliver results. We have the opportunity to do that in Sardinia soon. In the end, everything will be good; if it’s not good then it’s not the end.”

The 2021 season continues on the gravel roads of Rally Italia Sardegna from 3-6 June.

2021 FIA World Rally Championship for Manufacturers’ Standings
After round 4

2021 FIA World Rally Championship for Drivers’ Standings
After round 4