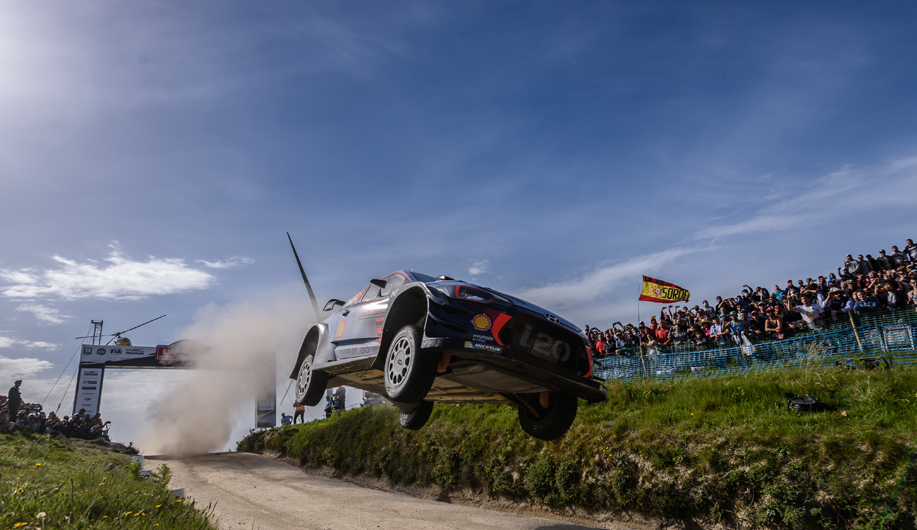 There’s nothing quite like the famous Fafe jump to bring Rally Portugal to a thrilling finale – and it certainly delivered on its promise!

Dani and Marc made it a double podium celebration by securing third place. What a way to achieve our first-ever Portuguese podium result!

“We achieved our objectives,” summarised our Team Principal Michel. “When Ogier has a 16-second lead on the final day, you know it’s going to be tough. But our crews did a good job, while also putting on an exciting show in front of thousands of spectators.”

The stages were lined with cheering crowds throughout the day but especially watching in awe as the cars launched over the iconic Fafe jump.

Thierry and Nicolas were one of the quickest crews through the Power Stage, adding four valuable points to their season total. Their performance continued an unbroken run of Power Stage points.

“We struggled with the rear of the car a bit this weekend,” admitted Thierry, “but I am pleased with second place. We just couldn’t match M-Sport and Ogier this time. We have taken another good haul of points, which is very important for both Drivers’ and Manufacturers’ Championships.”

Our Spaniards Dani and Marc received plenty of support in Portugal and rewarded their fans with a second podium finish of the season.

“I’m delighted with this podium,” said Dani. “I was a bit disappointed on Saturday not to be closer to the front, so I just focused on Sunday morning to secure third place. It was a fun and enjoyable weekend; the support of the spectators was incredible.”

Hayden and Seb were determined to show their true pace after a weekend beset by problems. Two stage wins on Sunday morning sent a strong message. For the first time this season, all three of our crews registered stage wins over the weekend. Our #4 crew’s successes on Sunday brought the team’s Portugal total to an impressive nine.

“The team has never given up all weekend,” said Hayden. “They seem to dig deeper with each rally. The fact we won two stages on Sunday morning reinforced what might have been without our troubles. The Power Stage was fun and Seb did an amazing job. There are encouraging signs for the future.”

The Portugal podiums mean we strengthen our second place in the Manufacturers’ Championship with 173 points, 26 behind M-Sport.

Thierry has moved up to second in the Drivers’ Championship closing the gap to Ogier. Our Belgian has 106 points compared to the Frenchman’s 128 after six rounds of 13.

As we approach the halfway point of the season, we will head to Sardinia for round seven in high spirits. “Sardinia will offer another challenge,” added Michel. “We have happy memories from last season’s win, which we will definitely want to repeat.”

2017 FIA World Rally Championship for Drivers’ Standings
After round 6

2017 FIA World Rally Championship for Manufacturers’ Standings
After round 6