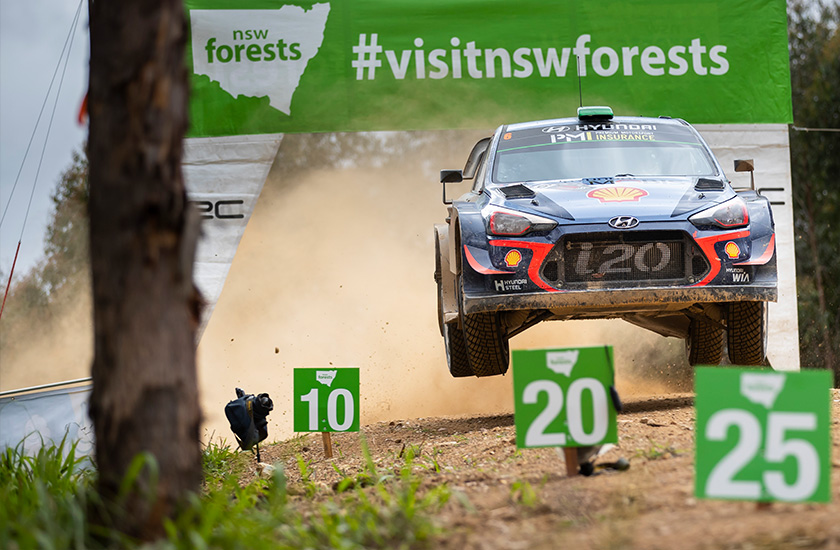 We have ended the 2018 WRC season with a strong second place in Rally Australia, as well as finishing runners-up in both drivers’ and manufacturers’ championships.

On a dramatic final morning down under, Hayden and Seb secured second place to take their best result of the season. “This feels like a proper podium,” exclaimed Hayden. “We’ve made good strategy calls all weekend and I’ve felt comfortable in the car. Thanks to the team and to the travelling Kiwi fans who have come out in their droves to support us.”

Our Team Principal Michel added: “Hayden and Seb have hardly put a foot wrong all weekend and this result is thoroughly deserved.”

For championship contenders Thierry and Nicolas, it was a heartbreaking final day. Our Belgians retired at the start of Sunday’s second loop after clipping a tree causing terminal damage to their i20 Coupe WRC.

“We gave it everything and had to take some risks today to try and capture the title,” said Thierry. “Even it was only a small chance, we had nothing to lose. It has been a difficult and tricky weekend, and not the way we wanted the season to end but it’s part of the game.”

At the end of Rally Australia, Andreas reflected on a difficult season. “It has been a troublesome year for me,” he admitted. “This weekend is a perfect example; we’ve been quick and competitive at times but our event has been overshadowed by pure bad luck. We have had great support from the team and we’re all pushing in the right direction.”

We are proud to have played our part in a truly incredible season: “This has been one of the most closely fought championships for years,” said Michel. “We have utmost respect for our rivals and our congratulations go to Sébastien for the drivers’ title and to Toyota for the manufacturers’. We will now look back on the highs and lows of our season as we prepare to come back fighting in 2019.”

“I would like to say thanks to the team and everyone at Hyundai Motorsport in Alzenau for giving us the car to fight for the title this year,” concluded Thierry. “It’s been a great season for WRC and we’ve attracted some new fans, so now we have a short break and we can look ahead to another season.”

2018 FIA World Rally Championship for Drivers’ Standings
After round 13

2018 FIA World Rally Championship for Manufacturers’ Standings
After round 13