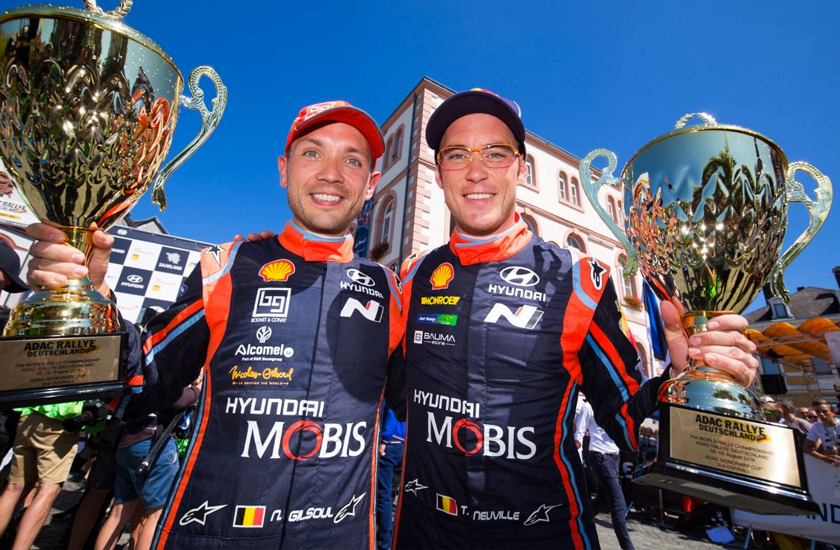 On a dramatic final day in Germany, our Belgian crew Thierry and Nicolas finished in a strong second position to take our ninth podium result of the 2018 season.

The result enabled Thierry to extend his lead in the WRC drivers’ championship to 23 points over Sébastien Ogier, with Rallye Deutschland winner Ott Tanak closing the gap to second.

“It has been a challenging weekend,” admitted Thierry. “To come away with second is a job well done.”

The #5 crew added an extra point in the Bosenberg Power Stage but had to accept a few missed opportunities. “I was hoping for a few more points in the Power Stage but unfortunately I made a mistake,” continued Thierry. “The championship battle is going to be closely fought right to the end of the season!”

There was drama from the very first stage on Sunday morning, the first of two runs through the 29.07km Grafschaft test. Having started the day in second place, our Spaniards Dani and Carlos went off into the vineyards. Although they made it to the stage-end, the damage to the car ended their promising performance agonisingly early.

“The car felt amazing with lots of grip,” said a disappointed Dani. “I had a lot of confidence. I was a bit late braking into a corner with some gravel in the road that sent us wide. We take comfort from knowing we were able to fight for the podium.”

Our Norwegians Andreas and Anders were elevated to sixth as a result, picking up valuable points for the manufacturers’ championship. “We have a lot of homework to take away from this rally,” said a pragmatic Andreas.

Still, the points scored from Germany were enough to continue our position at the head of the classification, albeit with a reduced 13-point gap to Toyota in second.

Our Team Principal Michel was keen to find the positives from a tricky weekend. “It has not been ideal but second place is still a good result. Even if we have lost some ground, there is a lot more to come. It remains a challenging  and exciting  championship!”

The next round of the season will be new territory for everyone. Rally Turkey returns to WRC for the first time since 2010, but in the Marmaris region, taking place from September 13-16.

2018 FIA World Rally Championship for Drivers’ Standings
After round 9

2018 FIA World Rally Championship for Manufacturers’ Standings
After round 9