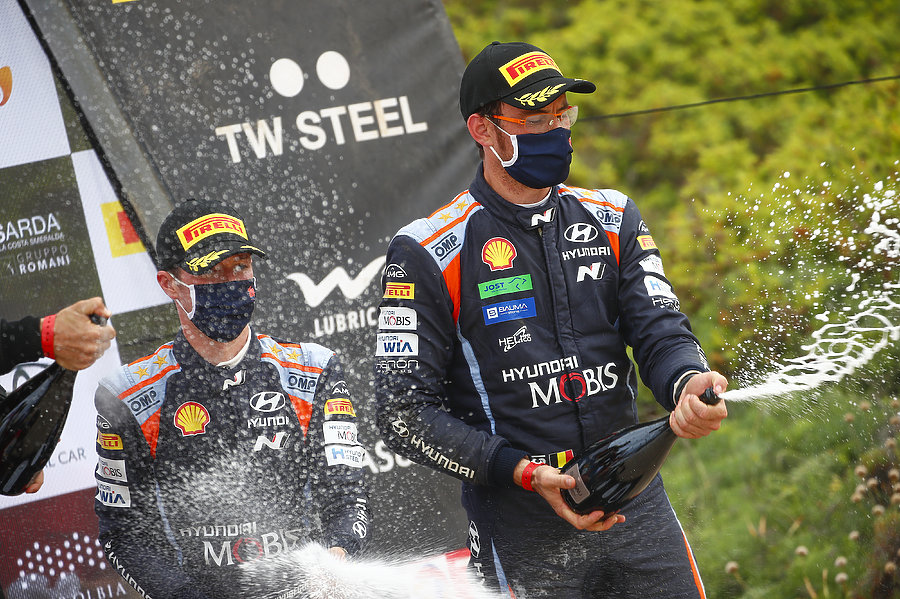 Thierry and Martijn finished Rally Italia Sardegna in third place – their fourth podium of the 2021 season – but it was an event that had promised so much more for our team.

Hopeful of a strong result in a rally at which we had taken four wins in the past five seasons, Friday was certainly a promising start. All three of our crews – including Ott/Martin and Dani/Borja – were on fast form as we took a clean sweep of stage wins.

The rough gravel surface of the Sardinian roads kept us grounded, despite our Estonian crew building up an almost 20-second lead after the opening eight stages. Our caution was well founded as Saturday saw any hopes of another victory cruelly snatched away.

Ott/Martin had doubled their advantage to 40.5 seconds, but they hit a rock in the SS12 Lerno-Monti di Alà stage, which forced them to retire. Dani/Borja, too, ran into trouble on the later Bortigiadas-Aggius-Viddalba stage, going wide and hitting a stone that caused them to roll their i20 Coupe WRC. Our Spaniards were out for the day, having held second place.

While both crews would re-join on Sunday in a bid to score Power Stage points, it was Thierry and Martijn who salvaged a podium finish as consolation, paying respects to the team’s efforts.

“I’d like to extend my thanks to the team, including everyone in the workshop,” said Thierry. “After Portugal they had one-and-a-half days to repair the car; they made everything like new. We bring home a podium at the end of a disappointing weekend.”

Our Belgian crew also claimed five extra points with the fastest Power Stage time, with Ott/Martin in second, for whom it was another frustrating rally. “It has not been a happy weekend,” said Ott. “The team has done a great job to get me up to this level. The car is really fast, it’s improved a lot, so there is nothing stopping us.”

Dani and Borja – in their second WRC event as a crew – took a Power Stage point but had to reflect on a tough weekend. “The only positive at the end of this tough weekend is that we have been able to take some points for the manufacturer’ championship,” said Dani. “We go home a bit disappointed but sometimes rallying is like this.”

Our Team Principal Andrea summarised: “We are not happy with the result, but we know that if we go ahead as we are, working together, we can catch up. Hyundai Motorsport is a big team, but hard work pays dividends, as we have seen with a 1-2 in WTCR at the Nürburgring, Jari doing an amazing rally in WRC 2, and with the improvements we have made to the WRC car. My people have done an incredible job and I’m thankful and moved to hear our drivers commend their work.”

One of the most anticipated events on the 2021 WRC calendar awaits in three weeks’ time as we head to Safari Rally Kenya, which promises to be an exciting new challenge.

2021 FIA World Rally Championship for Manufacturers’ Standings
After round 5

2021 FIA World Rally Championship for Drivers’ Standings
After round 5